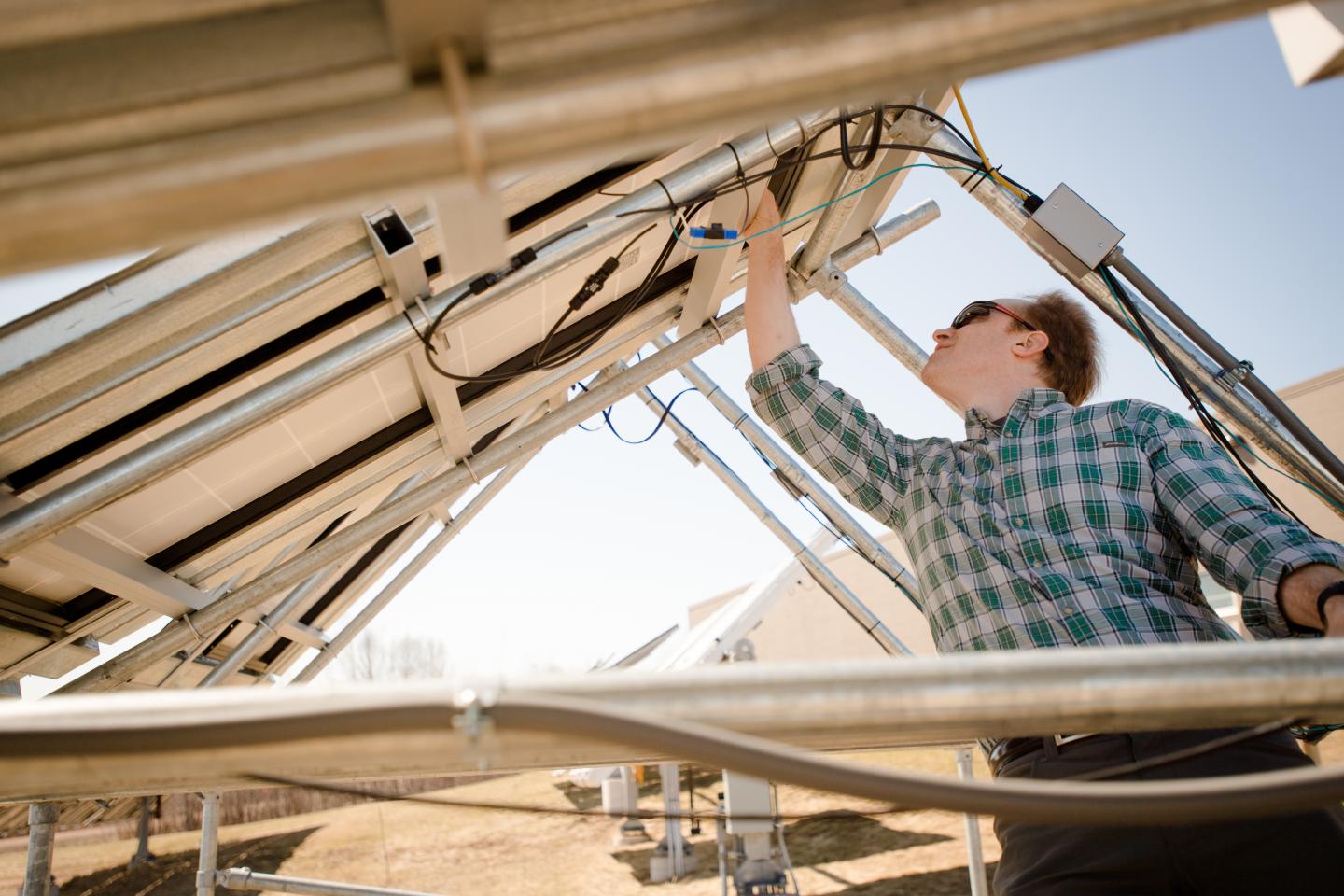 Joshua Pearce, professor of material sciences and electrical engineering at Michigan Technological University, has found a way to lower cost of solar power by 10 percent, which could drive investment in the industry.

At the end of one of the hottest summers on record, as fights about how to power homes rage, renewable solar energy continues to present an option that does not significantly add greenhouse gases to the environment in exchange for lighting and cooling our homes. And it's just been given another edge through material science.

In a new study published in Energies, researchers have found a way to reduce production costs of solar cells by more than 10 percent.

"Improving cost per unit power at the cell level can have massive effects downstream," says Joshua Pearce, professor of material sciences and electrical engineering at Michigan Tech. Already, he says, costs of solar energy are comparable to conventional forms of electricity and is the fastest growing energy source. This 10 percent drop should push solar to the forefront even faster.

Silicon is the standard light-capturing material used in solar photovoltaic (PV) cells. It comes in two main forms: perfect crystals that cost more and produce higher efficiencies and multicrystalline silicon that cost less, but offers lower efficiencies. With common etching to reduce reflected light both types still lose some light, which is what gives most solar panels their blue color.

Researchers already knew that nano-texturing silicon with dry etching makes black silicon (black-Si) that is more efficient at capturing light than standard etching treatments. It has no color because the dry etching process takes a normally flat silicon surface and "etches it into a forest of nanoscale needles," Pearce says. "Those needles grab the light and don't let it get away. It's like looking into the eyes of Darth Vader."

Normally such a high surface area with many surface defects would hurt electrical performance, but researchers at Aalto University found that when the silicon is also treated with an appropriate atomic layer deposition (ALD) coating, the effects of surface defects are mitigated.

Typical thinking has been that the cost of black-Si cells from dry etching and ALD are too expensive for practical use, especially in an industry where, Pearce says, "margins are extremely tight. Everyone's trying to push costs as low as possible."

However, the results of their study shocked even Pearce. While researchers did find that production of individual black-Si passive emitter rear cells (PERC) were between 15.8 and 25.1 percent more expensive than making conventional cells, they also found that the efficiency gains and the ability to go to the less-expensive multicrystalline silicon starting material far outweighed those extra costs: overall the cost per unit power dropped by 10.8 percent.

The Future of Renewables and Solar Energy Production through Material Science

Black is not only better than blue when it comes to solar panels. The improvements could start to beat out renewables' top energy competitor in the climate change arena.

He adds, "This study points to where the future is going to go in PV manufacturing and what countries might want to do to give themselves a competitive advantage."

Teaming Up Across the Atlantic for Solar Energy Efficiency

Pearce completed this study while on sabbatical as a Fulbright distinguished chair at Aalto University in Finland. He worked with the Hele Savin's Electron Physics Group and had access to their data on these processes. Researchers were also able to get information on manufacturing costs from companies, which is not public, but were allowed to use for this study, along with published literature on solar cells.

While the spot price for solar cells may change day by day - or even by hour - the results still hold. "That's 10 percent decline between cell types from whatever the number is that day," he says. This is because the comparisons were made on relative costs, not absolute costs. That's also why arbitrarily fluctuating tariffs were not factored into the calculations.

What's Next for Solar Energy and Renewables

Pearce says that while the production process can still be optimized to pull out a few more percentage points of efficiency, the next step for this study is to be used by policy makers to accelerate PV manufacturing. For a country like China, which already dominates global PV manufacturing, "to make this relatively small change is pretty trivial." The European Union, which currently makes a lot of the manufacturing equipment, should also "look carefully at scaling up deep reactive ion etching and ALD tools to meet the needs of the rapidly expanding PV market". He hopes that countries like the U.S., which used to dominate the solar field, will use this data at a policy level to leap frog international manufacturers, and invest in producing the new machines to manufacture these types of solar cells.

"I don't know which technology will end up being the one to dominate the solar field," he said, however "The study shows the clear economic impetus to move in the direction of dry-etched black silicon PERC that wasn't there before."

This study was conducted with Chiara Modanese, Hannu Laine, Toni Pasanen and Hele Savin from Aalto University in Finland.