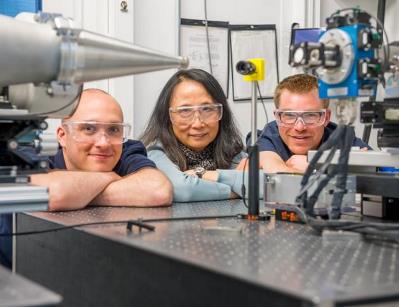 By splitting a water molecule into two atoms of hydrogen and one of oxygen, scientists can use the boundless energy of the sun to make a clean fuel. In a new study from the U.S. Department of Energy's (DOE) Argonne National Laboratory and Harvard University, scientists have for the first time been able to see an especially important step in the water-splitting process, which may bring us closer to abundant solar energy for all.

Splitting a water molecule requires a metal catalyst to get the reaction going. Recently, much scientific attention has focused on cobalt, a relatively abundant and inexpensive catalyst that - in the right circumstances - can serve as an escort to an electronic dance between hydrogens and oxygens.

"Essentially, it allows you to have a focused snapshot, as opposed to just seeing a chemical blur. It's important that we determine the characteristics of the catalyst on the timescale the electrons are moving."

"Cobalt oxygen-evolving catalysts are the active components in technologies like artificial leaves and other materials in which you can harvest light to drive the synthesis of solar fuels," said Argonne postdoctoral researcher Ryan Hadt, a co-first author of the study.

The overall water-splitting reaction actually has two halves. The researchers focused on the first half, called water oxidation, which requires the transfer of four protons and four electrons and eventually results in the formation of an oxygen-oxygen bond. For this process, the oxygens need a temporary dance partner, which is played by the cobalt catalyst.

But the reason this dance isn't yet well understood is that the transfers and the formation of the bond happen in a flash - the whole process takes less than a billionth of a second. To understand the nuances of the bonding action, the researchers needed to perform X-ray absorption spectroscopy measurements at Argonne's Advanced Photon Source.

In their analysis, the researchers focused on a particularly intriguing chemical twist. At the beginning of the process, a bridge of two oxygen atoms connects two cobalt ions. Each of the cobalt ions, in turn, is connected to its own water molecule. At this point, things are pretty stable.

The electronic dance is ready to begin when a cobalt ion adds an additional positive charge, temporarily increasing a characteristic number that scientists term an "oxidation state." In the case of cobalt, the oxidation state changes, just for an instant, from three to four.

When two cobalt ions with an oxidation state of four come into contact, the process begins in earnest. The charge transfers cause the hydrogen atoms of the water molecules to dissociate from their oxygen bonds, leaving the cobalt atoms bonded just to oxygen ions.

The key moment follows immediately afterwards, when the cobalt centers each receive an extra electron from the newly exposed oxygen atoms. When this happens, a bond is formed between the two oxygens, creating a molecular intermediate stage called a peroxide, which can be rapidly oxidized to release a dioxygen molecule. The electrons obtained from water during this process can be used to make solar fuels.

By using the Advanced Photon Source, a DOE Office of Science User Facility, the researchers were able to directly measure cobalt oxidation states and then use theory to a calculate a quantity known as "exchange coupling," a quantum mechanical value that identifies the relationship between the spins of the electrons that are shuttled between the oxygen and cobalt atoms. The researchers found that these electrons spins are in opposite directions - in scientific parlance, they are antiferromagnetically coupled.

"Antiferromagnetism plays an important role in the formation of the oxygen-oxygen bond," said Hadt, "as it provides a way to simultaneously transfer two electrons to make a chemical bond."

Argonne postdoctoral researcher and study author Dugan Hayes also pointed to the unique ability of the Advanced Photon Source to resolve the location of the extra-oxidized cobalt atoms. "Essentially, it allows you to have a focused snapshot, as opposed to just seeing a chemical blur," he said. "It's important that we determine the characteristics of the catalyst on the timescale the electrons are moving."

A paper based on the research, "In situ characterization of cofacial Co(IV) centers in Co4O4 cubane: Modeling the high-valent active site in oxygen-evolving catalysts," appeared in the March 27 edition of the Proceedings of the National Academy of Sciences.