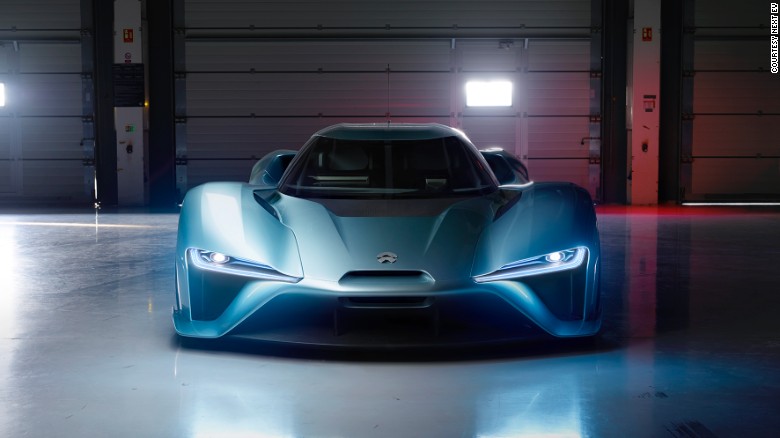 It's not often that a start-up can claim to be a world-beater from the off. But that's precisely what's happening in the auto industry, where Chinese unknown NextEV has launched what it claims is the world's fastest electric car.

Pure-electric cars have been around for decades but only in the past five years or so have the mainstream manufacturers really started to take them seriously -- prompted by tightening rules over when and where conventionally powered vehicles can be driven, and battery technology that has made them more usable in the real world.

As such, there have already been a few upstarts, most notably Elon Musk's Tesla, which confounded the giant car brands by launching precisely the vehicle they said was impossible at the time: a luxury executive saloon with a range of more than 200 miles.

Truth be told, Tesla's offering will still out-accelerate NextEV's NIO EP9 up to a point. But the NIO EP9's pace has been judged over more than just a quarter-mile drag race; this one-megawatt (1,341bhp) creation has, in fact, proven its mettle around the famed Nurburgring in Germany, a 12.9-mile monster of a race circuit known simply as 'The Green Hell.'

Breaking records
The 195mph NIO EP9 has lapped the track, NextEV claims, in just 7m 05.12sec, or around 17 seconds faster than the previous electric car record. Indeed, to put it in context, the EP9's time is only beaten in the all-time list by four road-legal cars, two of them thinly disguised racers, and the other two supercars from Porsche and Lamborghini.

And yet the EP9 can be recharged from flat in as little as 45 minutes, to offer a range of more than 265 miles. There is no guarantee that it will deliver this in production, but if it does, it has the potential to rewrite the rules of the hypercar market.

NextEV has committed so far to six examples, all reserved for the company's initial investors. But, even with each EP9 costing around $1.2 million to build, the firm may consider an additional small production run, if only to raise its global profile further.

China is a hotbed of EV activity because crippling pollution in many cities has persuaded Beijing to open up that side of the business to 'non-automotive' companies. Some, like NextEV and telecoms giant-turned EV developer LeEco, appear to have enough backing to not only deliver a car, but to reach global customers.
China's growing electric vehicle market

They are not alone in sharing that ambition. Earlier this year, the state-owned Beijing Auto International Corporation launched an EV sub-brand called ArcFox with a creation called the ArcFox-7. It has a 603bhp electric motor, is made mostly out of carbon fiber and can reach 60mph in less than three seconds -- though its top speed is more modest than the EP9's, at 155mph. Its range is more limited too, at 186 miles.

Another brand, TechRules, has been testing an innovative hybrid supercar around the UK's F1 GP venue, Silverstone. What does it take to restore the finest cars? 10,000 hours and a lot of cash

The most impressive car restorations
The car carries the unusual moniker TREV, which actually stands for Turbine-Recharging Electric Vehicle, and it mixes plenty of cutting-edge tech -- including carbon fiber construction, a small lithium-ion battery pack and four-wheel drive -- to deliver a theoretical top speed of more than 217mph, while potentially running for more than 1,242 miles between fill-ups.

Even the choice of fuel is open to interpretation; one version of the car, called AT96, can run on aviation fuel, diesel or petrol, while the other, called GT96, is powered by natural gas.
Read: Inside China's largest ghost town

Qiantu Motor's K50, another 2016 debutant, sits just below supercar territory, but even so, its mix of aluminum and carbon fiber construction, and four-wheel drive through a pair of electric motors, brings performance that will match many European creations -- a top speed of 125mph and, more importantly, 0-60mph in less than five seconds.