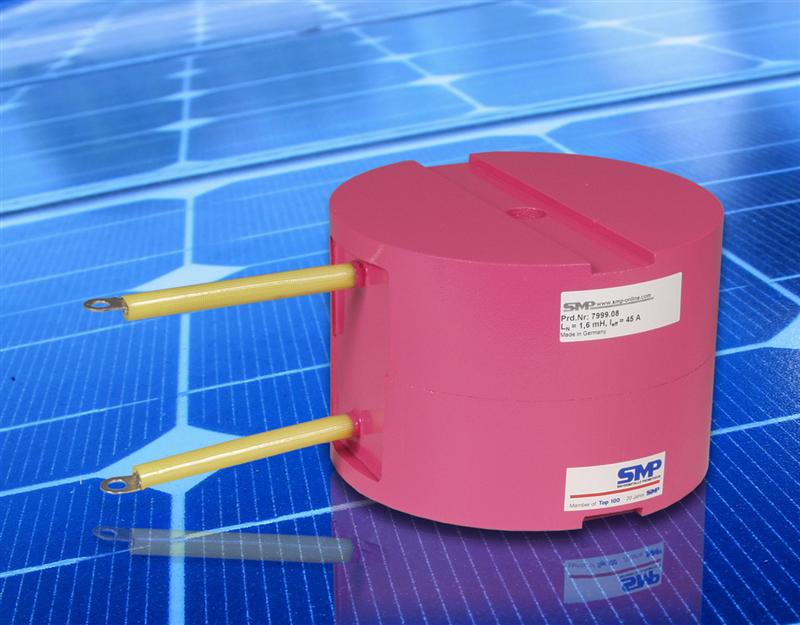 SMP is presenting chokes for solar power inverters at this year's Intersolar, the international trade fair for solar technology in Munich, Germany. These compact inductive components feature low losses and very low stray fields, and meet the demand for ever higher efficiency. The chokes' cores consist of powder composites with low magnetostriction, which SMP specifically engineers for this application. With their low eddy current and hysteresis losses, the materials contribute to the chokes' exceptional efficiency. Their encapsulated design ensures that the power converters emit only low-intensity stray fields - another requirement for chokes for solar power inverters, which allows other components to be placed in close proximity to the choke without running a risk of magnetic interaction. With their compact design, SMP's chokes occupy 25 percent less space than conventional components. To allow their use in residential areas, the chokes operate extremely quietly. Beside solar power inverters, SMP's inductive components are used in inverters for wind turbines and photovoltaic plants, in railway engineering and medical engineering as well as in drives and power electronics. SMP supplies chokes and filters for frequencies up to 200 kHz and current ratings up to 1000 amperes. The components are available in sizes ranging from 36 to 300 mm diameter and weighing from 50 g to 130 kg. All products are RoHS- and REACH-compliant and the materials used are UL-listed. Company information: SMP Sintermetalle Prometheus GmbH & Co KG develops and manufactures inductive components and magnetically soft materials, cores and mouldings. Based in Graben-Neudorf near Karlsruhe, Germany, the company was founded in 1982 by Vasilios Gemenetzis and today employs 250 people. Research and development have been key aspects of the company's philosophy ever since its foundation. SMP's product range includes low-loss inductive custom components based on in-house-developed powder composites, such as filter, commutating, step-up converter, power recovery and single-conductor chokes. Many of its products are used in the railway industry. The market for inverters for photovoltaic systems that feed solar energy into the electricity grid and for converters for wind turbines is also experiencing strong growth. SMP has become one of the key global suppliers of magnetically soft materials for industrial applications, serving customers throughout the world. www.smp.de