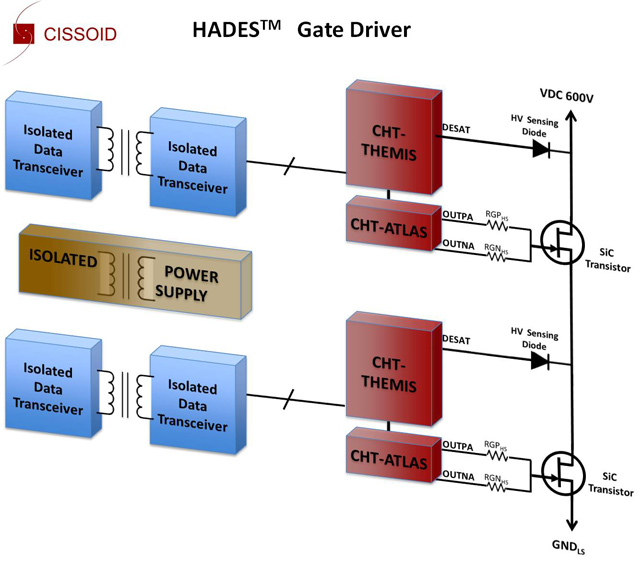 CISSOID, the leader in high-temperature and high reliability semiconductor solutions, unveils THEMIS and ATLAS, their power transistor driver chipset meant for high efficiency motor drives and power converters. THEMIS and ATLAS are especially designed to drive seamlessly the most advanced power switches, including Silicon Carbide (SiC) MOSFETs and JFETs as well as Silicon IGBTs and MOSFETs. The chipset is the cornerstone of energy-saving, reliable power converters and motor drives. THEMIS and ATLAS are respectively the controller and the push pull driver stages of the power transistors. ATLAS features 2 distinct channels capable of sourcing (or sinking) 2A each to the gate of the power transistor, hence 4A total. For applications that require higher power, the solution is scalable and can control up to 5 ATLAS circuits per THEMIS, with a current of up to 20A to drive the gate of the power transistors, which can typically turn on/off SiC transistors in less than 50 ns. A complete set of built-in protection features such as under-voltage lockout, de-saturation detection, soft-shutdown and active miller clamping are included, facilitating the electrical design and reducing the bill of material. Like all CISSOID products, THEMIS and ATLAS are guaranteed for operation up to 225°C with lifetimes a decade greater than any existing solution in the market today. Thanks to such high reliability, designers can place THEMIS and ATLAS drivers next to the SiC die, reducing the parasitic inductance to a few nH and hence reducing switching losses because of faster transitions. Lower switching losses allow increased switching frequency of power converters, which in turn reduces the size of passive components. Pierre Delatte, CTO at CISSOID emphasized: "The main benefit of SiC is the possibility to run power converter switches with much faster transitions and with a higher operating temperature than traditional silicon IGBTs. These two characteristics bring higher power efficiency and reduce the need for cooling. However, the limitation was coming from the devices driving the SiC switches: existing solutions are too complex and have to be located remotely because of poor reliability at temperatures above 150°C, even though the SiC devices themselves can withstand much higher junction temperatures. Remote drivers introduce parasitic inductances that bring the performance down. THEMIS and ATLAS solve this problem: they can be located next to the power switches, which facilitates the electrical design and allows taking full advantage of SiC performances. Power electronic and mechanical designers can now focus on higher efficiency, higher power density, smaller and lighter systems, simplified cooling, higher operating temperature, and higher reliability." The new chipset THEMIS/ATLAS from CISSOID will find immediate applications in aeronautics, where reduction of weight and size is a must, without compromising the reliability: new generation of electric actuators in replacement of traditional hydraulic actuators, as well as electrical power conversion and generation systems, can immediately benefit from THEMIS-ATLAS. Similarly, in defence, railway, renewable energy and generic industrial applications, the high power density solution enabled by CISSOID is a disruptive technology that will change the way engineers design their power converters and motor drives. THEMIS and ATLAS integrated circuits pave the way for a complete isolated gate driver technology from CISSOID, called HADES™, which will be launched in the coming months. The chipset is the solution of choice for new generation of power converters, motor drives and high power density modules. The preliminary datasheet is available from CISSOID and engineering samples in CSOIC28 package will be available in the first quarter of 2011. For more information, visit www.cissoid.com