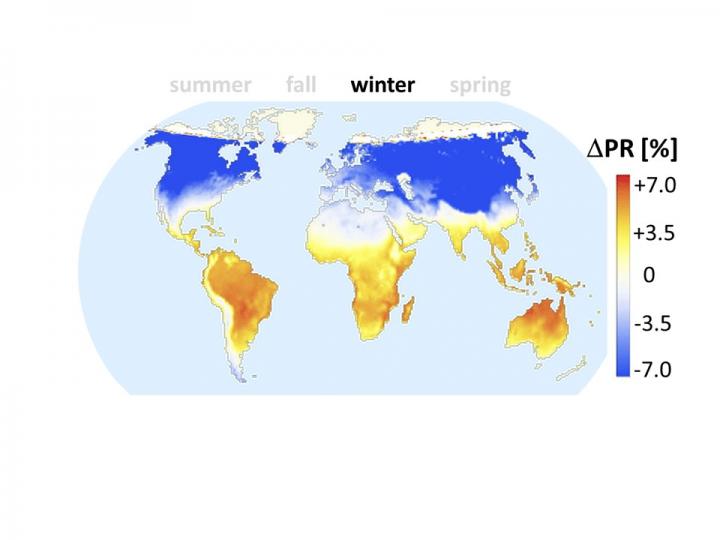 This shows how the difference in performance between the two solar cells vary over time.

Massachusetts Institute of Technology researchers can now predict how much energy solar cells will produce at any location worldwide. Surprisingly, they identified that two types of solar cells (silicon and cadmium telluride) can vary in energy output by 5% or more in tropical regions, where most of the emerging solar cell markets are located. This gap occurs because solar energy can shift depending on local temperature and water in the atmosphere. Their work, appearing December 13 in the journal Joule and developed into an open-source tool, emphasizes that solar products may behave differently depending on their environment.

"We've explored the convergence of two things, location and technology, to come up with a framework for predicting solar panel energy output," says senior author Tonio Buonassisi, an Associate Professor of Mechanical Engineering at MIT. "If you have a new solar technology, you can see where your technology might be able to outcompete commercial silicon solar cells."

To demonstrate how their framework works, the researchers combined real data from solar cells located in the United States (Perrysburg, Ohio) and Singapore with 1 year of satellite weather data to map where solar cells would work best outdoors. With this data, they analyzed two solar cell materials: silicon (commonly used in solar cells) and cadmium telluride (thin-film competitor material).

The researchers found that the cadmium telluride solar cells produced up to 5% more energy than silicon ones in the hot, humid Singaporean location. Similar trends can be expected for other materials with a higher electronic band gap like gallium arsenide or metal-halide perovskites.

"Tools used by developers to predict energy yields of solar panels and plan solar systems are often expensive and inaccurate," says first author Ian Marius Peters, a research associate at the MIT Photovoltaics Research Laboratory (@MITPVLab). "They're inaccurate because they were developed for temperate climates like the United States, Europe, and Japan."

Interested users will be able to download the online tool the researchers developed, and then plug in their own locations and performance information for different types of solar cells. This allows users to determine either where their solar cell would work best or what type of solar cell they should use in their location. This is a different way of thinking about solar cells, which are normally described in terms of how much energy they can produce in lab conditions, rather than in use in a specific environment.

"The takeaway is you should decide what type of solar cell you're using based on the type of climate in your area," says Peters. "There are reasons to use silicon, and there are reasons to use other technologies, like cadmium telluride. Outdoor conditions can become one of the most important factors for determining future research."