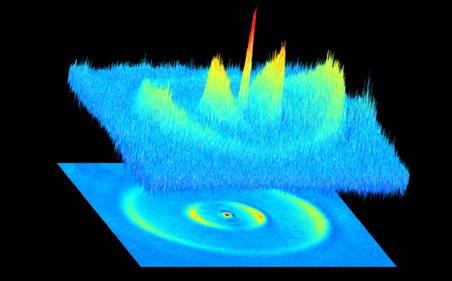 A computer image of the dissociation process of an ultracold molecule.

Leaders in the field of ultracold molecule research from Columbia and Harvard universities are teaming up to propel understanding of the quantum mechanics of chemical reactions.

The partnership will result in the development of new, more precise techniques that will expand the field of ultracold chemistry to a currently unattainable array of molecular species and reactions, enabling new generations of experiments in fundamental physics.

"We're very excited about this collaboration because we're combining two research directions that have been developing separately and can now be brought together to develop a new set of tools for both physicists and chemists," said Tanya Zelevinsky, an associate professor of Atomic, Molecular & Optical Physics and principal investigator of Columbia University's Z Lab.

Recent years have brought the advancement of quantum technologies, including laser cooling capabilities, which have allowed for the study of atoms at microkelvin, or near-zero, temperatures. In this state, scientists are able to manipulate and study the in?uence of quantum statistics, con?ning geometry, and magnetic ?elds -- nonclassical features that are inaccessible in room-temperature setups -- on an atom's behavior.

Experimentalists have known for years that ultrasensitive measurements made on ultracold atoms or molecules can reveal some of the now-hidden secrets of nature, such as whether the "constants of nature'' are actually constant or are changing with time.

Scientists have been successful in using laser cooling to study many types of atoms, however atoms of the most significant chemical interest to researchers, such as hydrogen, oxygen, and nitrogen, lack the properties required for direct cooling. Entirely new techniques are needed to explore the ultracold chemistry involving these species.

In an effort to overcome this challenge, researchers are starting to focus on creating ultracold molecules containing these target atoms. Developing and applying these techniques is the goal of a new project funded by the W. M. Keck Foundation.

Principal Investigator Zelevinsky and co-researcher John Doyle, at Harvard, have received a $1 million grant over the course of three years to take their work to the next level by developing an experimental facility that will open up the field of ultracold chemistry to a much wider array of atomic and molecular species and reactions.

To tackle the molecule cooling challenge, the researchers are approaching the problem from a novel angle. Zelevinsky explained that the attachment of certain metal atoms, such as calcium, allows for some molecules to be cooled by laser light.

The team's plan is to create a range of molecules with this metal attachment, apply laser light to cool the molecules to temperatures that have been unachievable to-date, and then to use additional laser light to slice off the metal atom in a process called photodissociation. This technique will allow for the manipulation of motion and chemical bonds of more complex molecules to create a variety of ultracold molecule species that are highly desirable, but so far inaccessible, to researchers, thereby pushing the field into new territory.

Potential for the project is immeasurable.

"There are so many things that these molecules will help us understand," Zelevinsky said, adding that studying chemical reactions involving polyatomic molecules at ultracold temperatures will open new avenues for testing current understanding of the fundamental symmetries and laws of nature, including things about our universe that scientists cannot yet explain, such as matter-antimatter imbalance, dark energy, and interstellar environments. The research will also provide molecules for table-top experiments that have traditionally required multi-billion-dollar accelerators to conduct.

"It's a really a big gain to be able to do that kind of physics without spending billions on an accelerator," she said. "Doing chemistry in the very fundamental regime has a sense of beauty that people can relate to. When quantum physics in atoms was first being worked out, no one could have imagined the many ways in which it would be used in our everyday lives today. Molecules - they can vibrate and rotate, and are richer than atoms. There will be many, many more applications that we cannot even imagine right now."