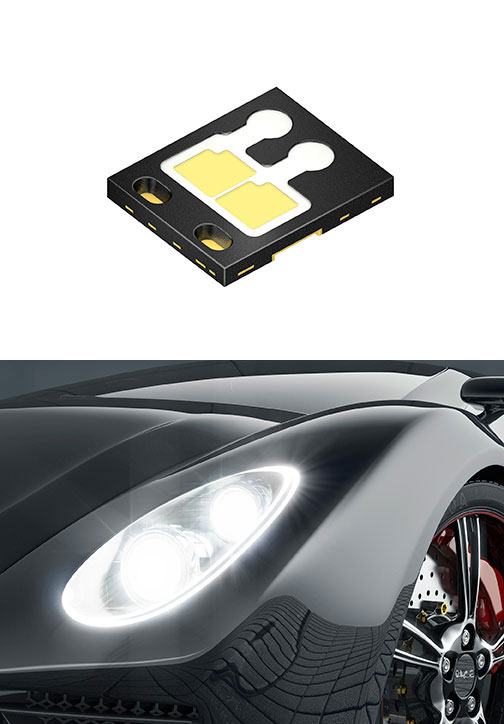 Osram Opto Semiconductors has introduced a new 2-chip version of the Oslon Black Flat LED. As with other LEDs from the Oslon Black Flat family, the new version features a high level of brightness and is suitable for all headlight functions. The major advantage of the new LED is that, as an SMT component, it can be attached directly to the PCB and then processed with other components as part of a standard soldering process. The simplicity of this implementation translates into significant cost and time savings during further processing. Thanks to UX:3 chip technology, the new Oslon Black Flat features a very high light output even with high currents, achieving over 500 lumens at 1 ampere. The high brightness level of the new LED is emitted from a very compact package with dimensions of 3.1 mm x 3.75 mm with a height of 0.5 mm. "With the new Oslon Black Flat, we're bringing into our portfolio a significantly slimmer LED than the previous version to enable even more compact headlight systems," explained Michael Martens, LED Product Marketing Manager at Osram Opto Semiconductors. The new 2-chip LED is suitable for all headlight functions such as low beams and high beams, fog lamps and is ideally suited for daytime running lights with light guides, where optical incoupling is key. Cost savings As a surface mountable component, the new Oslon Black Flat is, like other electronic components, simply attached to a circuit board and processed as part of standard soldering operations. "This soldering capability enables integration of the LED into a simple, standardized process and reduces the complexity of the processing steps, which saves a good deal of time and costs," said Martens. Good stability and homogeneous light distribution Further benefits of the Oslon Black Flat LEDs are their homogeneous distribution of light, very good contrast ratio and cyclic stability. The black QFN (Quad Flat No Leads) housing expands in a similar manner to the circuit board during high temperature cycle loads. As a result, soldered joints are considerably stronger and exposed to much less strain. A special sealing technology, together with the sophisticated package and a ceramic phosphor converter, enables a highly uniform distribution of light as well as good contrast conditions on roads. This is abetted by the chip encapsulation which allows you to achieve a defined bright/dark border in the light beam, as well as the high contrast of the luminous surface of both chips in relation to the package. Samples of the Oslon Black Flat are available now, and volume start-up is planned for the beginning of 2014. Osram