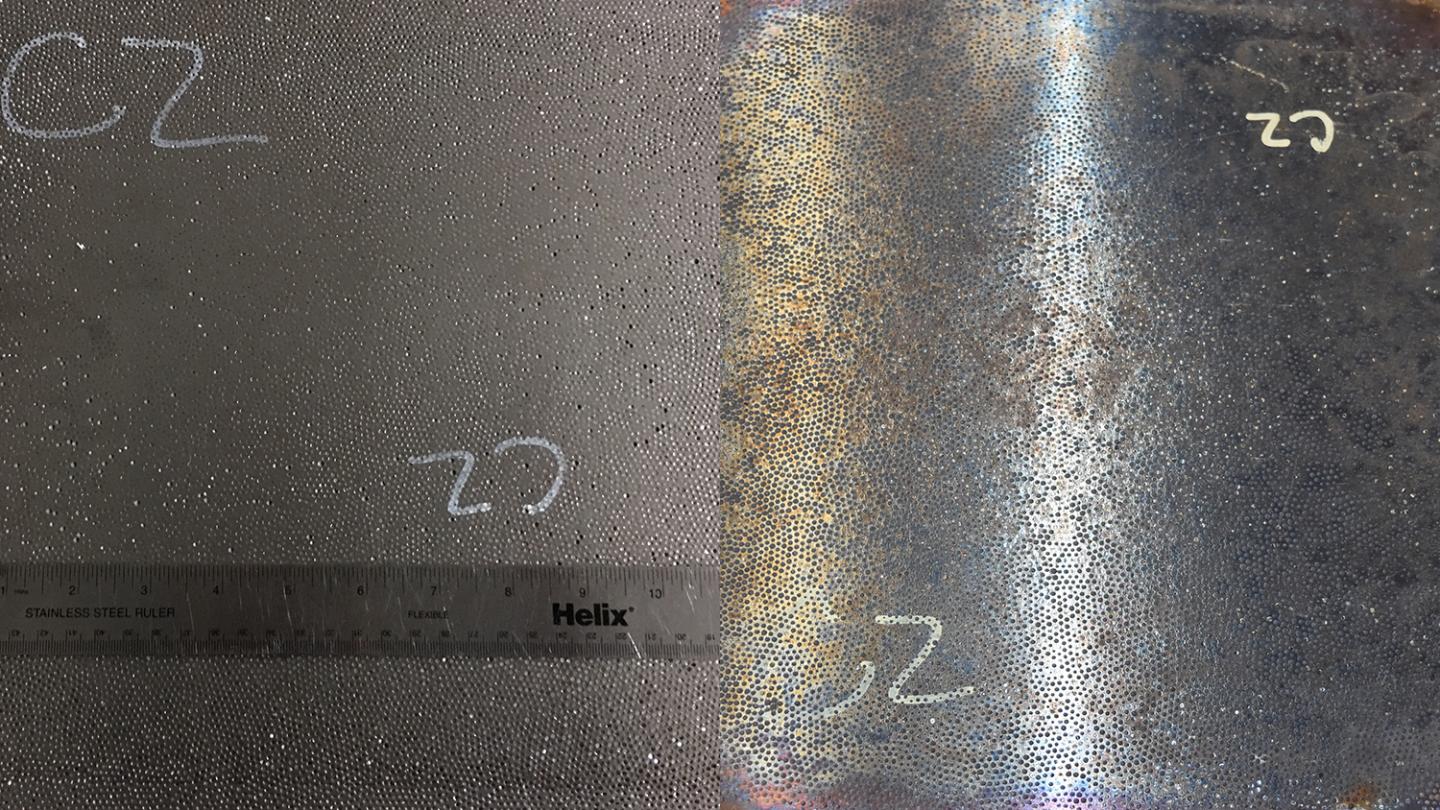 North Carolina State University researchers have demonstrated that composite metal foams (CMFs) can pass so-called "simulated pool fire testing" with flying colors, moving the material closer to use in applications such as packaging and transportation of hazardous materials. In addition, researchers used this experimental data to develop a model for predicting how variations in the CMF would affect its performance.

Simulated pool fire testing is not a computational simulation. It's an experimental test that materials must pass in order to be considered for use in manufacturing rail tank cars that transport hazardous materials. In simulated pool fire testing, a panel of material is exposed to a temperature of at least 816 degrees Celsius on one side for 100 minutes. A suite of thermal sensors rests on the other side of the panel. If those protected sensors register a temperature of 427 degrees Celsius or higher at any point during the 100 minutes, the material fails the test.

For their tests, the NC State researchers used panels made of steel-steel CMF. CMF is a foam that consists of hollow, metallic spheres - made of materials such as carbon steel, stainless steel or titanium - embedded in a metallic matrix made of steel, aluminum or other metallic alloys. "Steel-steel" CMF indicates that the spheres and the matrix were both made of steel.

"A solid steel plate with the same thickness hits 427 degrees Celsius in about 12 minutes," says Afsaneh Rabiei, first author of a paper on the work and a professor of mechanical and aerospace engineering at NC State. "In three rounds of testing, our steel-steel CMF was exposed to the same temperatures of 825 degrees Celsius for the full 100 minutes - and the highest temperatures recorded on the back of the panel using protected sensors were between 351 and 379 degrees Celsius. It is worth noting that the steel-steel CMF panel is only one-third of the weight of the solid steel plate that failed the test in about 12 minutes.

"In other words, the CMF passed the test by a wide margin," Rabiei says. "Based on the experimental and modeling results, as well as the uncertainty studies - all of which were reported in this paper - a 15.9 mm thick steel-steel CMF met the acceptance criteria for the simulated pool fire test by a large margin. We were testing the CMF for use as novel insulation system for transportation of HAZMAT, but it's also relevant to applications from military vehicles to architectural structures."

The new research builds on previous work that found CMFs are significantly more effective at insulating against high heat than the conventional metals and alloys that they're made of, such as steel. Taken together, the findings highlight CMF's potential for use in storing and transporting nuclear material, hazardous materials, explosives and other heat-sensitive materials, as well as space exploration.

But the new research also gave researchers a lot of data they could use to help fine-tune the desirable characteristics of CMFs, depending on the intended application.

"Because we can control the features of the CMF, such as the size of the hollow spheres in the foam, we wanted to create a model that could be used to predict how different types of CMF would perform in simulated pool fire testing," Rabiei says. "This would allow us to design future foams in order to find the best balance of physical, mechanical and thermal properties."

The researchers built the model by drawing on data from their simulated pool fire test experiments. And based on rigorous evaluations of the model, they found that the model's predictions are accurate to within 10 degrees Celsius.

"Our next steps include expanding the model to allow us to simulate so-called torch-fire testing," Rabiei says. "Torch-fire testing is also required for materials to be used in tank cars that transport hazardous materials, but it requires larger samples - panels that measure 4 feet by 4 feet."