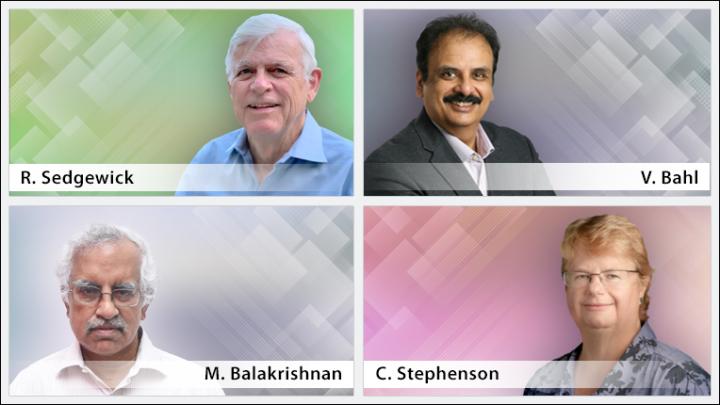 ACM, the Association for Computing Machinery, today recognized four individuals with awards for their exemplary service to the computing field. Working in diverse areas, the 2018 award recipients were selected by their peers for longstanding efforts that have significantly shaped the role of computing in society. This year's ACM award recipients made seminal contributions in textbooks and online education, education in the K-12 sphere, the mobile computing community, and technologies to aid the visually impaired. The recipients will be formally honored at the ACM Awards Banquet on June 15, 2019 in San Francisco.

Robert Sedgewick receives the Karl V. Karlstrom Outstanding Educator Award for developing classic textbooks and online materials for the study of algorithms, analytic combinatorics, and introductory computer science that have educated generations of students worldwide. Sedgewick, a professor at Princeton University, is best known for his series of Algorithms textbooks, which have been bestsellers for four decades (12 books in four editions covering five programming languages). The books develop a scientific approach to the study of algorithms, based on experiments with real code to validate hypotheses about performance based on mathematical analysis.

His recent book (with Kevin Wayne), Computer Science: An Interdisciplinary Approach, is a comprehensive introduction to the field and was named by ACM Computing Reviews as "Best of Computing Notable Book" for 2017. His book Analytic Combinatorics (with Philippe Flajolet) is an advanced graduate text that has been recognized with the 2019 Leroy P. Steele Prize for Mathematical Exposition.

More recently, Sedgewick has been extremely active as a pioneer and innovator in online education. He has co-developed extensive online content associated with his books that attract millions of visitors annually. Sedgewick has also recorded over 100 hours of online lectures on programming, computer science, and algorithms that reach hundreds of thousands of people around the world. The Sedgewick-Wayne Algorithms online course has been listed as one of the top 10 Massive Open Online Courses (MOOCs) of all time.

The Karl V. Karlstrom Outstanding Educator Award is presented annually to an outstanding educator who is appointed to a recognized educational baccalaureate institution. The recipient is recognized for advancing new teaching methodologies; effecting new curriculum development or expansion in Computer Science and Engineering; or making a significant contribution to the educational mission of ACM. Those with 10 years or less teaching experience are given special consideration. A prize of $10,000 is supplied by Pearson Education.

Victor Bahl receives the ACM Distinguished Service Award for significant and lasting service to the broad community of mobile computing and wireless networking, and for building strong linkages between academia, industry, and government agencies. His efforts have led to the creation of a prolific global community with a strong foundation that has created leaders and fostered and supported tens of thousands of researchers and engineers worldwide working in these areas. Bahl, a Distinguished Scientist at Microsoft Research, was a co-founder and the driving force behind ACM SIGMobile, ACM's Special Interest Group dedicated to all things mobile. He created MobiSys, the International Conference on Mobile Systems, Applications and Services, and for nearly two decades has steered MobiCom, the International Conference on Mobile Computing and Networking. Under Bahl's leadership, both of these conferences have grown to become highly respected international events and publication venues. Also in the vein of publishing and disseminating the best in mobile technology research, Bahl founded GetMobile, a quarterly scientific publication related to wireless communications and mobility, and served as its first editor.

He has been especially active in advancing the field by strengthening ties and fostering better understanding among academics, practitioners, and government officials. For example, he has positively influenced spectrum policies of the US Federal Communications Commission and that of several European, South American and Asian countries, through technology inventions, demonstrations, and technical evangelism involving academia-industry-government collaboration on opportunities around dynamic spectrum sharing, and he has initiated key efforts in mobile computing and wireless networking within the US National Science Foundation.

In the beginning of the last decade, when experimental wireless research was hampered by the lack of realistic hardware and software tools (especially in academia), Bahl led, through Microsoft Research, the creation and free distribution of the Mesh Academic Research Kit, a significant enabler for research in Wi-Fi systems, which has been adopted by more than 1,200 academic institutions worldwide. This toolkit allowed academic researchers to experiment with mesh technologies. He also drove the creation created of the complementary Microsoft Digital Inclusion program that disbursed more than $1.2 million in funding to academic institutions that applied wireless mesh and related technologies to bridge the digital divide in communities around the world. In the early days of cloud computing, Bahl created a research and training program, with tools and services, on cloud-powered mobile computing. Over 60 large universities offered senior and graduate-level courses based on this program.

Meenakshi Balakrishnan receives the ACM Eugene L. Lawler Award for Humanitarian Contributions within Computer Science and Informatics for research, development, and deployment of cost-effective embedded-system and software solutions addressing mobility and education challenges of the visually impaired in the developing world.

Balakrishnan, a professor at the Indian Institute of Technology, Delhi, has dedicated more than a decade to addressing the challenges of the visually impaired by developing low-cost, computing technology-based solutions. Each of his devices has been developed by the meticulous integration of hardware, software, and firmware. His applications have not only improved the quality of life for countless people, but also have made their day-to-day lives dramatically safer. These technologies are especially valuable in the developing world, where there are fewer resources for the visually impaired.

Perhaps his best-known technology is the SmartCane project, which allows the visually impaired to detect items above their knees within a distance of 3 meters. Balakrishnan equipped the probing cane with ultrasonic ranging, wherein the cane conveys the distance of obstacles using vibrations. Balakrishnan has also worked tirelessly to bring the SmartCane to market at an affordable cost. Working with for-profit, nonprofit, and government organizations, he introduced the SmartCane at 5% of the cost of a comparable product in the West. Within India he has made over 70,000 devices available through government initiatives and 45 partner agencies. SmartCane has also won numerous awards, including the Best Paper Award at the International Conference on Mobility and Transport for Elderly and Disabled Citizens (TRANSED) 2010.

Additional technologies Balakrishnan and his lab have developed include the OnBoard bus identification and homing system, which helps the visually impaired identify bus routes and locate the entry door, and The Refreshable Braille, which allows the visually impaired to read digital text line-by-line through a tactile interface. The ACM Eugene L. Lawler Award for Humanitarian Contributions within Computer Science and Informatics recognizes an individual or group who has made a significant contribution through the use of computing technology. It is given once every two years, assuming that there are worthy recipients. The award is accompanied by a prize of $5,000.

Chris Stephenson receives the Outstanding Contribution to ACM Award for advancing CS education by architecting and nurturing the Computer Science Teachers Association to incorporate more than 22,000 K-12 CS educators and partners into the ACM community.

Central to Stephenson's vision has been the idea that advancing computing as a professional field requires K-12 students to be introduced to computer science by educators with the tools, training, knowledge, and confidence both to teach the subject matter and to inspire students with their passion. She also has been guided by the ideas that K-12 teachers will be more effective in the classroom if actively engaged with other members of the professional computing community, and that K-12 computer science education is more effective when it is informed by academic research and industry expertise.

To realize her vision, Stephenson founded the Computer Science Teachers Association (CSTA) in 2004, with the support of ACM, and thereafter became its founding Executive Director. During her 10 years leading CSTA, she grew the organization to include 20,000 members around the world and 60 regional chapters.

Her scholarly research contributions were disseminated in several influential reports including: Bringing Computational Thinking to K-12: What Is Involved and What Is the Role of the Computer Science Education Community?; the inaugural CSTA K-12 Computer Science Standards; Running On Empty: The Failure to Teach K-12 Computer Science in the Digital Age; and Bugs in the System: Computer Science Teacher Certification in the U.S. These reports have led to projects, initiatives, and policy changes that have deeply and positively impacted K-12 education and educators globally.

Now Head of Computer Science Education Strategy at Google, Stephenson has continued her work with ACM education initiatives. She is currently co-chair of the ACM Education Board, where she has been actively engaged in developing curricular materials to meet the needs of computer science educators and students, both in the US and abroad. She also recently co-chaired the Board's retention in undergraduate computer science task force. The Outstanding Contribution to ACM Award recognizes outstanding service contributions to the Association. Candidates are selected based on the value and degree of service overall, and may be given to up to three individuals each year.