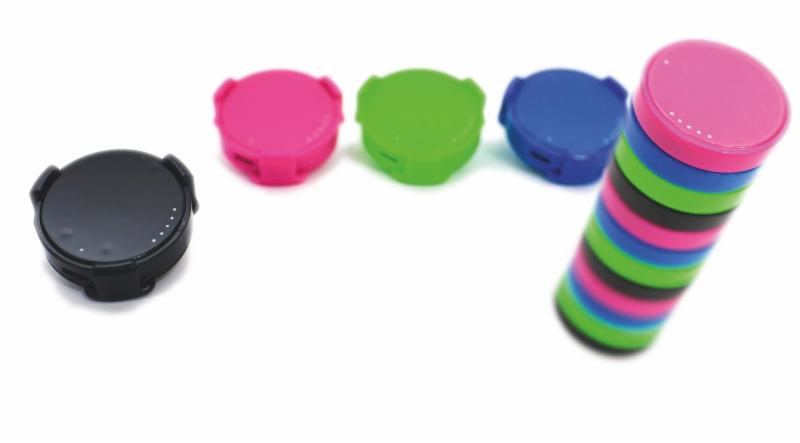 In a six-month randomized controlled trial of 448 subjects aged 11 to 14, Zamzee was proven to increase the weekly moderate-to-vigorous physical activity (MPVA) in children by 59 percent (equating to 45 additional minutes of MPVA per week) compared to a control group. Regular physical activity has been proven to be beneficial to health.

The study data also showed that Zamzee had a positive effect on other key biological factors associated with diseases linked to sedentary behavior, including reductions in LDL ('bad') cholesterol (a key risk factor for heart disease), and improved blood sugar control (a key factor in lowering the risk of developing type 2 diabetes.)

In operation, children carry or wear Zamzee (which is about the same size as a checkers game piece) during the day. Unlike many other activity monitors, Zamzee uses a tri-axial accelerometer to measure activity duration and intensity, rather than steps taken, which HopeLab says is more clinically meaningful.
This data automatically uploads to the Zamzee website from any iOS compatible Bluetooth Smart Ready smartphone, tablet, or computer, via the nRF8001's Bluetooth Smart wireless technology.

The nRF8001 is a highly integrated single-chip Bluetooth Smart Connectivity IC. It integrates a fully compliant Bluetooth v4.0 radio, Link Layer, and Host stack and features a simple serial interface that supports a wide range of external application microcontrollers. The ultra low power operating characteristics of the nRF8001 (peak currents as low as 12.5mA and average currents down to 9μA (for a 1s connection interval)) allow the Zamzee to operate under continuous daily use for up to two weeks without recharging.

The Zamzee website is modeled like a virtual gaming platform, allowing children, to decorate their avatar, monitor their physical activity, level up, take challenges, and share what they've been doing with the Zamzee user community. Zamzee says if a child works hard enough, within a year or two they can earn enough points to, for example, buy the latest Xbox computer game console.

"The serious health impacts of sedentary behavior are becoming a major problem in the developed world," says Lance Henderson, CEO of Zamzee. "In the U.S. alone there are approximately 20 million teens whose levels of activity are so low that we risk an entire generation becoming obese and as a result, developing diabetes, heart disease, and cancer."

"Key to the success of Zamzee is that it focuses on long-term behavior change by tapping into both intrinsic and extrinsic motivation," continues Dan Botwinick, VP of Marketing at Zamzee. "Extrinsic rewards are proven to be an effective tool to kick-start behavior change. We then try to cement that behavior change over time, by fostering a sense of purpose, connection, and control in the child. For example, we use a scoring algorithm that heavily rewards improvement, particularly steady improvement, and thus genuine positive behavior change."
Botwinick adds: "The bottom line is that kids get to see how their behavior and choices impact their activity levels. Increased physical activity produces not just physical benefits, but also psychological benefits in terms of improved confidence and self-esteem."

"The ubiquity of Bluetooth Smart wireless technology in modern smartphones, tablets, and computers makes it an enabling technology that produces major, life-enhancing advances in health and wellness at low cost and without unnecessary technological complexity," comments Geir Langeland, Nordic Semiconductor's Director of Sales & Marketing. "Zamzee is the kind of application that motivates Nordic staff to jump out of the bed in the mornings and come to work to make our Bluetooth Smart wireless connectivity products even better."

Pam Omidyar, wife of eBay founder Pierre Omidyar, founded HopeLab in 2001. Both Pam and Pierre are well-known philanthropists. Zamzee works closely with a large number of healthcare providers throughout the U.S. who increasingly refer (and pay for) those children that are most in need of physical activity to the Zamzee program.

Nordic Semiconductor pioneered the ultra low power wireless sector and was a key contributor to the Bluetooth low energy specification (a hallmark element of Bluetooth v4.0/4.1). The company's CTO is currently Chairman of the Board of the Bluetooth SIG.

A randomized, controlled study evaluated the effects of Zamzee, developed by HopeLab, on a diverse sample of 448 middleschool-aged adolescents enrolled from urban, suburban and rural environments across the U.S. Half of the study participants used Zamzee, an activity meter that measures movement using a three-axis accelerometer and uploads physical activity data to a motivational game-based website. The website allows the participants to view their activity levels, earn points for movement, achieve goals, and select rewards. The other half of the study's participants (the control group) received a Zamzee activity meter that uploaded physical activity data but had no access to the motivational website.

In the study, kids using the Zamzee activity meter and website showed an average increase in moderate-to-vigorous physical activity (MVPA) of 59 percent - or approximately 45 additional minutes of MVPA per week - compared to the control group. This impact persisted throughout the six-month study period. Significant increases in physical activity were seen across a number of key groups at risk of health problems due to sedentary behavior, including a 27 percent increase in MVPA among overweight participants (with a body mass index (BMI) greater than 25) and a 103 percent increase in MVPA among girls.

Sedentary behavior is a major problem of national importance in the U.S. There are approximately 20 million 'tweens' and young teenagers in the U.S., and research shows that sedentary behavior is putting this generation at risk of serious and costly long-term health problems, including obesity, diabetes, heart disease, and cancer.