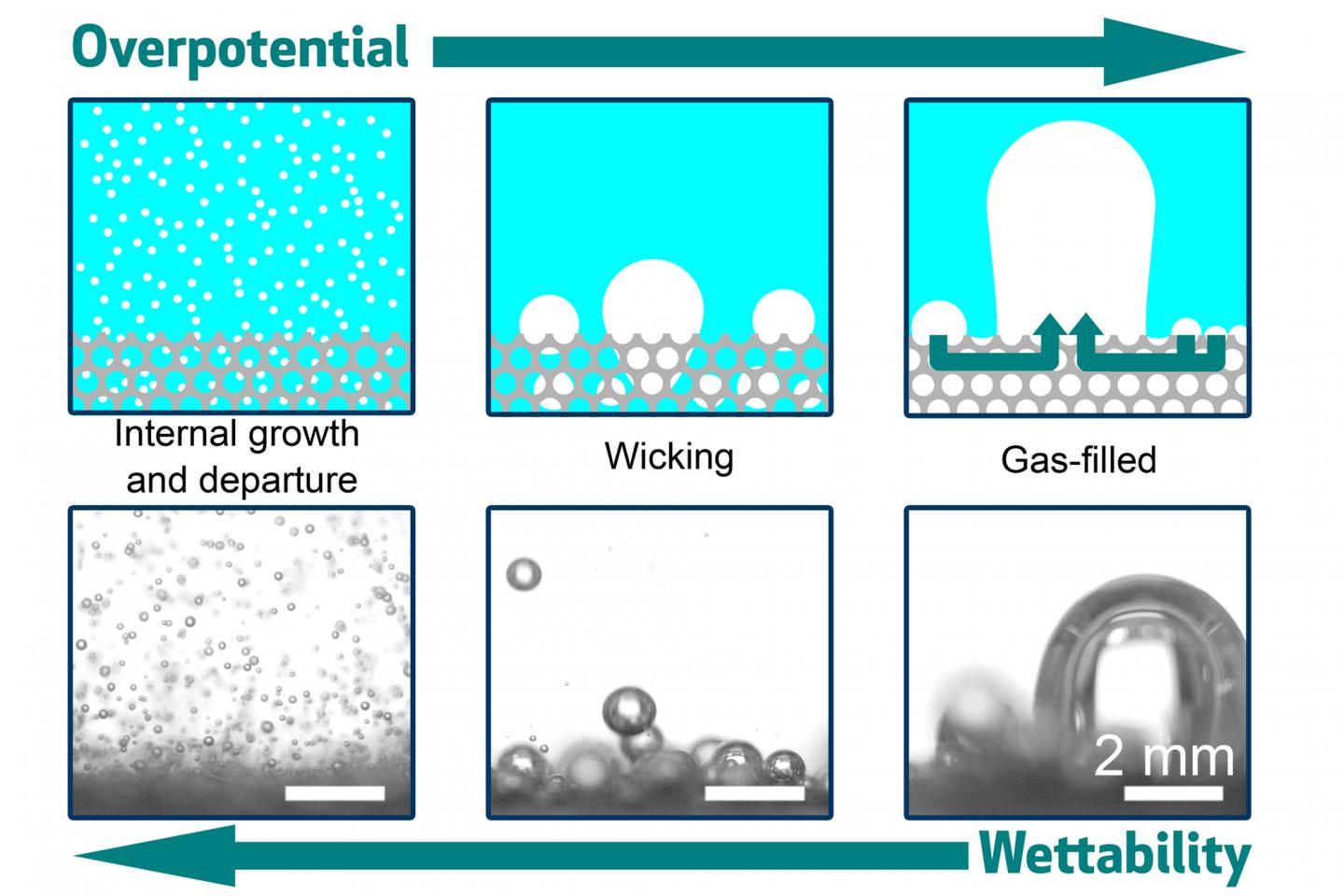 This image shows the interplay among electrode wettability, porous structure, and overpotential. With the decrease of wettability (moving left to right), the gas-evolving electrode transitions from an internal growth and departure mode to a gas-filled mode, associated with a drastic change of bubble behaviors and significant increase of overpotential.

Using electricity to split water into hydrogen and oxygen can be an effective way to produce clean-burning hydrogen fuel, with further benefits if that electricity is generated from renewable energy sources. But as water-splitting technologies improve, often using porous electrode materials to provide greater surface areas for electrochemical reactions, their efficiency is often limited by the formation of bubbles that can block or clog the reactive surfaces.

Now, a study at MIT has for the first time analyzed and quantified how bubbles form on these porous electrodes. The researchers have found that there are three different ways bubbles can form on and depart from the surface, and that these can be precisely controlled by adjusting the composition and surface treatment of the electrodes.

The findings could apply to a variety of other electrochemical reactions as well, including those used for the conversion of carbon dioxide captured from power plant emissions or air to form fuel or chemical feedstocks. The work is described today in the journal Joule, in a paper by MIT visiting scholar Ryuichi Iwata, graduate student Lenan Zhang, professors Evelyn Wang and Betar Gallant, and three others.

"Water-splitting is basically a way to generate hydrogen out of electricity, and it can be used for mitigating the fluctuations of the energy supply from renewable sources," says Iwata, the paper's lead author. That application was what motivated the team to study the limitations on that process and how they could be controlled.

Because the reaction constantly produces gas within a liquid medium, the gas forms bubbles that can temporarily block the active electrode surface. "Control of the bubbles is a key to realizing a high system performance," Iwata says. But little study had been done on the kinds of porous electrodes that are increasingly being studied for use in such systems.

The team identified three different ways that bubbles can form and release from the surface. In one, dubbed internal growth and departure, the bubbles are tiny relative to the size of the pores in the electrode. In that case, bubbles float away freely and the surface remains relatively clear, promoting the reaction process.

In another regime, the bubbles are larger than the pores, so they tend to get stuck and clog the openings, significantly curtailing the reaction. And in a third, intermediate regime, called wicking, the bubbles are of medium size and are still partly blocked, but manage to seep out through capillary action.

The team found that the crucial variable in determining which of these regimes takes place is the wettability of the porous surface. This quality, which determines whether water spreads out evenly across the surface or beads up into droplets, can be controlled by adjusting the coating applied to the surface. The team used a polymer called PTFE, and the more of it they sputtered onto the electrode surface, the more hydrophobic it became. It also became more resistant to blockage by larger bubbles.

The transition is quite abrupt, Zhang says, so even a small change in wettability, brought about by a small change in the surface coating's coverage, can dramatically alter the system's performance. Through this finding, he says, "we've added a new design parameter, which is the ratio of the bubble departure diameter [the size it reaches before separating from the surface] and the pore size. This is a new indicator for the effectiveness of a porous electrode."

Pore size can be controlled through the way the porous electrodes are made, and the wettability can be controlled precisely through the added coating. So, "by manipulating these two effects, in the future we can precisely control these design parameters to ensure that the porous medium is operated under the optimal conditions," Zhang says. This will provide materials designers with a set of parameters to help guide their selection of chemical compounds, manufacturing methods and surface treatments or coatings in order to provide the best performance for a specific application.

While the group's experiments focused on the water-splitting process, the results should be applicable to virtually any gas-evolving electrochemical reaction, the team says, including reactions used to electrochemically convert captured carbon dioxide, for example from power plant emissions.

Gallant, an associate professor of mechanical engineering at MIT, says that "what's really exciting is that as the technology of water splitting continues to develop, the field's focus is expanding beyond designing catalyst materials to engineering mass transport, to the point where this technology is poised to be able to scale." While it's still not at the mass-market commercializable stage, she says, "they're getting there. And now that we're starting to really push the limits of gas evolution rates with good catalysts, we can't ignore the bubbles that are being evolved anymore, which is a good sign."