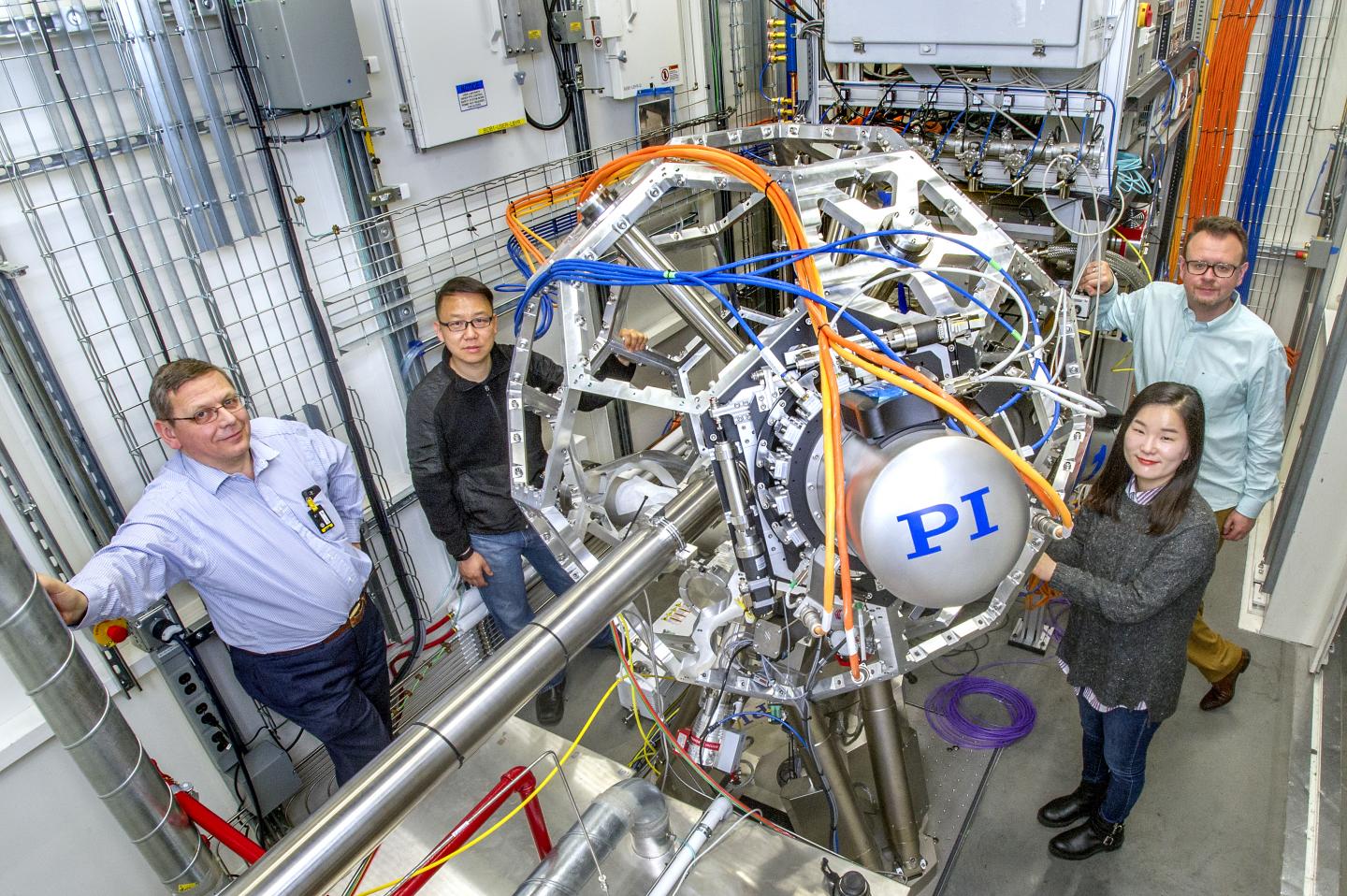 Brookhaven scientists are pictured at NSLS-II beamline 8-ID, where they used ultra-bright x-ray light to 'see' the chemical complexity of a new catalytic material. Pictured from left to right are Klaus Attenkofer, Dong Su, Sooyeon Hwang, and Eli Stavitski.

UPTON, NY - Imagine if carbon dioxide (CO2) could easily be converted into usable energy. Every time you breathe or drive a motor vehicle, you would produce a key ingredient for generating fuels. Like photosynthesis in plants, we could turn CO2 into molecules that are essential for day-to-day life. Now, scientists are one step closer.

Researchers at the U.S. Department of Energy's (DOE) Brookhaven National Laboratory are part of a scientific collaboration that has identified a new electrocatalyst that efficiently converts CO2 to carbon monoxide (CO), a highly energetic molecule. Their findings were published on Feb. 1 in Energy & Environmental Science.

"There are many ways to use CO," said Eli Stavitski, a scientist at Brookhaven and an author on the paper. "You can react it with water to produce energy-rich hydrogen gas, or with hydrogen to produce useful chemicals, such as hydrocarbons or alcohols. If there were a sustainable, cost-efficient route to transform CO2 to CO, it would benefit society greatly."

Scientists have long sought a way to convert CO2 to CO, but traditional electrocatalysts cannot effectively initiate the reaction. That's because a competing reaction, called the hydrogen evolution reaction (HER) or "water splitting," takes precedence over the CO2 conversion reaction.

A few noble metals, such as gold and platinum, can avoid HER and convert CO2 to CO; however, these metals are relatively rare and too expensive to serve as cost-efficient catalysts. So, to convert CO2 to CO in a cost-effective way, scientists used an entirely new form of catalyst. Instead of noble metal nanoparticles, they used single atoms of nickel.

"Nickel metal, in bulk, has rarely been selected as a promising candidate for converting CO2 to CO," said Haotian Wang, a Rowland Fellow at Harvard University and the corresponding author on the paper. "One reason is that it performs HER very well, and brings down the CO2 reduction selectivity dramatically. Another reason is because its surface can be easily poisoned by CO molecules if any are produced."

Single atoms of nickel, however, produce a different result.

"Single atoms prefer to produce CO, rather than performing the competing HER, because the surface of a bulk metal is very different from individual atoms," Stavitski said.

Klaus Attenkofer, also a Brookhaven scientist and a co-author on the paper, added, "The surface of a metal has one energy potential--it is uniform. Whereas on a single atom, every place on the surface has a different kind of energy."

In addition to the unique energetic properties of single atoms, the CO2 conversation reaction was facilitated by the interaction of the nickel atoms with a surrounding sheet of graphene. Anchoring the atoms to graphene enabled the scientists to tune the catalyst and suppress HER.

To get a closer look at the individual nickel atoms within the atomically thin graphene sheet, the scientists used scanning transmission electron microscopy (STEM) at Brookhaven's Center for Functional Nanomaterials (CFN), a DOE Office of Science User Facility. By scanning an electron probe over the sample, the scientists were able to visualize discrete nickel atoms on the graphene.

"Our state-of-art transmission electron microscope is a unique tool to see extremely tiny features, such as single atoms," said Sooyeon Hwang, a scientist at CFN and a co-author on the paper.

"Single atoms are usually unstable and tend to aggregate on the support," added Dong Su, also a CFN scientist and a co-author on the paper. "However, we found the individual nickel atoms were distributed uniformly, which accounted for the excellent performance of the conversion reaction."

To analyze the chemical complexity of the material, the scientists used beamline 8-ID at the National Synchrotron Light Source II (NSLS-II)--also a DOE Office of Science User Facility at Brookhaven Lab. The ultra-bright x-ray light at NSLS-II enabled the scientists to "see" a detailed view of the material's inner structure.

Based on the results from the studies at Harvard, NSLS-II, CFN, and additional institutions, the scientists discovered single nickel atoms catalyzed the CO2 conversion reaction with a maximal of 97 percent efficiency. The scientists say this is a major step toward recycling CO2 for usable energy and chemicals.

"To apply this technology to real applications in the future, we are currently aimed at producing this single atom catalyst in a cheap and large-scale way, while improving its performance and maintaining its efficiency," said Wang.