Cooking up a new Theory for Better Accelerators 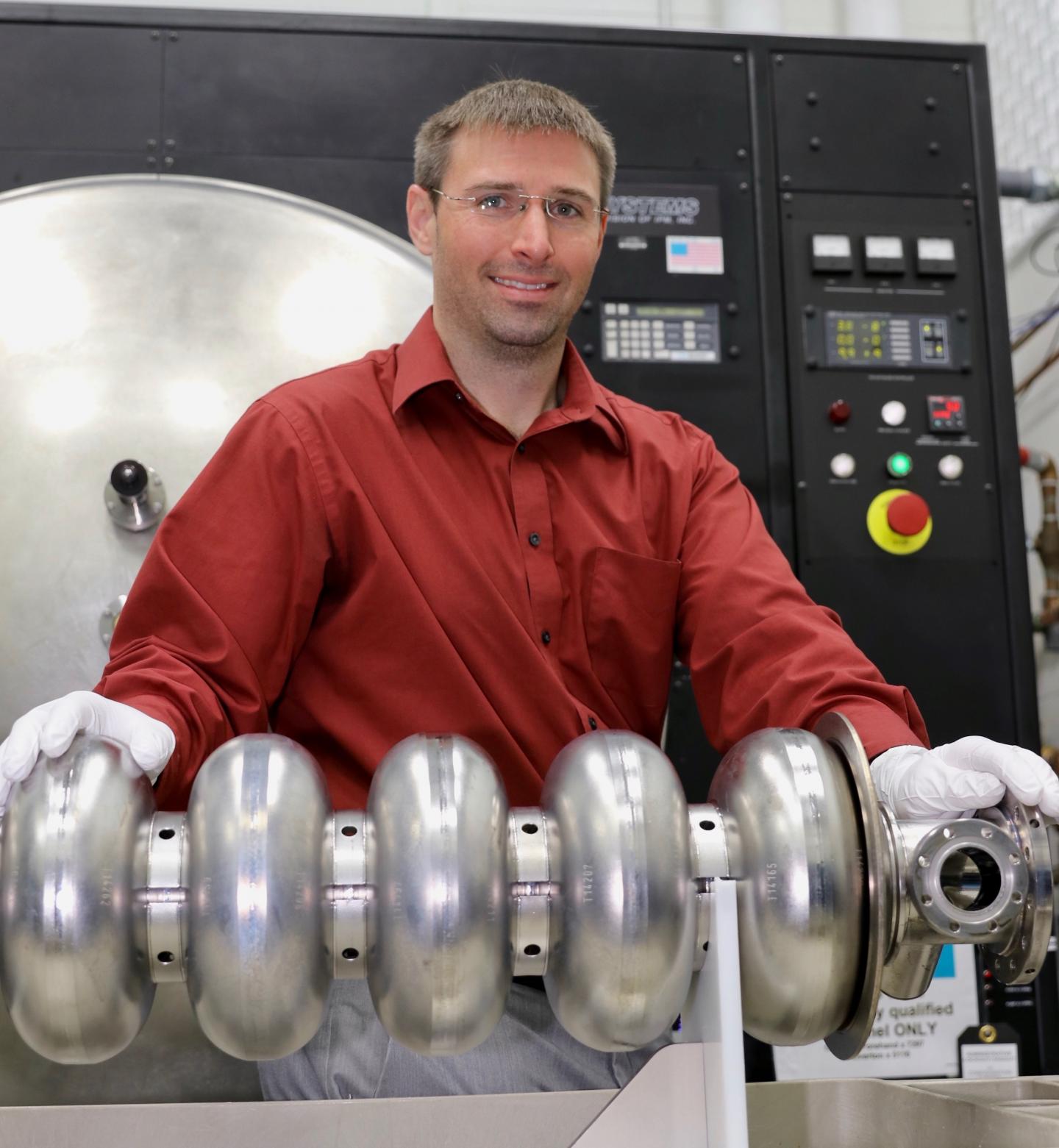 Particle accelerators are go-to machines for researchers who want to understand the tiniest bits of matter or analyze the X-ray structure of complex molecules, for companies looking to sanitize medical devices and for scanning cargo at our nation's borders. Increasing the efficiency of the components that power these machines could benefit a wide range of scientific and industrial applications.

When it comes to building better components for superconducting radiofrequency, or SRF, accelerators, such as Jefferson Lab's own CEBAF, traditional wisdom has held that the most efficient components are made of the purest niobium metal. That wisdom was turned on its head in 2012, when two Jefferson Lab staff scientists unintentionally implanted atoms of titanium into the walls of niobium accelerator components with surprising results.

"Niobium, of course, is what we make our particle accelerators out of," Palczewski explained. "Gianluigi Ciovati and Pashupati Dhakal discovered titanium doping when they accidentally implanted titanium in a specific way into the niobium, which made the niobium component much more efficient at accelerating particles."

A short time later, scientists at Fermilab made a similar serendipitous discovery, but this time adding atoms of nitrogen to the niobium metal. The marked improvement in performance was so impressive that it created quite a buzz in the SRF community, and Palczewski and his colleagues at Jefferson Lab and Fermilab began refining the nitrogen doping process. The know-how was transferred to industry, enabling it to be used in the production of components for the LCLS-II project, an upgrade of the Linac Coherent Light Source at DOE's SLAC National Accelerator Lab that is currently underway.

Still, the best method for doping the niobium for optimum performance remains a mystery, and finding the right recipe has been more a game of educated guessing

"We call these recipes, because we do something and then we check the results. We're not predictive about it," Palczewski said. "My grant is actually to build a full mathematical model of what is happening in doping."

To do that, Palczewski will spend the next few years developing baseline results for two different successful recipes that are being used to dope niobium with nitrogen. These recipes vary the time that niobium is exposed to nitrogen gas and how long the niobium is then heated in a furnace to diffuse the molecules of nitrogen into the surface of the niobium.

Palczewski will use the current recipes and incremental variations of them to produce new samples that will be performance tested, so that he can develop a theoretical model of how the expected performance changes based on the different factors in the recipes.

"The goal is to build a full model of everything that's happening in the furnace, as well as the chemistry afterwards, and how it modifies the superconducting properties. We'll turn a bunch of recipes out, then plot those performance points, and then develop a mathematical model to fit what we see," he explained. "And then the next stage of it is to go to a new place, where no one's ever done this before. We'll come up with a recipe, input it into the mathematical model and then see how predictive the new model is compared to reality."

In these early stages, Palczewski plans to keep the research relatively simple. With the help of a graduate student and a postdoctoral research scientist funded by the research grant, he'll use one source for the niobium metal and change just a few parameters in cavity preparation. But eventually, he'd like to make the model more robust by including other factors, such as different sources of niobium, different component manufacturers and additional preparation tweaks.

"In the end, I'm an experimentalist who wants to be a theoretical physicist. So, I'm meeting in the middle by building a unique data set that nobody else has, and then developing a fitted model built upon experimental data," he said. "Because the field needs to move past making recipes and towards real scientific development using this technology."

Palczewski is one of 73 scientists nationwide who was selected this year to receive a DOE Early Career Research Program grant. The effort, now in its tenth year, is designed to bolster the nation's scientific workforce by providing support to exceptional researchers during the crucial early career years, when many scientists do their most formative work. He will receive about $500,000 per year for five years to cover salaries and research expenses.