Coupled Exploration of Light and Matter 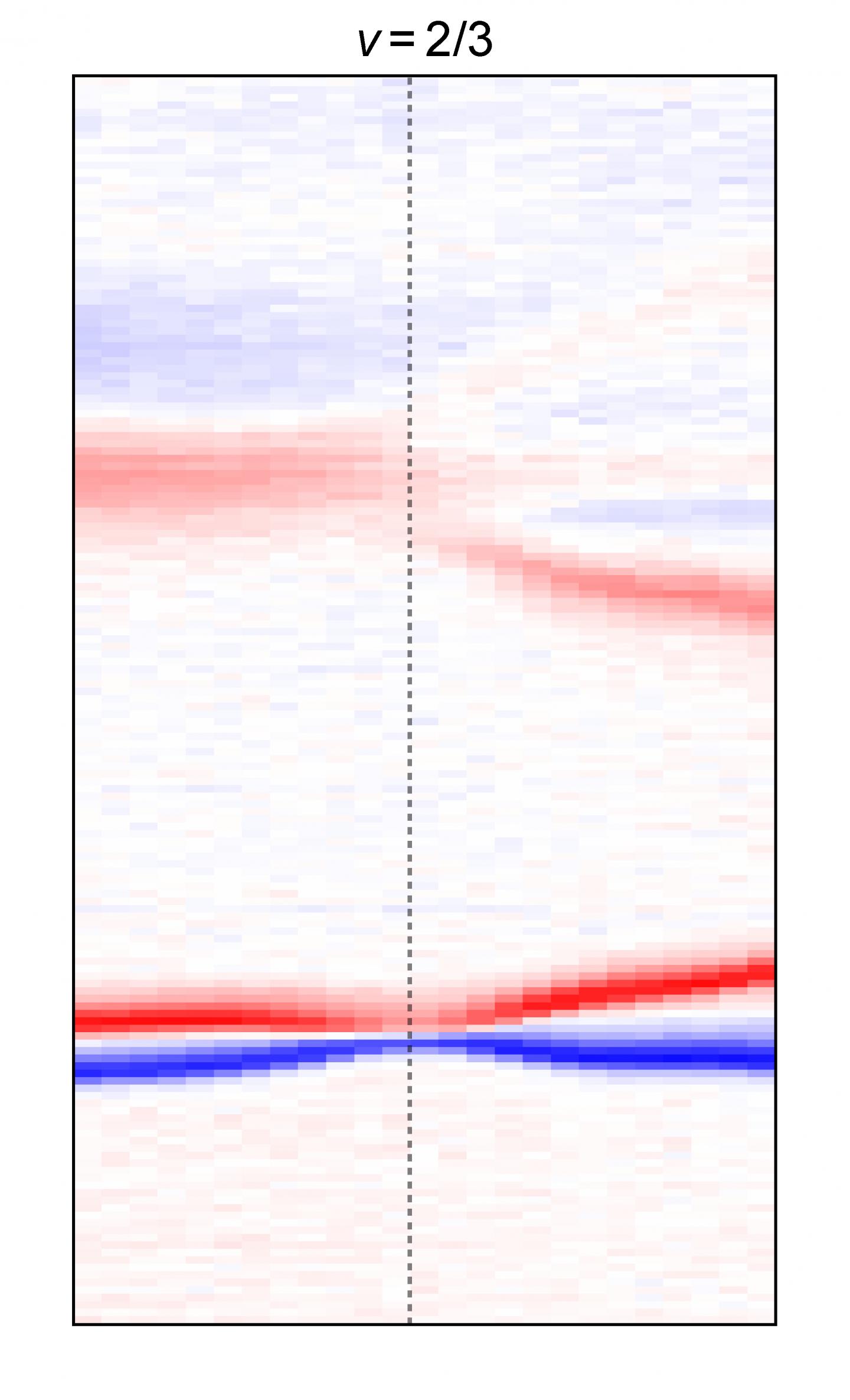 White-light reflectivity spectra recorded around a filling factor of 2/3, revealing clear signatures of optical coupling to the quantum Hall state.

The concept of 'quasiparticles' is a highly successful framework for the description of complex phenomena that emerge in many-body systems. One species of quasiparticles that in particular has attracted interest in recent years are polaritons in semiconductor materials. These are created by shining light onto a semiconductor, where the photons excite electronic polarization waves, called excitons. The creation process is followed by a period during which the dynamics of the system can be described as that of a particle-like entity that is neither light nor matter, but a superposition of the two. Only once those mixed light-matter quasiparticles decay -- typically on the timescale of picoseconds -- do the photons gain back their individual identity. Writing in the journal Nature, Patrick Knüppel and colleagues from the group of Professor Ataç Imamoglu in the Department of Physics at ETH Zurich now describe experiments in which the released photons reveal unique information about the semiconductor they have just left; at the same time the photons have been modified in ways that would not have been possible without interacting with the semiconductor material.

Much of the recent interest in polaritons comes from the prospect that they open up intriguing new capabilities in photonics. Specifically, polaritons provide a means to let photons do something that photons cannot do on their own: interact with one another. Rays of light normally simply pass through each other. By contrast, photons that are bound in polaritons can interact through the matter part of the latter. Once that interaction can be made sufficiently strong, the properties of photons can be harnessed in new ways, for example for quantum information processing or in novel optical quantum materials. However, achieving interactions strong enough for such applications is no mean feat.

It starts with creating polaritons in the first place. The semiconductor material hosting the electronic system has to be placed in an optical cavity, to facilitate strong coupling between matter and light. Creating such structures is something Imamoglu's group has perfected over the years, in collaboration with others, in particular with the group of Professor Werner Wegscheider, also at the Department of Physics of ETH Zurich. A separate challenge is to make the interaction between polaritons strong enough that they have a sizeable effect during the short lifetime of the quasiparticles. How to achieve such strong polariton-polariton interaction is currently a major open problem in the field, hindering progress towards practical applications. And here Knüppel et al. have now made a substantial contribution with their latest work.

The ETH physicists have found an unexpected way to enhance the interaction between polaritons, namely by suitably preparing the electrons with which the photons are about to interact. Specifically, they started with the electrons being initially in the so-called fractional quantum Hall regime, where electrons are confined to two dimensions and exposed to a high magnetic field, to form highly correlated states entirely driven by electron-electron interactions. For particular values of the applied magnetic field -- which determines the so-called filling factor characterising the quantum Hall state -- they observed that photons shone onto and reflected from the sample showed clear signatures of optical coupling to quantum Hall states (see the figure).

Importantly, the dependence of the optical signal on the filling factor of the electron system also appeared in the nonlinear part of the signal, a strong indicator that the polaritons have interacted with one another. In the fractional quantum Hall regime, the polariton-polariton interactions were up to a factor of ten stronger than in experiments with the electrons outside that regime. That enhancement by one order of magnitude is a significant advance relative to current capabilities, and might be enough to enable key demonstrations of 'polaritonics' (such as strong polariton blockade). This not least as in the experiments of Knüppel et al. the increase in interactions does not come at the expense of the polariton lifetime, in contrast to many previous attempts.

The power, and challenges, of nonlinear optics

Beyond the implications for manipulating light, these experiments also take the optical characterisation of many-body states of two-dimensional electron systems to a new level. They establish how to separate the weak nonlinear contribution to the signal from the dominant linear one. This has been made possible through a new type of experiment that the ETH researchers have developed. A major challenge was to deal with the requirement of having to illuminate the sample with relatively high-power light, to tweak out the weak nonlinear signal. To ensure that the photons impinging on the semiconductor do not cause unwanted modifications to the electron system -- in particular, ionization of trapped charges -- the Imamoglu-Wegscheider team designed a sample structure that has reduced sensitivity to light, and they performed experiments with pulsed rather than continuous excitation, to minimize exposure to light.

The toolset now developed to measure the nonlinear optical response of quantum Hall states should enable novel insight beyond what is possible with linear optical measurements or in the traditionally used transport experiments. This is welcome news for those studying the interplay between photonic excitations and two-dimensional electron systems -- a field in which there is no lack of open scientific problems.