Tandem perovskite-CIGS solar cells have reached an efficiency of 23.26%, which currently is a world record value in this type of cells 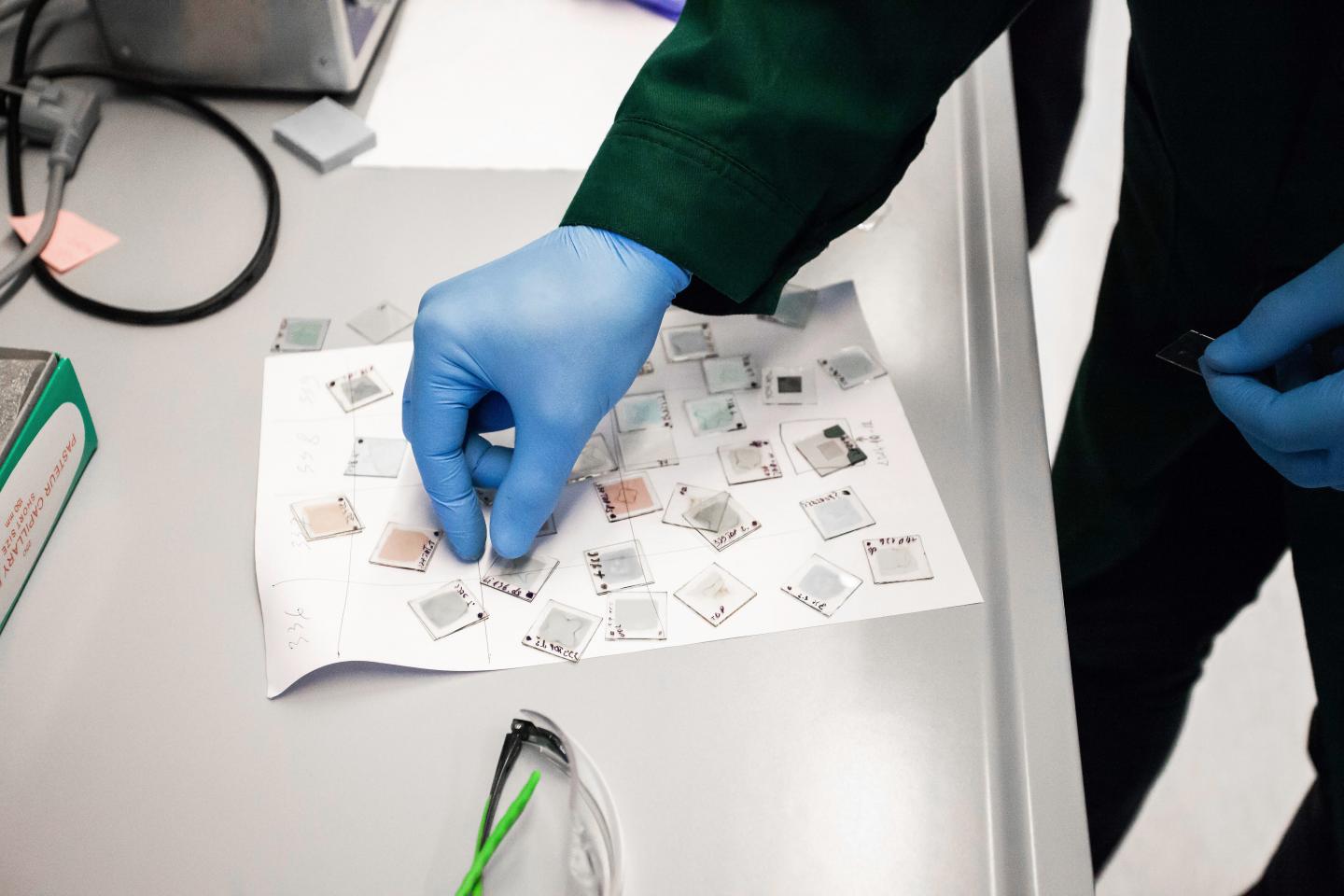 The innovative method allows forming the electrode layer as thin as 1-2 nm, evenly covering even rough surfaces of tandem architectures.

Tandem perovskite-CIGS solar cells, produced as a result of the collaboration between Lithuanian and German researchers, have reached an efficiency of 23.26 per cent, which currently is a world record value in this type of cells. One reason for the success lies in the cell's intermediate layer of organic molecules: they self-assemble to cover even rough semiconductor surfaces. The self-assembling materials were synthesised at Kaunas University of Technology (KTU), Lithuania.

Tandem solar cells of various configurations today are on the agenda of many research teams around the world. The technology is interesting and promising, as it seeks to overcome the limits for single-cell efficiency. Moreover, in the production of a thin-film tandem solar cells, flexible substrates can be used, which allows interesting solutions for contemporary technology and design applications.

The tandem solar cell designed by the team of physicists at Helmholtz Zentrum Berlin (HZB), Germany combines perovskite and copper-indium-gallium-selenide (CIGS). The contact layers between these two semiconductors consist of carbazole-based organic molecules, functionalized with phosphonic acid groups, which arrange themselves into what are known as self-assembled monolayers (SAMs).

The materials used for SAMs were developed by the team of researchers at Kaunas University of Technology (KTU), Lithuania. KTU chemists have synthesised molecules assembling themselves into monolayers, which can evenly cover any surface - including rough surfaces of the CIGS solar cells.

"Usually the problem with fabrication of the perovskite-CIGS tandems is the rough surface of the bottom cell, which is difficult to cover evenly by conventional solution-based processes. Our method allows forming the electrode layer as thin as 1-2 nm, covering all the surface. It is a cost-efficient and effective process - the molecules are deposited on the surface from diluted solutions and the molecule-thick selective layer is formed", explains Artiom Magomedov, PhD student at KTU, one of the authors of the invention.

The used materials are strikingly simple and robust, which also allows them to be scaled up to industrial levels.

The team of KTU chemists has been studying the use of the self-assembling molecules to form the electrode layer for a couple of years. The material, synthesised at KTU, was applied in the production of a functioning solar cell with just a monolayer-thick selective contact by HZB physicists. They could produce a monolithic tandem solar cell from perovskite and CIGS that achieved an officially certified efficiency of 23.26 per cent, which currently is a world record value. The tandem cell has an active area of one square centimetre and thus reaches another milestone, as perovskite CIGS tandem cells have so far been significantly smaller.

"Thin-film tandem solar cells are the future of solar energy, as they are cheaper and potentially much more efficient. The limits of efficiency of currently commercially used silicon-based solar elements are saturating. Moreover, the silicon resources are becoming scarce and it is increasingly more expensive to extract the element", says Professor Vytautas Getautis, the head of the KTU research group behind the invention.

A new world-record tandem solar cell was presented at EU PVSEC, the world's largest international photovoltaic and solar energy conference and exhibition, in Marseille, France on September 11, 2019, by Prof Steve Albrecht from the HZB. Two patents have been filed for the layers of the cells.