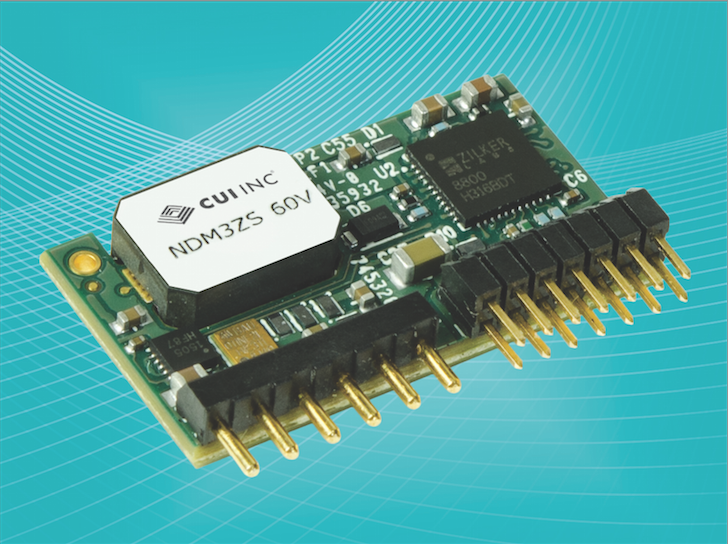 CUI announced their latest family of digital point of load dc-dc modules, setting performance benchmarks in efficiency, power density, and transient response to address the rapidly-rising power challenges in distributed power architectures. The NDM3ZS-60 is a non-isolated module outputting 60A in ultra low-profile vertical and horizontal packages. The series is the first non-isolated design to incorporate CUI’s patented Solus® Power Topology which integrates a conventional buck converter into a SEPIC converter to form a SEPIC-fed buck converter; a single stage topology with one magnetic element, one control switch and two commutation switches that are optimally controlled by pulse-width modulation (PWM).

The new topology allows the NDM3ZS-60 to hit the performance metrics quickly which is imperative in today’s advanced designs. Efficiency peaks at 91.3% at 12Vdc in to 1.0Vdc out, 50% load. Efficiency remains high up to full load at 88.5%. Transient response is also greatly improved with the SEPIC-fed buck. At 12Vdc in to 1Vdc out with a 30A load step (from 15A to 45A) and a 10A/μs slew rate, peak voltage is a mere 16mV with typical external capacitance required.

The NDM3ZS-60 is also the first released module to use Intersil’s newest digital power controller, the ZL8800, incorporating a range of advanced digital features. The ZL8800’s ChargeModeTM Control technology further enhances the module’s transient response performance by responding to a transient load step in a single switching cycle. With zero compensation required, the modules autonomously balance the trade-offs between dynamic performance and system stability on a continuous basis. With this feature, designers are able to bypass the traditional practice of building-in margins to account for factors such as component ageing, manufacturing variations, and temperature, which inevitably lead to higher component cost and longer design cycles. The NDM3ZS’s zero compensation feature allows the module to dynamically set optimum stability in real time as conditions change.

The NDM3ZS-60 series is available with an input range of 7.2~14Vdc and a programmable output range of 0.6~1.5Vdc. Additional features include voltage sequencing, voltage tracking, synchronization and phase spreading, programmable soft start and stop, as well as a host of monitoring capabilities. All features are dynamically programmable via PMBus commands or through CUI’s simple, easy to use Novum ACETM GUI.
The family is available in three compact configurations, a through-hole vertical version measuring 33.02 (L) X 8.92 (W) X 18.11 (H) mm and a horizontal version measuring 33.02 x 18.11 x 7.44 mm that is offered in surface mount or through-hole configurations.

For added flexibility during the development process, the modules are footprint nested to accommodate dual layout needs in the event that design requirements change. Additionally, the NDMZ3S-60 is footprint compatible with 40A and 50A digital modules currently available from CUI and other manufacturers, providing up to a 50% increase in power density over existing solutions.

“We are very excited to announce the release of our first non-isolated POL module based on the Solus Power Topology,” said Mark Adams, CUI’s Senior Vice President. "Our networking customers have hit a ceiling with existing POL topologies as the challenges of powering today’s advanced ICs have increased. Our NDM3ZS-60 addresses these efficiency, power density, and transient challenges head-on." Engineering samples are available immediately for select customers.