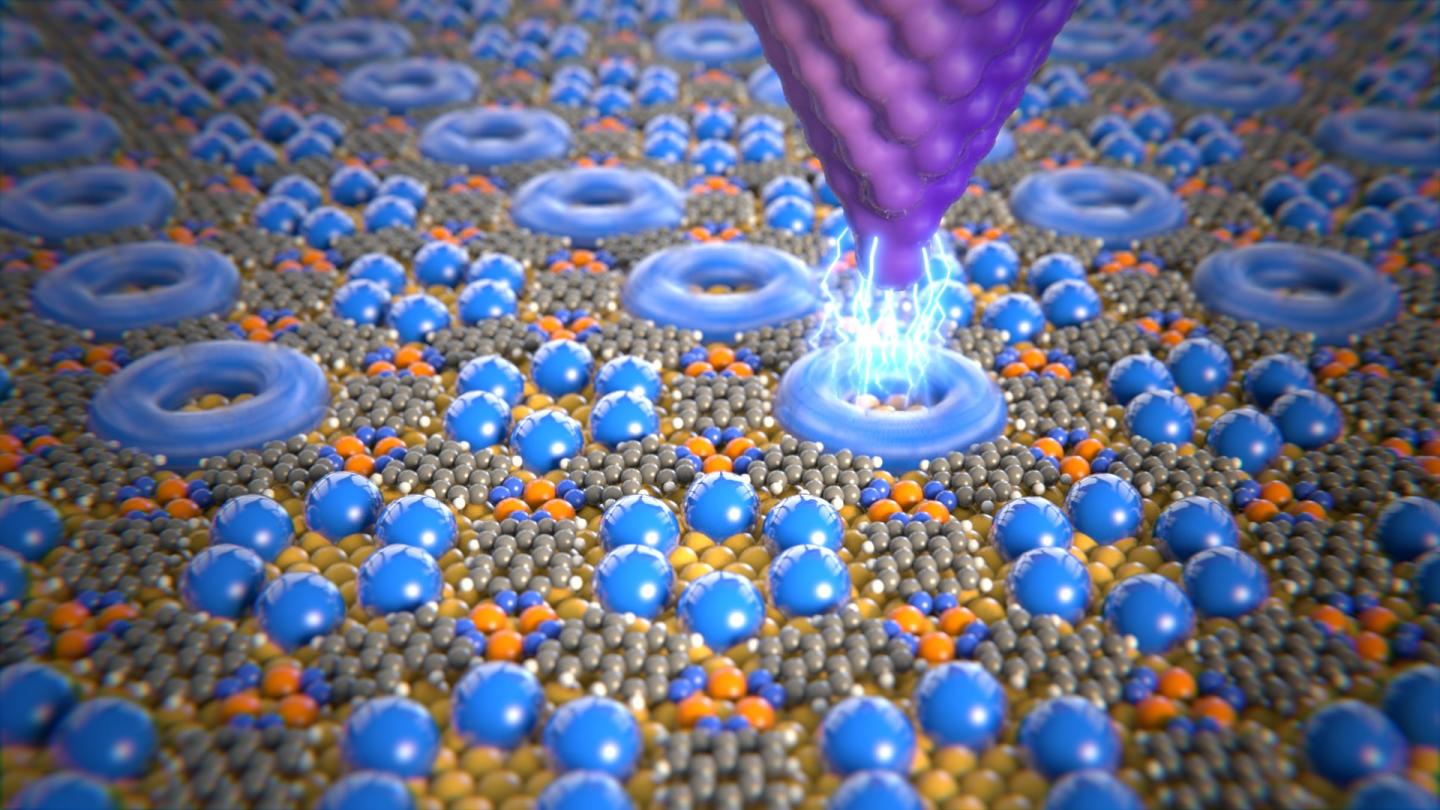 Graphic animation of a possible data memory on the atomic scale: A data storage element -- consisting of only 6 xenon atoms -- is liquefied by a voltage pulse.

Researchers from the University of Basel have reported a new method that allows the physical state of just a few atoms or molecules within a network to be controlled. It is based on the spontaneous self-organization of molecules into extensive networks with pores about one nanometer in size. In the journal 'small', the physicists reported on their investigations, which could be of particular importance for the development of new storage devices.

Around the world, researchers are attempting to shrink data storage devices to achieve as large a storage capacity in as small a space as possible. In almost all forms of media, phase transition is used for storage. For the creation of CD, for example, a very thin sheet of metal within the plastic is used that melts within microseconds and then solidifies again. Enabling this on the level of atoms or molecules is the subject of a research project led by researchers at the University of Basel.

Changing the phase of individual atoms for data storage

In principle, a phase change on the level of individual atoms or molecules can be used to store data; storage devices of this kind already exist in research. However, they are very labor-intensive and expensive to manufacture. The group led by Professor Thomas Jung at the University of Basel is working to produce such tiny storage units consisting of only a few atoms using the process of self-organization, thereby enormously simplifying the production process.

To this end, the group first produced an organometallic network that looks like a sieve with precisely defined holes. When the right connections and conditions are chosen, the molecules arrange themselves independently into a regular supramolecular structure.

The physicist Aisha Ahsan, lead author of the current study, has now added individual Xenon gas atoms to the holes, which are only a bit more than one nanometer in size. By using temperature changes and locally applied electrical pulses, she succeeded in purposefully switching the physical state of the Xenon atoms between solid and liquid. She was able to cause this phase change in all holes at the same time by temperature. The temperatures for the phase transition depend on the stability of the Xenon clusters, which varies based on the number of Xenon atoms. With the microscope sensor she has induced the phase change also locally ,for an individual Xenon containing pore.

As these experiments have to be conducted at extremely low temperatures of just a few Kelvin (below -260°C), Xenon atoms themselves cannot be used to create new data storage devices. The experiments have proven, however, that supramolecular networks are suited in principle for the production of tiny structures, in which phase changes can be induced with just a few atoms or molecules.

"We will now test larger molecules as well as short-chain alcohols. These change state at higher temperatures, which means that it may be possible to make use of them," said Professor Thomas Jung, who supervised the work.

Graphic animation of a potential data storage device on the atomic scale: a data storage element - made of only six Xenon atoms - is liquefied using a voltage pulse.