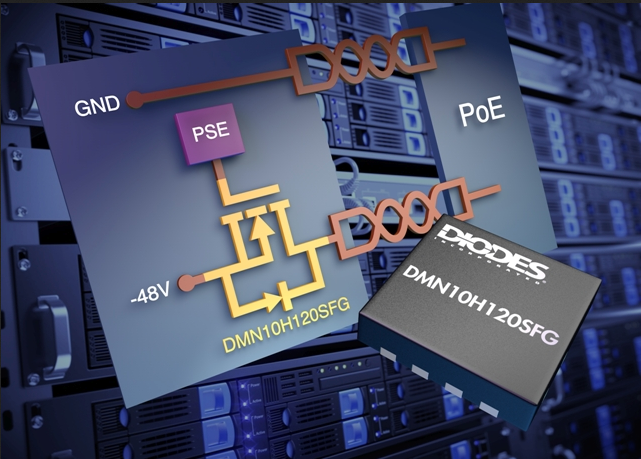 The DMN10H120SFG MOSFET introduced by Diodes Incorporated is designed as a switch for IEEE 802.3 compliant 48V Power-over-Ethernet (PoE) systems. This switch enables the delivery of power through the Ethernet cable to end-applications such as wireless access points, VoIP phones, point-of-sale terminals, call systems, IP security cameras and building management devices.

In power-sourcing equipment such as LAN routers and midspans, this 100V N channel MOSFET switches power to the CAT5 (or CAT6) network cable. The cable then provides both power and data, which reduces system costs by eliminating the power supply in the end-equipment. It also protects end-users because PoE operates between 44V to 57V, which meets the 60V Safety Extra Low Voltage (SELV) rating, removing the need for rigorous isolation and certification of end-equipment while also easing system maintenance. I2R losses are minimized when operating at these voltage levels and this helps maximize power delivery to the end-equipment and improve efficiency.

With a 100V BVDSS rating the DMN10H120SFG MOSFET provides plenty of headroom for 48V PoE operation. The DMN10H120SFG also offers an extended safe-operating-area (SOA) that can withstand the power dissipation due to short-circuit fault conditions, such as an Ethernet cable breaking, until the PSE controller detects the fault and switches off. During this fault condition the MOSFET goes into linear mode and needs to dissipate 30W for at least 20ms, which is achieved even with a +60°C elevated operating temperature.

The DMN10H120SFG is offered in the space-saving PowerDI3333 package. Within its extensive 100V DMN10H family, Diodes also offers SOT23, SOT223 and TO252 (DPAK) packages. The avalanche-rugged DMN10H099SK3, for example, in TO252 is 100% unclamped-inductive-switch (UIS) tested to ensure it can withstand the energy pulse in switching inductive loads such as coils, motors and relays.

Pricing for the DMN10H series MOSFETs in 10k piece quantities ranges from $0.12 to $0.30 each, dependent on specification and package type.