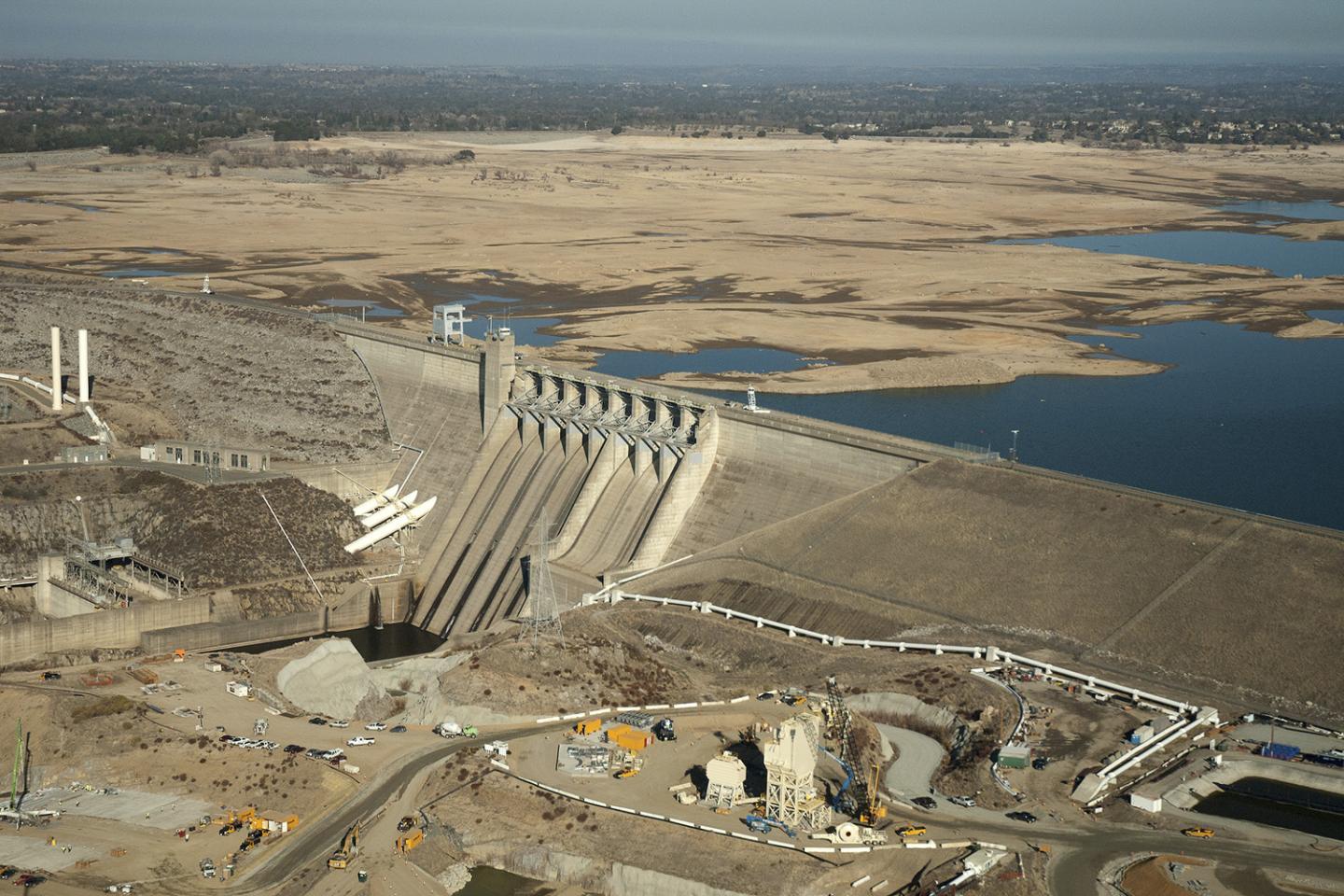 This photo is an aerial view of Folsom Dam and Lake in Sacramento County shows low water levels in January 2014.

When hydropower runs low in a drought, western states tend to ramp up power generation - and emissions - from fossil fuels. According to a new study from Stanford University, droughts caused about 10 percent of the average annual carbon dioxide emissions from power generation in California, Idaho, Oregon and Washington between 2001 and 2015.

"Water is used in electricity generation, both directly for hydropower and indirectly for cooling in thermoelectric power plants," said climate scientist Noah Diffenbaugh, the Kara J. Foundation professor in Stanford's School of Earth, Energy & Environmental Sciences (Stanford Earth) and senior author of the study. "We find that in a number of western states where hydropower plays a key role in the clean energy portfolio, droughts cause an increase in emissions as natural gas or coal-fired power plants are brought online to pick up the slack when water for hydropower comes up short."

The study, published Dec. 21 in Environmental Research Letters, shows emissions of sulfur dioxide and nitrogen oxides - air pollutants that can irritate lungs and contribute to acid rain and smog - also increased in some states as a result of droughts. Some of the largest increases in sulfur dioxide took place in Colorado, Utah, Washington and Wyoming. The largest increases in nitrogen oxides occurred in California, Colorado, Oregon, Utah, Washington and Wyoming.

In total, the researchers found drought-induced shifts in energy sources led to an additional 100 million tons of carbon dioxide across 11 western states between 2001 and 2015. That's like adding 1.4 million vehicles per year to the region's roadways. The power sector in California, which has a mandate to go carbon-free by 2045, contributed around 51 million tons to the total. Washington, where the legislature is expected in January 2019 to consider a proposal to eliminate fossil fuels from electricity generation by 2045, contributed nearly 22 million tons.

"For California, Oregon and Washington, which generate a lot of hydropower, the drought-induced increases in carbon dioxide emissions represent substantial fractions of their Clean Power Plan targets," said postdoctoral researcher Julio Herrera-Estrada, lead author of the study. Enacted in 2015, the Clean Power Plan established nationwide limits on greenhouse gas emissions from power plants. The policy has been rolled back under the Trump administration, but according to Herrera-Estrada, it remains a valuable benchmark for targets that states or the federal government may eventually set for the electricity sector.

Western states in recent years have suffered the kind of intense droughts that scientists expect to become more common in many regions around the world as global warming continues. The new research suggests that failure to prepare for the emissions impact of these droughts could make achieving climate and air quality goals more difficult.

"To have reliable and clean electricity, you have to make sure you have an energy portfolio that's diverse, such that low-emissions electricity sources are able to kick in during a drought when hydropower cannot fully operate," Herrera-Estrada said.

The western United States offers an ideal testing ground for understanding relationships between droughts and emissions from the power sector. In addition to plentiful data from recent droughts, the researchers could examine how emissions change with different types of backup power plants because states across the region have a wide variety of energy mixes.

Colorado, for example, tends to ramp up coal-fired power plants when hydropower dwindles, while California and Idaho increase generation from natural gas. Oregon, Washington and Wyoming tend to increase both. Wyoming and Montana increase coal generation in part so that they can export the electricity to surrounding states that are also experiencing declines due to drought.

"For decades, people have been looking at the impacts of droughts on food security and agriculture," Herrera-Estrada said. "We're less aware of exactly how droughts impact the energy sector and pollutant emissions in a quantitative and systematic way."

Previous efforts to understand how drought affects electricity have mostly relied on models of power plants, which require researchers to make assumptions about factors such as the plants' efficiencies and decisions about how water resources are allocated. For the current paper, the scientists analyzed statistics reported by the U.S. Energy Information Administration and the U.S. Environmental Protection Agency.

According to Herrera-Estrada, the new study can help validate existing models, which can then be used to gain a more complete picture of the risks associated with droughts and to inform efforts to tamp down drought-induced emissions.

Far beyond the American West, droughts may drive similar emission increases in places that normally rely heavily on hydropower and turn to natural gas, coal or petroleum when waterways run low.

"Other parts of the world depend on hydropower even more than the western U.S.," said Diffenbaugh, who is also Kimmelman Family senior fellow at Stanford's Woods Institute for the Environment. "Our results suggest that hydro-dependent regions may need to consider not only primary generation but also backup generation in order to meet emissions reduction targets, such as those in the UN Paris Agreement."