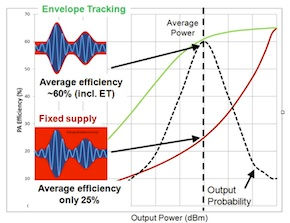 The concept of envelope tracking for radio frequency amplifiers is not new. But the ever-increasing need for better base station efficiency and output power, as well as the need for improving RF power amplifier efficiency, is driving intense research and development in envelope tracking.

Envelope Tracking
RF power amplifiers are used to transmit all of our voice and data through satellites, base stations, and cell phones. Conventional RF power amplifiers operate at a fixed power level delivering maximum power whether or not the transmitter needs it. When envelope tracking is deployed in a RF power amplifier, the amplifier does not operate at a fixed power level, but precisely fits the power to the amplifier’s signal modulation needs. This is illustrated in Figure 1. The power modulation required is enabled by EPC’s third generation, EPC8000 series FETs that can operate at the high voltages and switching speeds needed for efficient envelope tracking.

RF power amplifiers for 4G LTE technology have higher power requirements than previous generations and are the biggest beneficiary of envelope tracking. Today, 4G LTE technology is just 9% of the global wireless platform, but will eventually supersede earlier 3G networks in the world of data transmission. Envelope tracking can double the energy efficiency of RF power amplifiers.

Wireless Power: Cut the cord!
Wireless power applications are gaining popularity in many commodity products such as mobile phone chargers. Most of the wireless power solutions to date have focused on tight coupling with induction coil solutions operating at frequencies around 200 kHz. This is the Qi standard and its major drawbacks are conversion efficiency and its requirement for exact placement.

Industry leaders including Qualcomm, Intel, Broadcom, Samsung, Delphi, and Witricity have established a consortium (A4WP) for the development and commercialization of a recently selected high-frequency standard (6.78 MHz) for wireless power transmission (Highly Resonant Power Transfer). The fast switching capability of eGaN FETs is ideal for highly resonant power transfer applications, while MOSFETs do not perform well at these frequencies.

Initial applications for wireless power transfer include cell phones, game controllers, laptop computers, tablets, and even electric vehicles that re-charge without being plugged in or having actual physical contact, proximity within a specified range is all that is required. The global wireless power transfer market CAGR is estimated at 55.5%. Demand for automotive wireless charging alone is expected to triple in the next 8 years and is forecasted to be $15.1B by 2020.