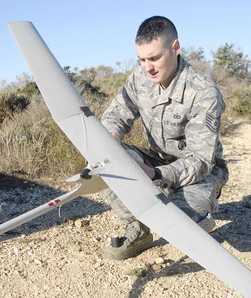 The total market value for electric unmanned aerial vehicles will reach over one Billion dollars by 2023 according to findings in the new IDTechEx report, Electric Unmanned Aerial Vehicles (UAV) 2013-2023. This report includes hybrid and pure electric powertrains and electrics being used or considered for UAVs and the new missions made possible by electrification. UAVs survey military threats but also the melting ice caps and natural disasters. They can carry ordnance but also drop aid.

IDTechEx finds many benefits of such powertrains but also notes they are not just incremental improvements, because most of the mechanical, electric and electronics parts are changing radically. This applies to UAVs for civil as well as military use. With over $100 million in system sales, AeroVironment's Raven family of hand launched UAVs are the world's best-selling pure electric UAVs in number and value. Some can land on water therefore civil and military missions are enabled.

Electric power makes possible the use of wheel power for take-off because electric motors can give maximum torque from stationary. It gives near silent operation valued in military and civil applications. For long range UAVs where batteries are inadequate and hybrid powertrains are necessary, there can still be silent take-off and landing. Only electrics can give us new forms of UAVs, such as intelligently swarming robot flies. This being just one example of new missions made possible by electric power in UAVs. There is work on unmanned aircraft harvesting power from winds at altitude using kites and beaming it to earth. No, this does not break the laws of physics.

There is a concept of a military UAV, maybe hybrid electric that performs its mission then dives like a gannet and hides underwater. Vertical take-off and landing UAVs are now commonplace, the best known being toys that can be programmed in a desired pattern of flight but there are also military and professional civil versions being deployed. Hybrid electric helicopters sometimes use the electrics as an emergency device, a parachute if you will, that permits somewhat controlled landing when the main gear fails, saving lives. These are new paradigms from electric power.

At the small end, the three gram DeFly Micro is intended for searching buildings in danger of collapse after disasters, searching for people. It has double wings like a dragonfly and a wingspan of 10 cms (4 inches), flying for three minutes at 5 m/s. A one gram version is now being designed. Inspired by the herring gull flight, the engineers of Festo's Bionic Learning Network came up with the 485 gm (about 1 lb) 25W SmartBird, with excellent aerodynamic qualities and extreme agility. It is capable to take off autonomously and lift-up in the air by means of its flapping wings alone, without the aid of other devices to provide lift. SmartBird has a wingspan of 2 meters (6.5 feet). Its wings not only beat up and down, but also twist at specific angles. This is made possible by an active articulated torsional drive, which in conjunction with a complex control system makes for unprecedented efficiency in flight operation. Propulsion and lift are achieved solely by the flapping of the wings.

Eager adoption of new components
The relatively new lithium-ion polymer batteries have been used in UAVs as have laminar batteries and we can expect other advances such as flexible solar power and other smart skin plus structural components. Here we shall see the new developments of ultra-light electric traction motors. There are UAVs held aloft by lasers because they operate electrically and large ones that take-off in parts and assemble into huge solar powered surveillance UAVs at high altitude. Boeing has US military funding to make an upper atmosphere fixed wing UAV that stays aloft for five years on sunshine alone, the exceptionally lightweight electric motors needed being designed by Newcastle University in the UK and the airframe being developed by Qinetiq in the UK. Yes, this is a global business in terms of expertise, only the investment being dominated by the USA.

Collaborative missions between all sizes of electrically powered UAV will be commonplace, initially in military applications. Both electrically-driven UAV airships (eg using photovoltaics, some with fuel cells and batteries) and fixed wing aircraft can be involved. In the USA, Extreme Capacitor sees the "fit and forget" benefit of traction supercapacitors, which are improving faster than batteries, will lead to them being adopted in electric aircraft including UAVs.

The 3D printing being developed by Warwick University in the UK, that incorporates ink printed circuit patterns and components, will also be relevant. Many components and subsystems are merging in the meantime with gearboxes and motor controllers inside motor housings and advanced carbon fiber bodywork is being adopted. For many UAVs, including those in the upper atmosphere, multiple energy harvesting is in sight. For example, energy harvesting shock absorbers, regenerative soaring and thermoelectric generation of electricity are being considered.

A very different future
It is with UAVs that we see many of the most radical actual and prospective advances in disruptive EV technology. In 2013, an example of this was the work at Georgia Tech on plasma leading edges to reduce drag. This will first appear on UAV, both VTOL and fixed wing, then later on manned aircraft, wind turbines and so on if successful. Plasmas reduce drag for moving objects and they can be created on the leading edge of a wing by stabilising laminar flow, reducing turbulence. A high voltage is applied between an exposed electrode and one buried in the wing. That can create a flow of up to 10 meter/second on a stationary wing as it accelerates air in the boundary layer which helps to prevent it peeling away from the surface. Up to 40% reduction in drag is in prospect and "only" 30% reduction can give 5% fuel saving.

The system could replace ailerons, flaps and on VTOL craft, blade feathering. Made powerful enough, plasma control could replace engines - but that is a distant prospect. For now, we see many advances in UAV technology that leverage electrics and this is just one. Others include mini range extenders such as mini turbines being developed by Bladon Jets in the UK, rotary combustion engines in the USA and free piston engines in Germany that inherently produce electricity without need for a shaft to a generator.