Electric Vehicles Would be a Breath of Fresh air for Houston 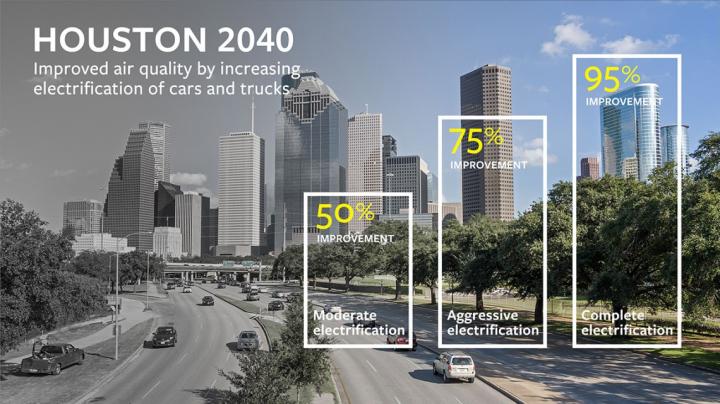 ITHACA, N.Y. - Cornell University researchers are expressing hope for the future of Houston's breathable air, despite the city's poor rankings in the American Lung Association's 2019 "State of the Air" report.

Researchers say replacing at least 35 percent of Houston's gasoline cars and diesel trucks with electric vehicles by 2040 will reduce pollution and improve air quality by 50 percent.

"The built environment plays a significant role in affecting our daily life and health," said H. Oliver Gao, professor of civil and environmental engineering and senior author of "Potential Impacts of Electric Vehicles on Air Quality and Health Endpoints in the Greater Houston Area in 2040," published in Atmospheric Environment.

"While transportation provides us with mobility, it impacts our environment and our public health," said Gao, who directs Cornell's Center for Transportation, Environment and Community Health and is a fellow at Cornell's Atkinson Center for a Sustainable Future. "We are enjoying this mobility at a very high cost."

Shuai Pan, postdoctoral associate in civil and environmental engineering, along with Gao and a team of chemists and engineers, modeled four scenarios using various levels of electric car adoption to see how Houston's air quality and public health likely would respond two decades from now.

"The population in 2040 Houston will see a huge increase, but we can apply new technology to reduce emissions, improve air quality and think about health," said Pan, who earned his Ph.D. in atmospheric science from the University of Houston in 2017.

If left unchecked, current ozone and particulate-matter levels would result in 122 more premature deaths annually throughout greater Houston by 2040. With moderate or aggressive electrification for cars and trucks, the numbers reflect air-quality improvement, with prevented premature deaths at 114 and 188, respectively.

In the case of complete turnover to electric vehicles, the number of prevented premature deaths per year around Houston shoots to 246.

"Mayors or policymakers - who care about the environment, the economy and public health - must advocate for electrification," Gao said. "The knowledge is there, but we need mayors and city planners to be creative and innovative to design policies that would help the electrification of the transportation sector."