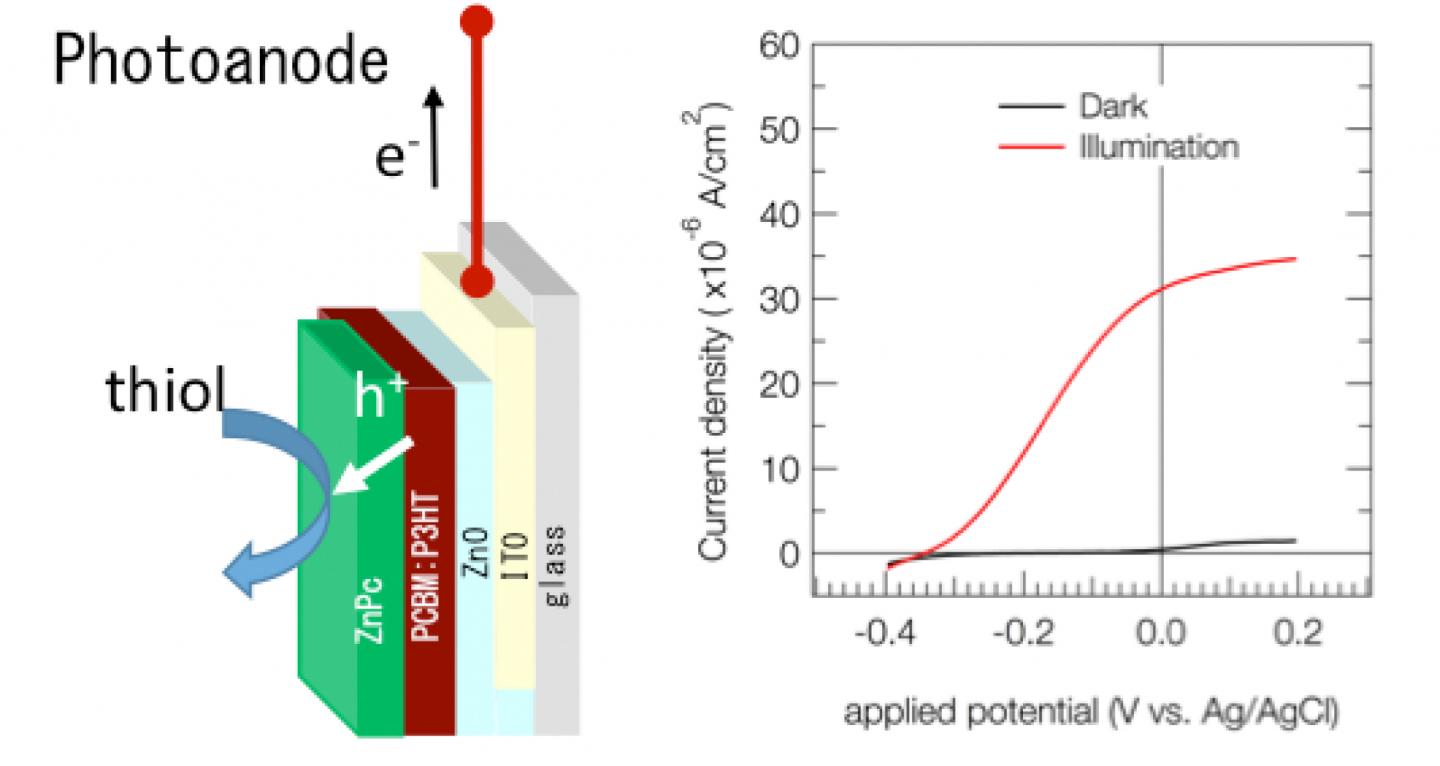 The structure of the proposed device, showing how the generated holes (h+) are used to facilitate thiol oxidation. The measured current increases dramatically under illumination and application of a slight potential.

A research team from Tokyo Institute of Technology (Tokyo Tech) and Kanazawa University develops an eco-friendly device that uses solar energy to catalyze an electrochemical oxidation reaction with high efficiency.

Green energy sources constitute a hot research field globally because of the current environmental crisis and the necessity to avoid non-renewable energy (fossil fuels). Researchers have been seeking ways to harness and harvest solar energy for decades, and photovoltaic devices, which convert light into electricity, are in high demand.

The study of these devices has progressed much since their interest last sparked in the 1970s after the economic shocks caused by oil prices. While most advances where made for silicon-based solar cells, scientists have demonstrated that organic photovoltaic devices can also achieve acceptable performance. Using organic materials is advantageous because they are printable and paintable as environmentally friendly processes unlike silicon processes. Organic materials also come in great variety, making it possible to tailor them for each specific application.

Organic photovoltaic solar cells consist of an "active layer" sandwiched between two different electrodes (a transparent front electrode and a back electrode). The active layer is where the magic starts; the energy from the photons of the incident light is transferred to the electrons of the material through collisions, exciting them and setting them into motion, leaving behind positively charged pseudo-particles known as "holes." These do not technically exist, but can be used to approximately describe the electrical behavior of the material. The importance of the electrodes lies in that each one must collect one type of these charged particles (one gathers holes, and the other electrons) to prevent them from recombining in the active layer. The electrons flow through an external circuit that is connected to both electrodes, creating electricity from light.

However, it is challenging to collect large numbers of electrons and holes at the electrodes and convert light into electricity with high efficiency. Some researchers have proposed that it would be beneficial to directly use the generated holes or electrons in chemical reactions near the active layer. Thus motivated, a research team including Dr. Keiji Nagai from Tokyo Tech and Kanazawa University proposed a simple fabrication procedure for an organic photoelectrochemical device that can harvest solar energy to promote a chemical oxidation reaction.

Their approach starts with a conventional organic photovoltaic device, which can be easily fabricated and whose characteristics are well known, and mechanically removing the back electrode where holes are collected. The exposed active layer is coated with ZnPc and submerged in thiol, as shown in Fig. 1. The holes generated by the incident light are directly used for thiol oxidation, which is catalyzed (facilitated) by the ZnPc layer. The excited electrons flow out through the remaining front electrode, generating an electric current.

The simplicity and advantages of the fabrication approach and the measured efficiency when harvesting light energy are very promising. "The removal of the back electrode is a promising and repeatable technique for constructing a well-characterized photoelectrochemical cell," explains Dr. Nagai. The researchers also studied the topographic and electrochemical properties of the active layer coated with ZnPc to elucidate the principles of its catalytic activity. "The effects of the ZnPc coating were clearly observed in our analyses and consist of the effective accumulation of photogenerated holes," states Dr. Takahashi of Kanazawa University. Environmentally friendly devices such as the proposed one provide more ways to harvest energy from the sun and get us closer to a greener future.