Electronic map Reveals 'Rules of the Road' in Superconductor 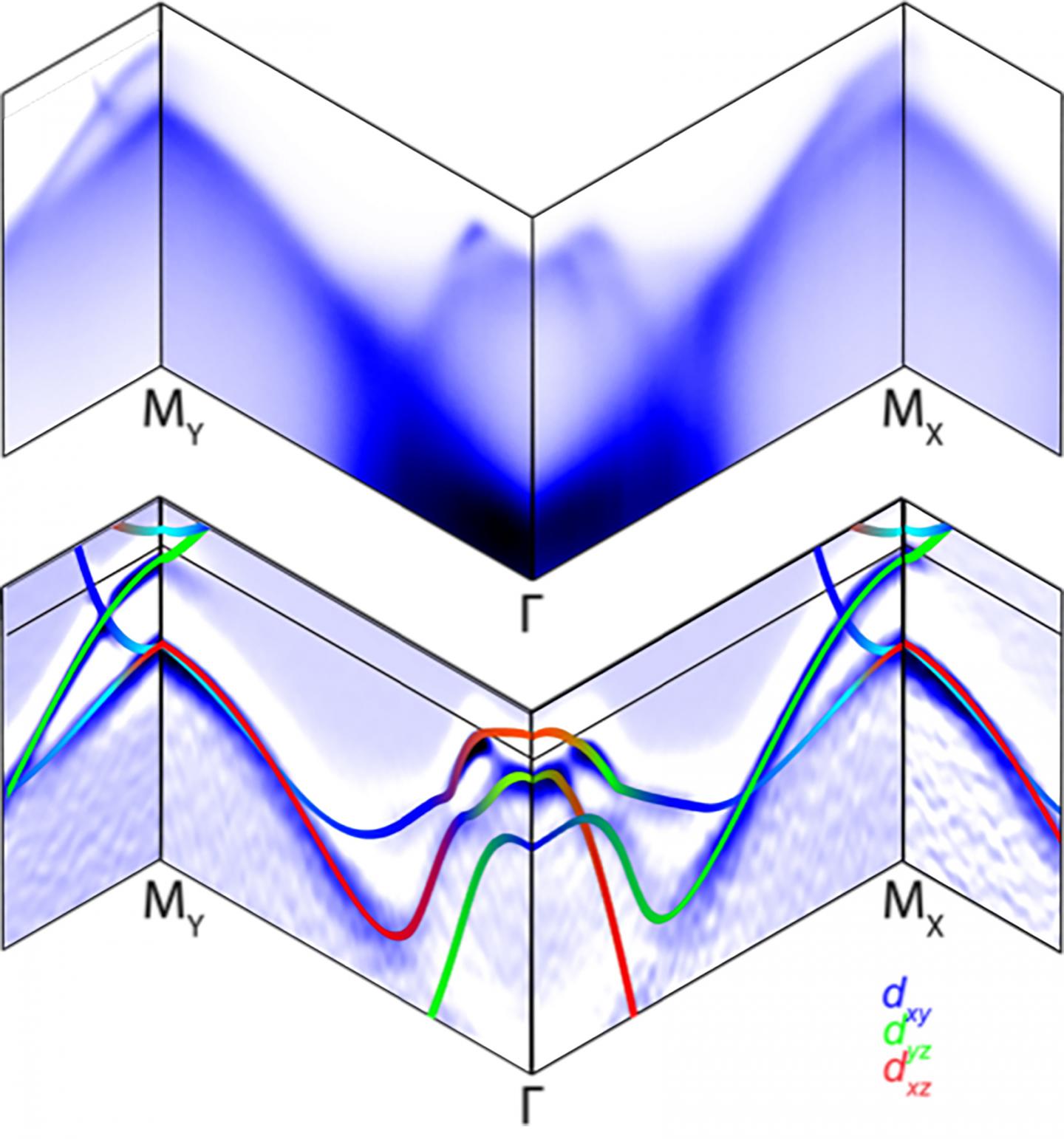 This band structure map for a single crystal of iron selenide is akin to a road map that describes how traffic rules change for electrons as the material cools and the crystal lattice changes shape, becoming elongated in one direction.

Using a clever technique that causes unruly crystals of iron selenide to snap into alignment, Rice University physicists have drawn a detailed map that reveals the "rules of the road" for electrons both in normal conditions and in the critical moments just before the material transforms into a superconductor.

In a study online this week in the American Physical Society journal Physical Review X (PRX), physicist Ming Yi and colleagues offer up a band structure map for iron selenide, a material that has long puzzled physicists because of its structural simplicity and behavioral complexity. The map, which details the electronic states of the material, is a visual summary of data gathered from measurements of a single crystal of iron selenide as it was cooled to the point of superconductivity.

"It's very much like a traffic map," said Yi, who joined Rice's faculty and Center for Quantum Materials (RCQM) early this year. "In the quantum mechanical world, there are all kinds of interesting rules electrons must obey as they move through a crystal. Some materials have fast lanes and slow lanes, and electrons can only cross and change lanes under special circumstances. Other materials have traffic circles where U-turns are forbidden because electrons can move counterclockwise but not clockwise."

Yi began the angle-resolved photoemission spectroscopy experiments for the study during a postdoctoral stint at the University of California, Berkeley. The technically challenging experiments used powerful synchrotron light from the Stanford Synchrotron Radiation Lightsource (SSRL) to coax the crystal to emit electrons.

"In a sense, these measurements are like taking photographs of electrons that are flying out of the material," she said. "Each photograph tells the lives the electrons were living right before being kicked out of the material by photons. By analyzing all the photos, we can piece together the underlying physics that explains all of their stories."

The electron detector tracked both the speed and direction that electrons were traveling when emitted from the crystal. That information contained important clues about the quantum mechanical laws that dictated the traffic patterns at a larger, microscopic scale, where key aspects of superconductivity are believed to arise.

"The fun aspect of our experimental work is making observations of different types of exotic materials and figuring out the quantum mechanical rules that govern electron behavior in those materials," she said. "Ultimately, we hope those rules will guide physicists to new classes and new kinds of materials, hopefully with amazing properties that improve the world."

These rules are encoded in a material's electronic structure, Yi said.

"They're like an electronic fingerprint of a material," she said. "Each material has its own unique fingerprint, which describes the allowed energy states electrons can occupy based on quantum mechanics. The electronic structure helps us decide, for example, whether something will be a good conductor or a good insulator or a superconductor."

Electrical resistance is what causes wires, smartphones and computers to heat up during use, and it costs billions of dollars each year in lost power on electric grids and cooling bills for data centers. Superconductivity, the zero-resistance flow of electricity, could eliminate that waste, but physicists have struggled to understand and explain the behavior of unconventional superconductors like iron selenide.

Yi was in graduate school when the first iron-based superconductors were discovered in 2008, and she's spent her career studying them. In each of these, an atom-thick layer of iron is sandwiched between other elements. At room temperature, the atoms in this iron layer are arranged in checkerboard squares. But when the materials are cooled near the point of superconductivity, the iron atoms shift and the squares become rectangular. This change brings about direction-dependent behavior, or nematicity, which is believed to play an important but undetermined role in superconductivity.

"Iron selenide is special because in all of the other iron-based materials, nematicity appears together with magnetic order," Yi said. "If you have two orders forming together, it is very difficult to tell which is more important, and how each one affects superconductivity. In iron selenide, you only have nematicity, so it gives us a unique chance to study how nematicity contributes to superconductivity by itself."

The upshot of nematicity is that the traffic patterns of electrons -- and the quantum rules that cause the patterns -- may be quite different for electrons flowing right-to-left, along the long axis of the rectangles, than for the electrons flowing up-and-down along the short axis. But getting a clear look at those traffic patterns in iron selenide has been challenging because of twinning, a property of the crystals that causes the rectangles to randomly change orientation by 90 degrees. Twinning means that long-axis rectangles will run left-to-right about half of the time and up-and-down the other half.

Twinning in iron selenide made it impossible to obtain clear, whole-sample measurements of nematic order in the material until Rice physicists Pengcheng Dai and Tong Chen published a clever solution to the problem in May. Building on a detwinning technique developed by Dai and colleagues in 2014, Chen found he could detwin fragile crystals of iron selenide by gluing them atop a sturdier layer of barium iron arsenide and turning a screw to apply a bit of pressure. The technique causes all the nematic layers in the iron selenide to snap into alignment.

Dai and Chen were co-authors on the PRX paper, and Yi said the detwinning technique was key to getting clear data about the impact of nematicity on iron selenide's electronic behavior.

"This study would not have been possible without the detwinning technique that Pengcheng and Tong developed," Yi said. "It allowed us to take a peek at the arrangements of electronic states as the material system gets ready for superconductivity. We were able to make precise statements about the availability of electrons belonging to different orbitals that could participate in superconductivity when nematic rules have to be obeyed."

Yi said the data show that the magnitude of nematic shifts in iron selenide are comparable to the shifts measured in more complicated iron-based superconductors that also feature magnetic order. She said that suggests the nematicity that's observed in iron selenide could be a universal feature of all iron-based superconductors, regardless of the presence of long-range magnetism. And she hopes that her data allow theorists to explore that possibility and others.

"This set of measurements will provide precise guidance for theoretical models that aim to describe the nematic superconducting state in iron-based superconductors," she said. "That's important because nematicity plays a role in bringing about superconductivity in all of these materials."