Electronics at the Speed of Light 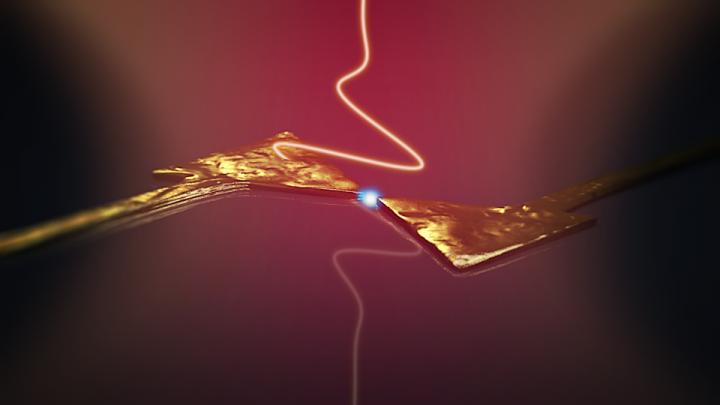 This is an illustration of how electrons can be imagined to move between two arms of a metallic nanoantenna, driven by a single-cycle light wave.

Contemporary electronic components, which are traditionally based on silicon semiconductor technology, can be switched on or off within picoseconds (i.e. 10-12 seconds). Standard mobile phones and computers work at maximum frequencies of several gigahertz (1 GHz = 109 Hz) while individual transistors can approach one terahertz (1 THz = 1012 Hz). Further increasing the speed at which electronic switching devices can be opened or closed using the standard technology has since proven a challenge. A recent series of experiments - conducted at the University of Konstanz and reported in a recent publication in Nature Physics - demonstrates that electrons can be induced to move at sub-femtosecond speeds, i.e. faster than 10-15 seconds, by manipulating them with tailored light waves.

"This may well be the distant future of electronics", says Alfred Leitenstorfer, Professor of Ultrafast Phenomena and Photonics at the University of Konstanz (Germany) and co-author of the study. "Our experiments with single-cycle light pulses have taken us well into the attosecond range of electron transport". Leitenstorfer and his team from the Department of Physics and the Center for Applied Photonics (CAP) at the University of Konstanz believe that the future of electronics lies in integrated plasmonic and optoelectronic devices that operate in the single-electron regime at optical - rather than microwave - frequencies.