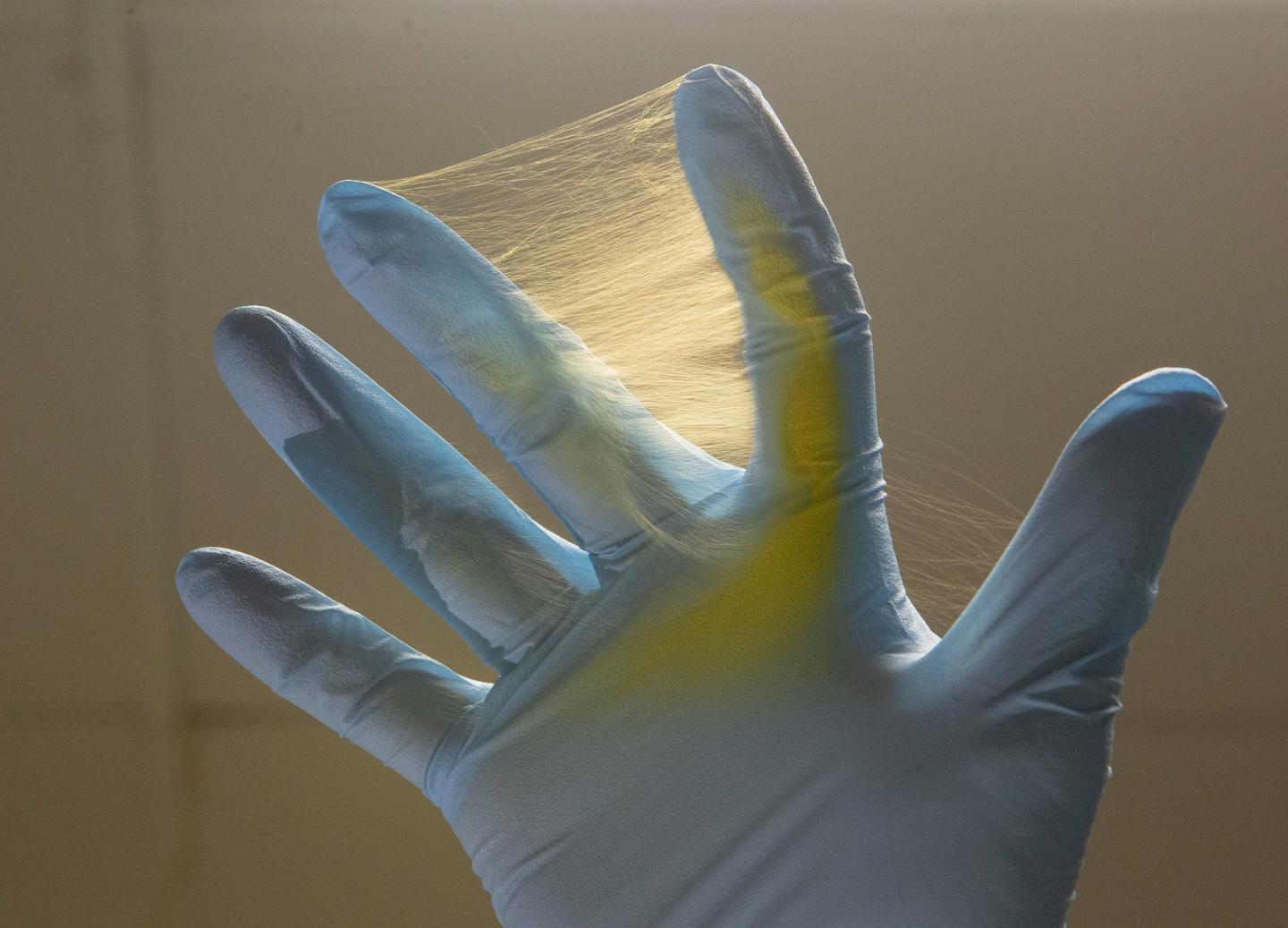 When you visit Andrew Steckl's lab at the University of Cincinnati, you see a nondescript glass box that weaves together different fibers.

Steckl's lab is coming up with new applications for a fabrication process called coaxial electrospinning, which combines two or more materials into a fine fiber for use in industry, textiles or even medicine. The machine pumps two or more liquid polymers into a nozzle that drips like a leaky faucet. Once electric voltage is applied, the drip turns into a spiderweb-fine jet composed of a core of one material surrounded by a sheath of another.

"It looks deceptively simple. But the chemistry is the secret sauce," he said.

Steckl is an Ohio Eminent Scholar and professor in UC's College of Engineering and Applied Science. His latest study, published this month on the cover of the journal ChemPlusChem, outlined the many applications of a manufacturing process that combines the amazing properties of one material with the powerful benefits of another.

Electrospinning was invented in 1902 and was first applied to textiles in the 1930s. But only now are researchers realizing its full potential. Steckl's Nanoelectronics Laboratory has been preoccupied with new combinations of "ingredients" to take advantage of their unique benefits.

"The beauty is you can have combinations of polymers with properties you don't normally find in nature," Steckl said.

He has spent much of the past decade investigating the vast potential of electrospinning.

For example, researchers can combine a stiff core surrounded by soft, flexible or adhesive material. Or they can create a water-resistant shell surrounding a compound that dissolves quickly in water.

One drawback has been producing enough material for commercial use. But dozens of companies in the United States and around the world are coming up with large-scale production systems for electrospun fibers. Steckl is working with research partners at UC and other research universities to explore the possibilities.

The electrospun fiber would be a tampon-like application used to trap and kill sperm. Another version could release anti-infective drugs to prevent sexually transmitted diseases, Pauletti said.

Steckl said they hope to prove the device is both easier to use and more effective than other sponge-type contraception.

"Chemotherapy essentially is whole-body treatment. The treatment has to get through the blood-brain barrier, which means the whole-body dose you get must be much higher," Steckl said. "This can be dangerous and have toxic side effects."

Steckl and research partners Dr. Henry Brem and Betty Tyler at Johns Hopkins University are pioneering a treatment in which the glioblastoma lesion is removed and a coaxial electrospun capsule is applied to administer the medicine locally over days or weeks. Brem and Tyler previously developed a treatment wafer called Gliadel in 2003 for glioblastoma.

Tyler, who manages the Hunterian Neurosurgical Laboratory at Johns Hopkins, said implanting the Gliadel wafer loaded with chemotherapy at the site of the removed lesion applies medicine where it's needed most at a concentration that would be difficult to achieve otherwise without exposing a patient to a toxic dose.

So far, Steckl said, animal trials have shown that electrospun fibers provide even better results because surgeons can apply different combinations of treatments that deliver medicine for the desired duration.

"Dr. Steckl's unique electrospun formulation was appealing to us for multiple reasons," Tyler said. "It has the capability to slowly release its payload, it's biocompatible and multiple drugs can be loaded and released from it."

Tyler said they plan to apply electrospinning to other FDA-approved drugs in unique combinations for the treatment of brain tumors.

"Our hope is to deliver these agents using Dr. Steckl's technology to ultimately increase therapeutic options for patients with brain tumors," Tyler said.

Steckl said the large surface area and custom properties of the fibers make them an ideal drug-delivery system. For example, patients who have to take drugs multiple times per day for conditions such as Parkinson's disease might be able to take a single long-acting dose made from electrospun medicines.

"The problem is you may remember your morning dose, but you might forget your afternoon dose," he said. "Should I take another one? Did I take three today? A single longer-lasting dose is a lot simpler."

Steckl said researchers are creating electrospun medicines with fibers that only dissolve at a particular acidity in the digestive system. This could delay or extend the release of the active ingredients.

"It's a pretty clever idea," he said.

"There are unlimited opportunities of collaborations in different disciplines, leading to excellent multidisciplinary research projects," Han said. "I am very excited about collaborating with experts in other fields and institutes."

Han said he has enjoyed working in Steckl's Nanoelectronics Laboratory.

"He is always willing to interact with his students and support them aggressively," Han said. "He is not only dedicated to current research but also enjoys pursuing new research topics."

While UC's research group is not the first to study electrospun fibers, it is producing big results, Steckl said.

"We've broadened the field enormously. We're one of the top research groups in the world working on coaxial electrospinning. It's been great fun," he said.

How does an electrical engineer with no medical background come up with novel solutions in some of medicine's most complex disciplines such as neurosurgery? Steckl said he has a collaborative spirit and a fearlessness to pursue questions far afield from engineering.

"We take our curiosity where it leads us," he said.