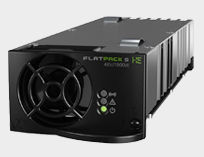 Eltek, a leader in high efficiency (HE) power systems for telecommunications, industrial applications, and renewable energy projects announced an extension to their Flatpack S family with the launch of Flatpack S 48V/1800W HE. With a power density of 47W/in3, the Flatpack S family is designed to fit into applications requiring high power levels with limited depth or limited space. With 1800 Watts in a very compact housing, the new rectifier provides power density far beyond competitive solutions. "With an 1800-Watt version of our Flatpack S module we widen the application area for this product family significantly," says Morten Schøyen, CMO at Eltek. "The rapidly increasing data traffic is driving fiber, backbone and wireless data capacity expansions, and this new member of our Flatpack S family meets the latest customer requirements in this very interesting market". The Flatpack S 48V/1800W HE fits into a number of compact and flexible DC power systems with advanced monitoring and control functions. Flatpack S modules and systems are certified for CE, UL and other local approval bodies. Eltek