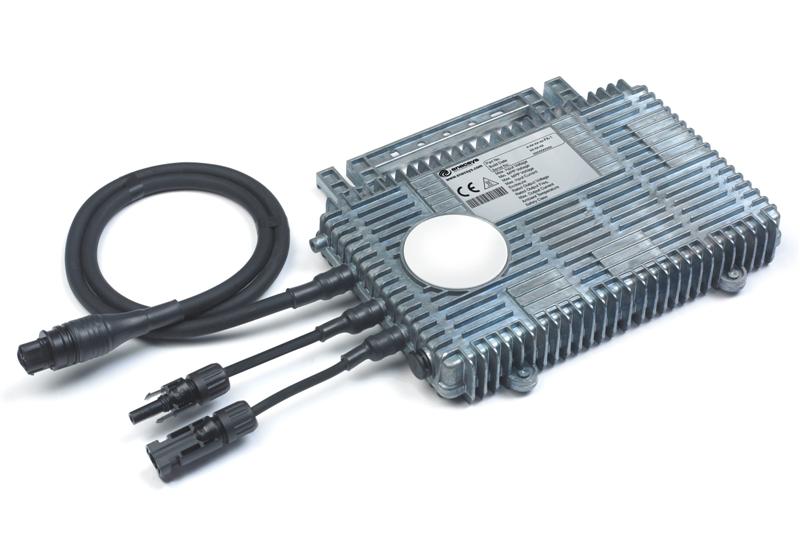 Enecsys Limited, the leader in reliable solar micro inverter systems, will showcase its high reliability solar PV micro inverter and monitoring system at Hall 3, booth E3.3 at SOLAREXPO 2011, May 4-6, in Verona, Italy. Traditionally, domestic and commercial solar PV systems employ series connection of solar modules. A large 'string' inverter is then used to convert the direct current (DC) output from the modules into alternating current (AC) for connection to electricity grid. By contrast, the micro inverter architecture has a small inverter attached on the rail behind each solar module. The grid-compliant AC output of each micro inverter is then connected in parallel with the others. Each combination of module and micro inverter therefore acts as a stand-alone AC power generator, independent of others in the system. When using micro inverters, maximum power point tracking (MPPT) can be applied individually to each PV module to ensure maximum energy harvest. Furthermore, solar PV systems based on micro inverters do not suffer from dramatic reductions in energy harvest when one module, or part of a module, has its output reduced by shading or accumulation of surface debris. Compared with traditional domestic and commercial solar PV systems with string inverters, Enecsys micro inverter systems extract up to 20% more energy over the lifetime of the installation, depending on the layout of the roof. Another significant benefit is that using micro inverters eliminates dangerous high voltage DC from rooftops, reducing risks to system installers and, if there is a fire in the building, to fire fighters. Enecsys SMI series 200 and 240-Watt micro inverters are the first in a growing family of products to be launched in Italy. The company markets these and other micro inverters elsewhere in Europe and in North America. Enecsys micro inverters use patented technology developed at Cambridge University, UK. Their rugged topology eliminates the most unreliable and limited-life components found in other micro inverters, specifically electrolytic capacitors and opto-isolators. Electrolytic capacitors have been replaced by high-reliability plastic film capacitors. Due to the elimination of limited-life components, Enecsys micro inverters achieve greater than 25 years' life expectancy, matching that of solar modules, and the products are supplied with a 20-year warranty. Their reliability has been verified using thermal cycling tests to IEC61215, the same methodology used to test solar modules. Enecsys micro inverters are also unique in maintaining full performance from -40 degrees C to +85 degrees C. They are safety and EMC evaluated to EN 62109, G83, UL1741, TUV and CE. Country-specific requirements, including VDE V 0126-1: 2006 compliance, are achieved through the use of specific Enecsys installation products and UL1741 certification has been received for the SMI240 model. The Enecsys monitoring system integrates a ZigBee wireless system into the micro inverters and connects to the Internet via the Enecsys Gateway. Detailed performance data for each solar module, including both real-time and historical energy production figures are available at the installation site and from anywhere there is an Internet connection. Enecsys CEO, Henrik Raunkjaer, said, " Italian solar PV market is going to be one of the most important for Enecsys. We are confident that Italian installers and end customers will recognise the tangible commercial and technical benefits of the micro inverter architecture. Also, in a country where extremes of temperature are experienced in some regions, our unique design, which has eliminated electrolytic capacitors and provides full performance over a wide temperature range, will be greatly preferred over products with less impressive specifications." About Enecsys Enecsys Limited, develops, manufacturers, and markets world-leading, highly reliable, grid-connected solar micro inverters and monitoring systems for residential and commercial photovoltaic systems that offer an outstanding value proposition. The micro inverter maximizes energy harvest and converts the DC power from each solar module into quality AC power for supply to the electricity grid. The advantages of Enecsys solar micro inverters include: maximized energy harvest, improved safety, increased lifetime and reliability, enhanced performance monitoring, and simplified PV array design and installation. The monitoring system tracks, in real-time, the performance of each solar module and transmits the information through a robust built-in wireless communication system that connects to the Internet. Headquartered in Cambridge, UK, the company also has sales and support offices in Bad Homburg, Germany and in Redwood Shores, California, USA. For more information, please visit www.enecsys.com