Energy-Efficient Accelerator was 50 Years in the Making 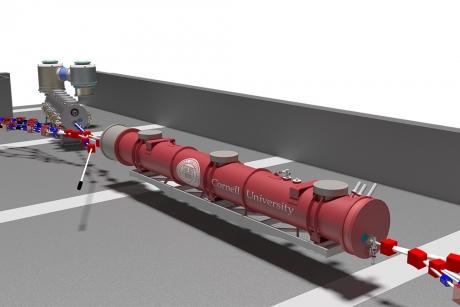 This is an artist's rendering of the main accelerator components in Wilson Lab.

ITHACA, N.Y. - With the introduction of CBETA, the Cornell-Brookhaven ERL Test Accelerator, Cornell University and Brookhaven National Laboratory scientists are following up on the concept of energy-recovering particle accelerators first introduced by physicist Maury Tigner at Cornell more than 50 years ago.

CBETA tests two energy-saving technologies for accelerators: energy recovery and permanent magnets. An energy recovery linac (ERL) like CBETA reclaims the energy of a used electron beam instead of dumping it after the experiment. The recovered energy is used to accelerate the next beam of particles, creating a beam of electrons that can be used for many areas of research. The beams are accelerated by Superconducting Radio Frequency (SRF) units, another energy-efficient technology pioneered at Cornell.

By using permanent magnets, the power that is usually needed to steer the beam with electromagnets is saved. While energy recovery linacs and fixed magnets are being used elsewhere, never before has a group been able to steer four particle beams of different energies simultaneously by using fixed magnets through an ERL.

Imagine four cars traveling at different speeds around a turn. The physics involved is different for each car: One must turn exceptionally hard at a higher speed as opposed to another traveling at a much lower speed. This also holds true for particles with different energy in the beam pipe. Permanent magnets with alternating gradients make it possible to steer each particle of different energy within the same 120 mm-wide chamber.

While this method recycles energy, it also creates beams that are much more powerful: They are more tightly bound, can produce brighter and more coherent radiation, can have higher currents, and can produce higher luminosity in colliding-beam experiments.

"The ERL process was invented at Cornell University 50 years ago, and having its first demonstration in a multi-turn SRF ERL shows Cornell's strong and continuing tradition in this research field," said Georg Hoffstaetter, Cornell professor of physics and CBETA principal investigator.

Combining world-record-holding accelerator components constructed by Cornell with the permanent magnet technology developed by the U.S Department of Energy's Brookhaven National Laboratory (BNL), the CBETA collaboration aims to revolutionize the way in which accelerators are built.

The overall mission for CBETA is to develop a prototype for eRHIC, a 2.4 mile-long electron-ion collider proposed to be built at BNL on Long Island, New York.

Roughly two dozen scientists from BNL and Cornell's Laboratory for Accelerator-based Sciencesand Education (CLASSE) are collaborating on the project. They are running initial tests and expect to complete installation of CBETA by summer 2019. They will test and commission the prototype for eRHIC by spring 2020.

More than 30,000 accelerators are in operation around the world. This prototype ERL has far-reaching implications for biology, chemistry and a host of other disciplines. ERLs are not only envisioned for nuclear and elementary particle physics colliders, as in eRHIC and the LHeC at CERN in Switzerland, but also as coherent X-ray sources for basic research, industrial and medical purposes.

The most complex components of CBETA already exist at Wilson Lab: the DC electron source, the superconducting radio-frequency (SRF) injector linac, the main ERL cryomodule and the high-power beam stop. They were designed, constructed and commissioned in 10 years of National Science Foundation funding.

Said Karl Smolenski, lead engineer for Cornell ERL development: "If we are successful it will be a great thing for science and industry. So many different departments and scientists will be able to use this technology. It will also put us way ahead in the competitive world."