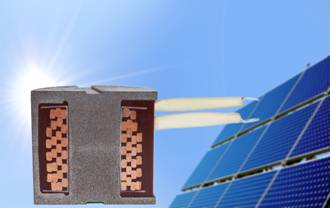 At this year's Intersolar in Munich, Germany, SMP shows inductive components or solar power inverters. The chokes are compact and low-loss with low stray fields and facilitate outstanding inverter efficiency. The chokes' cores consist of powder composites with low magnetostriction, which SMP specifically engineers for solar inverter applications. With the low eddy current and hysteresis losses of these materials, the chokes allow the construction of exceptionally efficient inverters. Their encapsulated design ensures that they emit only low-intensity stray fields, so that they do not affect other components within the inverter. Compact choke design is another important aspect: SMP's chokes occupy 25 percent less space than conventional designs. Extremely quiet in operation, inverters with these chokes can also be used in residential areas. All inductive components from SMP are manufactured in Germany. Almost 100 percent of the products are made to customer-specific orders, using powder composites specifically engineered for each application. SMP chokes can be produced for frequencies of up to 200 kHz and currents of up to 1000 amperes. Their sizes range from 36 mm to 300 mm diameter and their weight from 50 g to 130 kg. Depending on their application, degrees of protections from IP00 to IP66 are available. The chokes can be used in a temperature range up to 180 degrees Celsius. All components are RoHS- and REACH-compliant and the materials used are UL-listed. Beside solar power inverters, SMP's inductive components are used in inverters for wind turbines, in railway engineering and medical engineering as well as in drives and power electronics. SMP at Intersolar 2013, 19 to 21 June 2013, New Munich Trade Fair Centre, Munich, Germany: Hall A5 Stand 44158 SMP