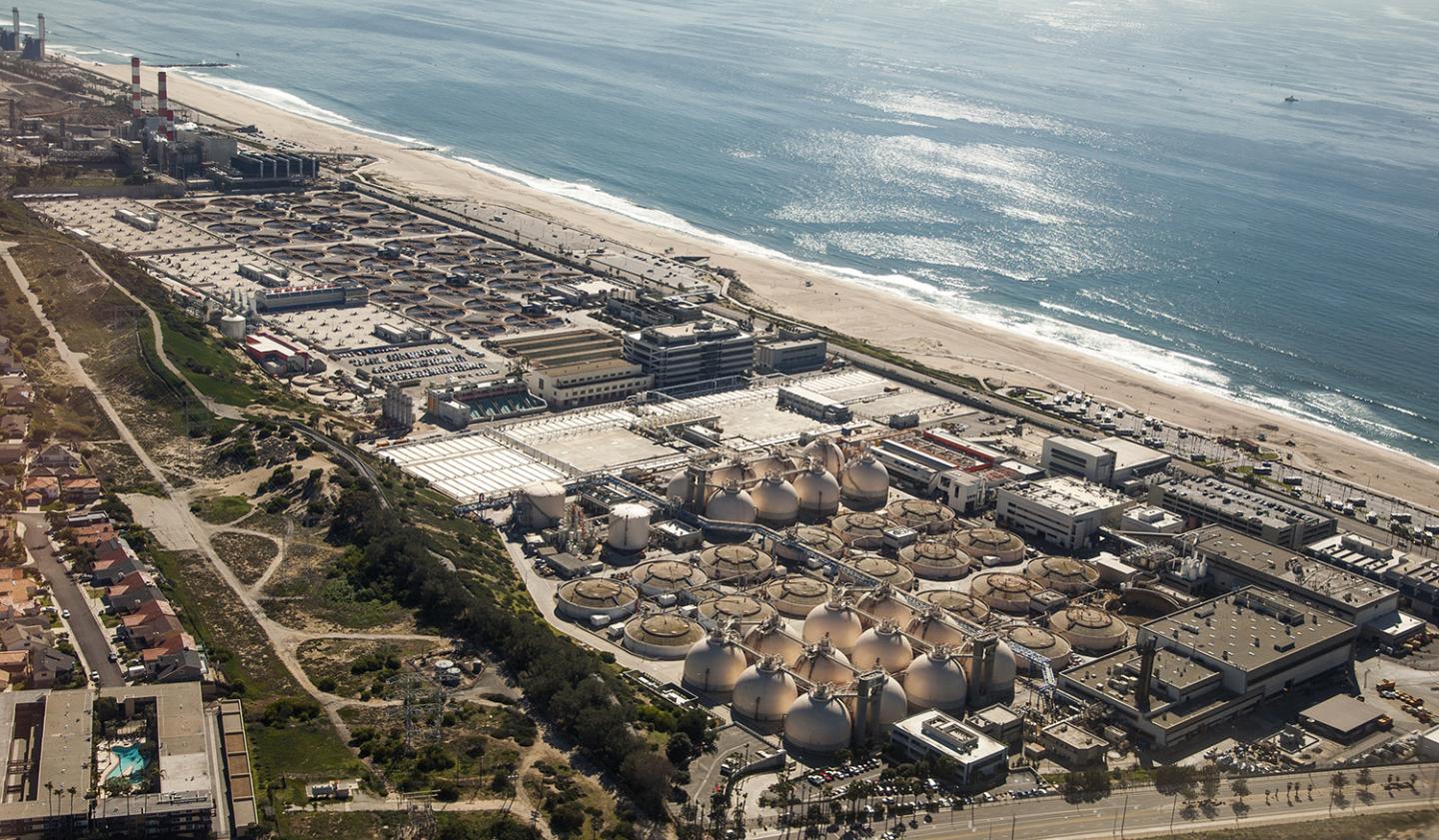 The Hyperion Water Reclamation Plant on Santa Monica Bay in Los Angeles is an example of a coastal wastewater treatment operation that could potentially recover energy from the mixing of seawater and treated effluent.

Salt is power. It might sound like alchemy, but the energy in places where salty ocean water and freshwater mingle could provide a massive source of renewable power. Stanford researchers have developed an affordable, durable technology that could harness this so-called blue energy.

"Blue energy is an immense and untapped source of renewable energy," said study coauthor Kristian Dubrawski, a postdoctoral scholar in civil and environmental engineering at Stanford. "Our battery is a major step toward practically capturing that energy without membranes, moving parts or energy input."

Dubrawski works in the lab of study co-author Craig Criddle, a professor of civil and environmental engineering known for interdisciplinary field projects of energy-efficient technologies. The idea of developing a battery that taps into salt gradients originated with study coauthors Yi Cui, a professor of materials science and engineering, and Mauro Pasta, a postdoctoral scholar in materials science and engineering at the time of the research. Applying that concept to coastal wastewater treatment plants was Criddle's twist, born of his long experience developing technologies for wastewater treatment.

The researchers tested a prototype of the battery, monitoring its energy production while flushing it with alternating hourly exchanges of wastewater effluent from the Palo Alto Regional Water Quality Control Plant and seawater collected nearby from Half Moon Bay. Over 180 cycles, battery materials maintained 97 percent effectiveness in capturing the salinity gradient energy.

The technology could work any place where fresh and saltwater intermix, but wastewater treatment plants offer a particularly valuable case study. Wastewater treatment is energy-intensive, accounting for about three percent of the total U.S. electrical load. The process - essential to community health - is also vulnerable to power grid shutdowns. Making wastewater treatment plants energy independent would not only cut electricity use and emissions but also make them immune to blackouts - a major advantage in places such as California, where recent wildfires have led to large-scale outages.

Every cubic meter of freshwater that mixes with seawater produces about .65 kilowatt-hours of energy - enough to power the average American house for about 30 minutes. Globally, the theoretically recoverable energy from coastal wastewater treatment plants is about 18 gigawatts - enough to power more than 1,700 homes for a year.

The Stanford group's battery isn't the first technology to succeed in capturing blue energy, but it's the first to use battery electrochemistry instead of pressure or membranes. If it works at scale, the technology would offer a more simple, robust and cost-effective solution.

The process first releases sodium and chloride ions from the battery electrodes into the solution, making the current flow from one electrode to the other. Then, a rapid exchange of wastewater effluent with seawater leads the electrode to reincorporate sodium and chloride ions and reverse the current flow. Energy is recovered during both the freshwater and seawater flushes, with no upfront energy investment and no need for charging. This means that the battery is constantly discharging and recharging without needing any input of energy.

While lab tests showed power output is still low per electrode area, the battery's scale-up potential is considered more feasible than previous technologies due to its small footprint, simplicity, constant energy creation and lack of membranes or instruments to control charge and voltage. The electrodes are made with Prussian Blue, a material widely used as a pigment and medicine, that costs less than $1 a kilogram, and polypyrrole, a material used experimentally in batteries and other devices, which sells for less than $3 a kilogram in bulk.

There's also little need for backup batteries, as the materials are relatively robust, a polyvinyl alcohol and sulfosuccinic acid coating protects the electrodes from corrosion and there are no moving parts involved. If scaled up, the technology could provide adequate voltage and current for any coastal treatment plant. Surplus power production could even be diverted to a nearby industrial operation, such as a desalination plant.

"It is a scientifically elegant solution to a complex problem," Dubrawski said. "It needs to be tested at scale, and it doesn't address the challenge of tapping blue energy at the global scale - rivers running into the ocean - but it is a good starting point that could spur these advances."

To assess the battery's full potential in municipal wastewater plants, the researchers are working on a scaled version to see how the system functions with multiple batteries working simultaneously.