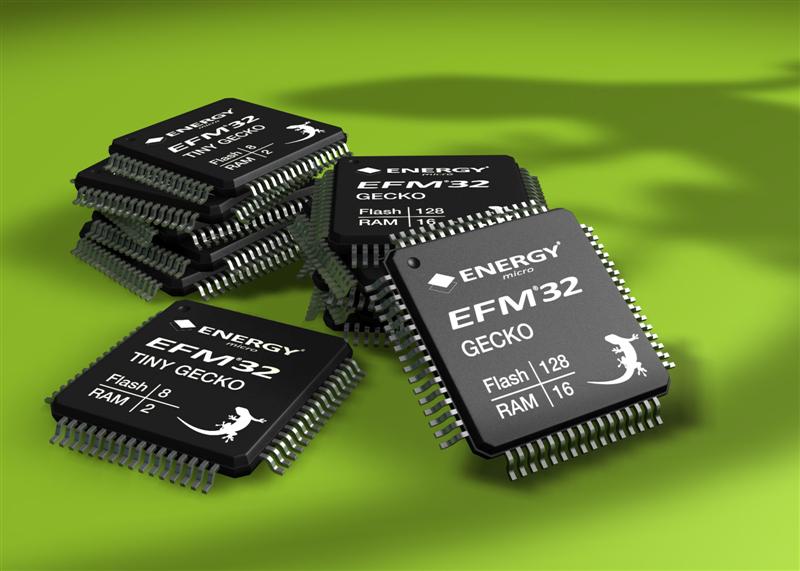 Energy Micro, the energy friendly microcontroller company, has announced availability of its EFM32 Gecko and Tiny Gecko product lines in a QFP64 package. The new 64-pin devices are particularly popular in the growing smart metering market, in addition to energy sensitive applications like building automation, security systems and portable health and fitness equipment. The introduction of the larger I/O count package adds 12 new product variants to the company's ARM® Cortex(TM)-M3 based microcontroller portfolio. The EFM32G232, EFM32G842, EFM32TG232 and EFM32TG842, which are available in various configurations of Flash memory ranging from 8 to 128 KB and RAM from 2 to 16 KB, offer the same energy saving Gecko technology as other package options in the EFM32 MCU range. In application benchmark tests, this low current performance, combined with a wake-up time of 2μs has enabled the EFM32 microcontrollers to extend battery cell life by a factor of at least four. Designed to significantly reduce current consumption, the EFM32 Gecko and Tiny Gecko microcontrollers operate in active mode typically 160μA per MHz executing code from Flash, 900nA in deep sleep mode and 20nA in shut off mode. The EFM32 Tiny Gecko family now also features the LESENSE low energy sensor interface, which enables autonomous monitoring of up to 16 external sensors in the microcontroller's sub microamp Deep Sleep mode. Andreas Koller, VP of World-Wide Sales and Marketing at Energy Micro said, "We have responded to the needs of our customers, and the introduction of the new QFP64 devices give engineers even more choices for applications where energy efficient design and proven packages are critical." EFM32 Gecko and Tiny Gecko microcontrollers in QFP64 are available now and pricing starts at $1.49 each in 100k quantities. Technical data is available via Simplicity Studio, Energy Micro's new online software console, at www.energymicro.com/software/simplicity-studio