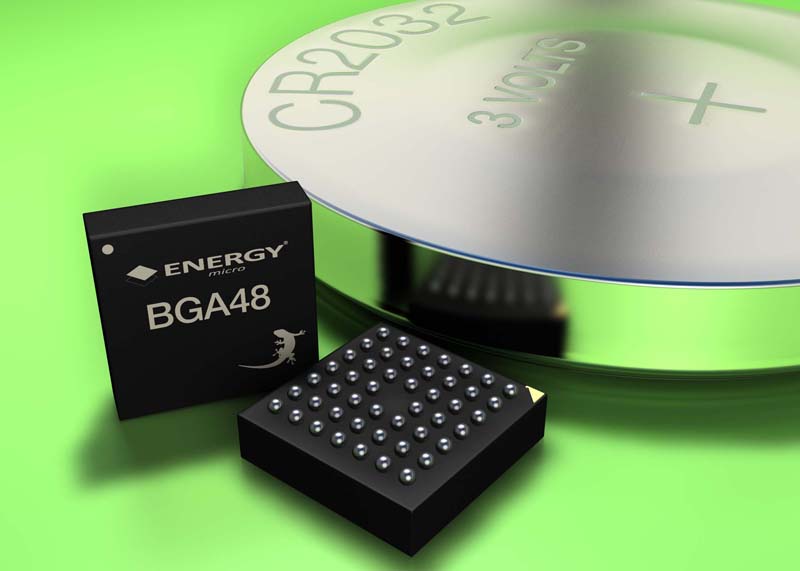 Energy Micro, the energy friendly microcontroller and radio company, today announced that it has extended its EFM32 Gecko range of microcontrollers with the addition of products supplied in a very thin, fine-pitch BGA48 packaging. The new Tiny Gecko devices require a current of just 150μA/MHz when active. Based on the ARM® Cortex™-M3 processor, they suit applications with extreme space constraints, such as wireless sensing nodes, home automation systems and portable health and fitness products. Despite their exceptionally small size (4mm x 4mm x 1mm high), the VFBGA48 Tiny Gecko devices include all of the energy friendly peripherals for which the Gecko family is noted including the LESENSE low-energy sensor interface, and the company's low-power LCD driver technology. "By offering Gecko variants in even smaller packages, we fuel the trend towards installing intelligence at the sensor node itself," said Andreas Koller, VP Worldwide Sales and Marketing, Energy Micro. "These new Gecko devices offer designers an ultra-small solution with no compromise in terms of performance, and the same rich peripheral set that has made our existing Gecko range so successful." The LESENSE function block, a generic low energy sensor interface, enables monitoring of a mix of up to 16 capacitive, inductive or resistive sensors independently of the processor core. This allows designers to maintain basic functionality while keeping the processor in sleep or shut-off mode for as long as possible. The Cortex-M3 Tiny Gecko microcontroller runs at a clock speed of up to 32MHz. Equipped with memory configurations up to 32KB of Flash memory and 4KB of RAM, the new RoHS-compliant VFBGA48 devices will be available in sample quantities in Q3 2012, with pricing starting at $1.82 at 100K devices. Energy Micro's Gecko microcontroller portfolio consists of more than 240 variants based on the ARM Cortex-M processor cores, and includes Gecko Technology benchmarked to consume just a quarter of the energy of competing 8-bit, 16-bit and 32-bit MCUs. www.energymicro.com/