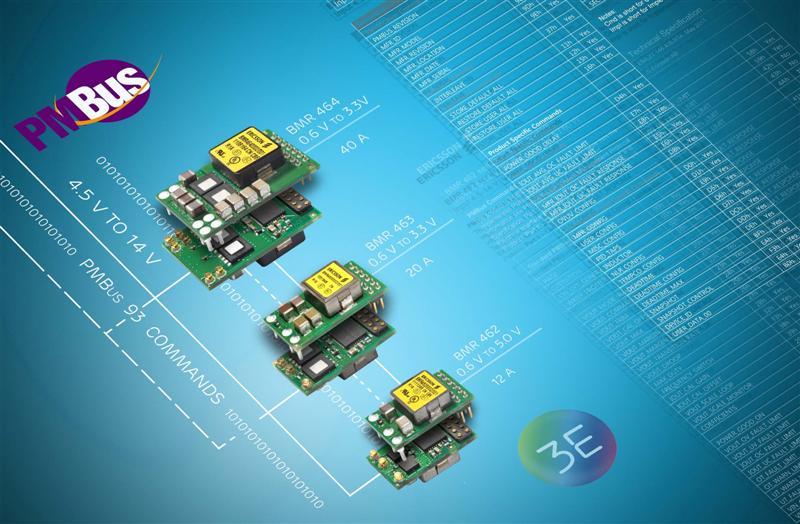 Based on digital-core controllers, the Ericsson 3E* second generation of voltage regulators, the 12A BMR462, the 20A BMR463 and the 40A BMR464, now support 93 PMBus commands, allowing designers to monitor and control energy distribution from system level to board level. The PMBus digital interface enables the end-user to configure many aspects of device operation and to monitor input and output voltages, output current and device temperature. For compatibility, flexibility and versatility, the BMR462, BMR463 and BMR464 can be used with any standard two-wire I2C or SMBus host device. Furthermore, the module is compatible with PMBus version 1.1 and includes a SALERT line to help mitigate bandwidth limitations related to continuous fault monitoring. It is possible to monitor a wide variety of parameters through the PMBus interface. Fault conditions can be monitored using the SALERT pin, which is asserted when any combination of pre-configured fault or warning conditions occur. It is also possible to continuously monitor one or more of the power conversion parameters including, but not limited to, input voltage, output voltage, output current, internal junction temperature, switching frequency and duty cycle. Integrating a resident memory, the Ericsson 3E voltage regulators also enable systems' architects to snapshot events at a single point-of-load (POL) level. The information and parameters captured during a snapshot are then stored in Flash memory readable via the PMBus. For example, specific limits or fault conditions can be set to trigger an action when a given threshold level is reached or exceeded. The automatic response could be to send warning or 'adjust' command to the board-power-manager (BPM), or creating a mandatory command to shut down the module. The number of commands supported by the BMR462, BMR463 and BMR464, facilitate optimization of power-module configurations to varying load conditions. This minimizes power losses and reduces energy consumption by sending a command to automatically adjust the output voltage as the load changes; a lower voltage is optimal for low-load demand and a higher voltage as the load increases. It is also possible to shut down selected modules and reactivate them on-demand. "Since Ericsson introduced its first digitally controlled voltage regulator November 2008, we have seen considerable increase of demand from system architects to optimize energy management to a very high degree. They are also motivated by the possibilities offered by PMBus and demand additional features that make it possible to fully integrate voltage regulators into their digital power management architecture," said Patrick Le Fèvre, marketing and communication director of Ericsson Power Modules. "That is exactly what our second generation of digital POL is now offering, extending possibilities to an unprecedented level, saving cost, time-to-market and energy." Joining PMBus in December 2005, Ericsson Power Modules was one of the early adopters of this protocol and the first company to launch digitally controlled POL (point-of-load) regulators based on a digital core controller. Through close cooperation with board and systems designers, the company was also the first to release a 21st-century power architecture that can be fully integrated into the rest of the digital chain of processors and associated components. www.ericsson.com/powermodules