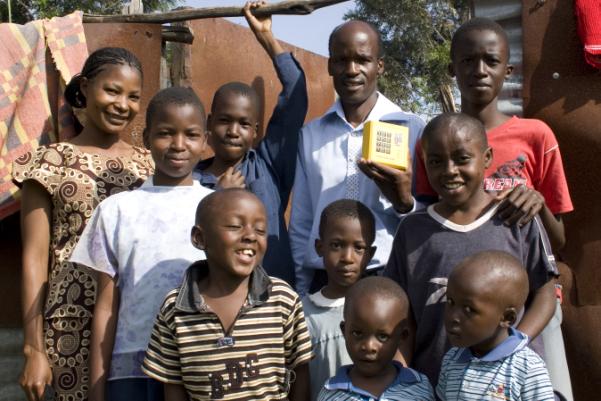 ESCATEC, a leading EMS innovator, has helped commercialize a novel design of solar power charging station for its client Azuri Technologies. The Indigo™ unit has a solar panel, two LED lamps and control unit with a charging point for a mobile phone. It has already won several major awards and is now in mass production in ESCATEC's Malaysian production facilities. In rural Africa, the typical source of light is a kerosene lamp, which is not only unhealthy and dangerous, but also expensive. It is not uncommon for people to be spending $2 a week on kerosene and a further $1 on mobile phone charging. The challenge until now has been the upfront capital expense of a solar lighting system. Azuri has solved this by creating a Pay As You Go business model for users. Customers pay a one-off install fee of around $10 and then purchase a weekly scratchcard for around $1.50, cutting their weekly energy spend by as much as 50% and benefiting from better quality illumination. The customer tops up their system with an Indigo scratchcard just as they would their mobile phone. A one-time top-up code is texted back and then input into the device's keypad, enabling it to be used as much as required for a week. After around 18 months, the unit is completely paid for and can be permanently unlocked. "With Indigo we get permanent light and phone charging, don't have to look for kerosene, and we're saving $5 per week. So I'm very happy for that" - Moses, Indigo customer in Kenya. "The vast distances and costs of installing traditional infrastructure in Africa have meant that mobile telephones have leapfrogged over the stage of landlines," explained Nigel Preston, VP Product Management at Azuri. "Indigo provides the same leap for electricity over hardwired mains, using a mobile, solar powered unit. 600 million Africans currently lack mains electricity so, whilst almost everyone has a mobile phone, they typically have to travel several kilometers to pay to get it charged. We needed a product that could withstand the extremes of temperature, be rugged and reliable, but, above all else, it had to be affordable. The build cost had to be as low as possible without compromising the quality, which is why we went to ESCATEC with our product. They offer a rare combination of top notch design and development backed up with a high volume manufacturing capability. Doing both means that they really do understand how to design for manufacture. They were able to view the entire project holistically, turning our prototype design into a commercial device, through component sourcing to mass production." Gerhard Klauser, General Manager at ESCATEC Switzerland explained, "Our location in Switzerland enables us to have a close working relationship with Azuri who are based in the UK. Face to face meetings are easy to arrange so they were able to be really 'hands on' at every stage as we optimized their design for manufacture. The initial low volume production run was done in our facility here and then transferred to our factory in Malaysia for volume runs. As we deliberately use the same production equipment, this is a simple and very reliable transfer process that we have done many times for customers. This gives them a gateway to the high volume, low labor cost benefits of production in Asia but with a local contact to ensure that everything always runs smoothly." Nigel Preston, added, "What really impressed me about ESCATEC was their professionalism in dealing with the complexities of design and production, and in solving the numerous challenges that were put in front of them before they became issues for us." Reliable, quality illumination can change people lives. Children can study at home and their grades improve. Shops can stay open past dusk. People can work in the evening to earn more money and improve the quality of their lives. Having a reliable source of electricity is similarly transformational - especially as mobile phones are now a vital tool for communications, information, entertainment and banking. "Indigo is a simple and effective way to transform the life of millions of people and we are very proud to be making this happen," concluded Nigel. ESCATEC