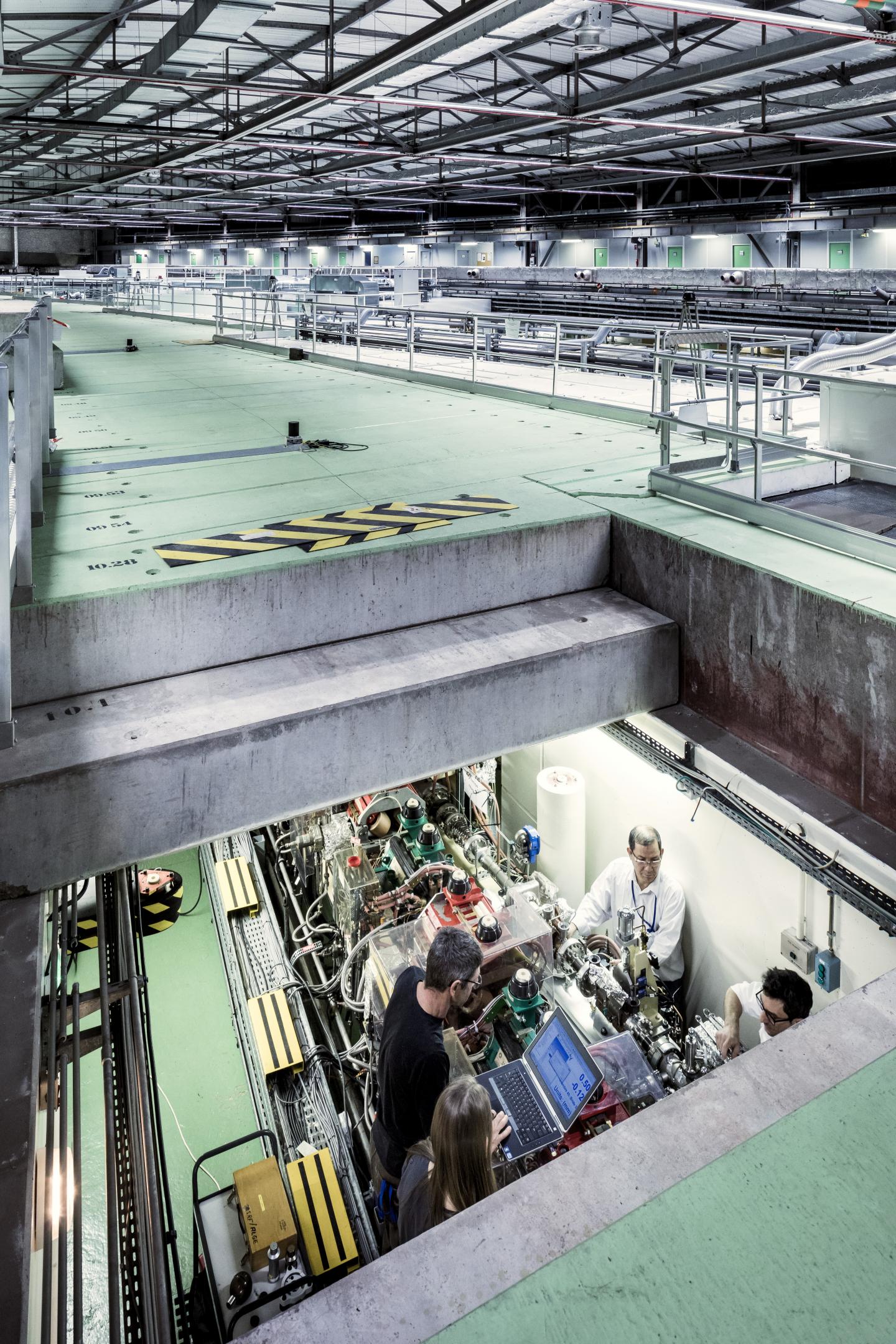 This is a picture of the ESRF's third generation storage ring to be dismantled.

Grenoble - "No beam for a while. Restart in about 20 months". Early this morning, operators of the ESRF Control room turned off the beam, ending 26 years of very successful operation of the European Synchrotron, the world's most powerful synchrotron light source. 2018, is a key date in the history of the ESRF. Thirty years after the signature of the ESRF Convention, the ESRF's shining light has been put in standby mode. The ESRF now enters a 20-month shutdown and will dismantle its flagship storage ring to make way for a revolutionary X-ray source, an Extremely Brilliant Source (EBS), open for users in 2020.

"Today, the EBS project is officially entering a new stage, which is the fruit of our hard work of the last four years. Our imagination, engineering design, quality control and assembly, guided by strict project management, has made it possible to start the swap in our tunnel between the old and the new storage ring. This is possible thanks to the great capability of ESRF staff", said Francesco Sette, Director General of the ESRF.

Thirty years ago the European Synchrotron Radiation Facility (ESRF) in Grenoble, France, made history as the world's first third-generation synchrotron light source, producing X-rays 100 billion times brighter than the X-rays used in hospital radiographic equipment and providing unrivalled opportunities for scientists in the exploration of materials and living matter. For 30 years, the ESRF has broken records for its scientific output (over 32 000 publications, 5 000 users per year, four Nobel prize laureates) as well as for the brilliance and stability of its X-ray beams. Today, with EBS, the ESRF continues to lead the way. EBS is a 150M€ project, funded by the 22 partner countries of the ESRF. With EBS, the ESRF is building an ambitious new standard for synchrotron storage rings - the world's first high-energy fourth-generation storage ring - with unique X-ray performances increased by a factor 100 compared to current storage ring and third generation standards.

"With EBS, our quest for higher brilliance and coherence continues. The expertise that we have at the ESRF is unique and allows us to attempt a project of this scale. Today all the ESRF teams are mobilised to make this vision a reality in 2020", said Pantaleo Raimondi, EBS Project Leader and Director of the Accelerator & Source Division.

EBS represents an enormous challenge, not only in pushing science and technology to its known limits, but also on a human and logistical scale. Over the next 20 months, the ESRF will put in stand-by mode its scientific user programme, dismantle the current 844m-circumference storage ring and install the new EBS lattice within the existing infrastructure. The new source will be achieved by replacing the existing storage ring, a double-bend achromat (DBA) magnet sequence, with an innovative and award-winning hybrid multi-bend achromat (HMBA) design, developed at the ESRF.

Teams will have eight months to install 128 girders, supporting over 10 000 components precision-aligned to within half the width of a human hair, in the tunnel.

EBS relies on a number of key innovative technologies. This first-of-a-kind new storage ring combines an increase in the number of bending magnets with seven, as opposed to two, bending magnets per cell and optics that maximise the stable phase space volume available for the electron beam, reducing the horizontal emittance. The result is a tighter packing of electrons, increasing the brightness and degree of coherence of the X-rays by two orders of magnitude. This gives the EBS beams laser-like properties approaching those of X-ray free-electron lasers (XFELs) such as the European XFEL, and makes EBS the first high-energy fourth- generation synchrotron light source. EBS is also using permanent magnet technology for the 128 dipole magnets, achieving a significant reduction in electricity consumption. In the new EBS storage ring, 1 000 innovative magnets -nearly twice as many as in the previous storage ring- will be squeezed into the same space inside the accelerator tunnel.

"Audacity and innovation underpin the history of the ESRF. With the construction of a brand-new storage ring, together with the most advanced portfolio of new beamlines, EBS will enable scientists to bring X-ray science into research domains and applications that could not have been imagined a few years ago," said Francesco Sette.

The new EBS storage ring will be complemented by the construction of four brand-new flagship beamlines and the full refurbishment of existing beamlines; an ambitious instrumentation programme with a focus on high-performance detectors; and cutting-edge experimental control and data analysis tools, all designed to exploit the enhanced performance of the new source.

The new EBS beamlines will make it possible to probe complex materials at the atomic level in greater detail, with higher quality, and much faster. These new beamlines will help scientists to address major challenges facing our society, including the development of the next generation of drugs, biomaterials and sustainable materials, and to provide deep insights into the complex mechanisms governing living organisms. They will help elucidate our recent and ancient past, as manifested in historical artefacts and fossils. What's more, they will provide unique opportunities for applied and innovation-driven research.

EBS will be a powerful new instrument for the international scientific community, opening the door to new experiments in X-ray science. By pushing the frontiers of accelerator technology, the EBS lattice has inspired other major light sources around the world. EBS reinforces what has always been, and will always be, the ESRF's mission: to pioneer synchrotron science.