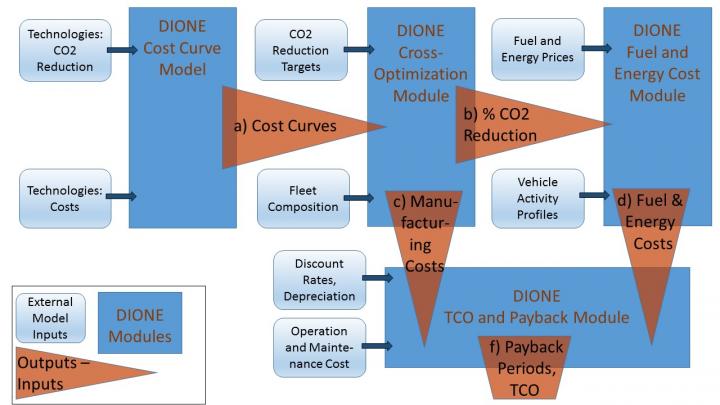 This is a representation of how the DIONE module works.

The European Commission has introduced a package of measures seeking to reconcile the ambition of world-leading environmental standards with increasing the competitiveness of our car manufacturing industry to secure jobs and growth.

The 2nd Mobility Package is also designed to offer a new deal for consumers, helping to restore citizens' trust and ensure that future mobility is clean and affordable to all. Evidence provided by the JRC - on new technologies, governance structures and the impact of policy options - formed the basis of the final package.

Protecting our planet and defining the next generation of emissions targets

The JRC's DIONE modelling software directly supports the assessment of policy options by calculating their economic impact. Policy scenarios have been analysed with regard to costs for end-users and manufacturers, helping the Commission to understand the full range of options and propose a target that is ambitious and realistic.

The DIONE software modules include: the cost curve model, which provides cost estimates associated with reaching a given CO2 reduction; a cross-optimisation module which then identifies cost-optimal strategies to reach these targets and applies these to different categories of manufacturers; a module calculating the fuel and energy cost for optimised vehicles in each manufacturer category; and a module calculating the final cost to the end consumer by inputting factors such as discount rates, depreciation, operation and maintenance costs.

The JRC report 'From NEDC to WLTP: effect on the type-approval CO2 emissions of light-duty vehicles' details a car emissions simulator (PyCSIS) used to assess the new World-wide harmonised Light duty Test Cycle (WLTC), designed to replace the old New European Driving Cycle (NEDC) which has been criticised for producing large differences between declared values and real-world emissions. The results of the report support the idea that the new testing method can help to close the gap between declared values and real-world emissions.

The PyCSIS model is an evolution of CO2MPAS, the tool developed by the JRC to be used during the emission type-approval of light duty vehicles in Europe in the period 2017-2020.

The JRC's report on 'Characterisation of real-world CO2 variability and implications for future policy instruments' goes a step further, assessing the uncertainty and variability in vehicle fuel consumption using data from vehicles driven in different conditions and by different drivers. The study finds that the fuel consumption of the selected vehicle had a significant variation over different operating conditions - ranging from 5 to 13 l/100km in 95% of cases.

The results suggest the need to enhance the current lab-based certification procedure by coupling it with additional instruments, such as a fleet-wide fuel consumption monitoring system and advanced tools for customized vehicle fuel-consumption information also empowering citizens to provide feedback from their daily vehicle use. The JRC's green-driving tool is a first step in this direction.

CO2MPAS, Dione, Green-Driving, Pycsis, together with VECTO - the tool introduced in the certification of fuel consumption from heavy duty vehicles -form a pool of tools developed by the JRC in recent years to support the development of ambitious, robust and scientifically sound legislations aimed at contributing to the decarbonisation of the road transport sector.

Demand for lithium-ion batteries suitable for application in e-mobility and in stationary energy storage is likely to increase. JRC researchers analysed EU competitiveness in advanced Li-ion batteries for E-mobility and stationary storage applications, identifying the investment required to 'pull down costs along the learning curve' and reach a target battery pack cost that will work both for citizens and industry.

Assuming a 1:1 conversion $:€, a 2030 battery pack cost target of 75 €/kWh (specified in the Commission's SET plan) requires a cumulative financial expenditure of around 46 B€, corresponding to ca. 390 GWh cumulative production volume by that time - roughly equivalent to 6.5 million electric cars with a standard 60kWh battery.

In preparing the groundwork for this, the JRC conducted a thorough analysis of the coherence of Member States' own assessments of the current state and future development of the alternative fuels market in the transport sector, the ambition of national targets and objectives and the measures proposed to reach them.

This is reflected in the Commission SWD ("Detailed Assessment of the National Policy Frameworks") to the Communication "Towards the broadest use of alternative fuels - an Action Plan on Alternative Fuels Infrastructure, including the report on the implementation of Directive 2014/94/EU", also adopted today.