Exotic State of Matter: An Atom Full of Atoms

Scientists from TU Wien (Vienna, Austria) and the USA have provided proof for a new state of matter: an electron orbits a nucleus at a great distance, while many other atoms are bound inside the orbit. 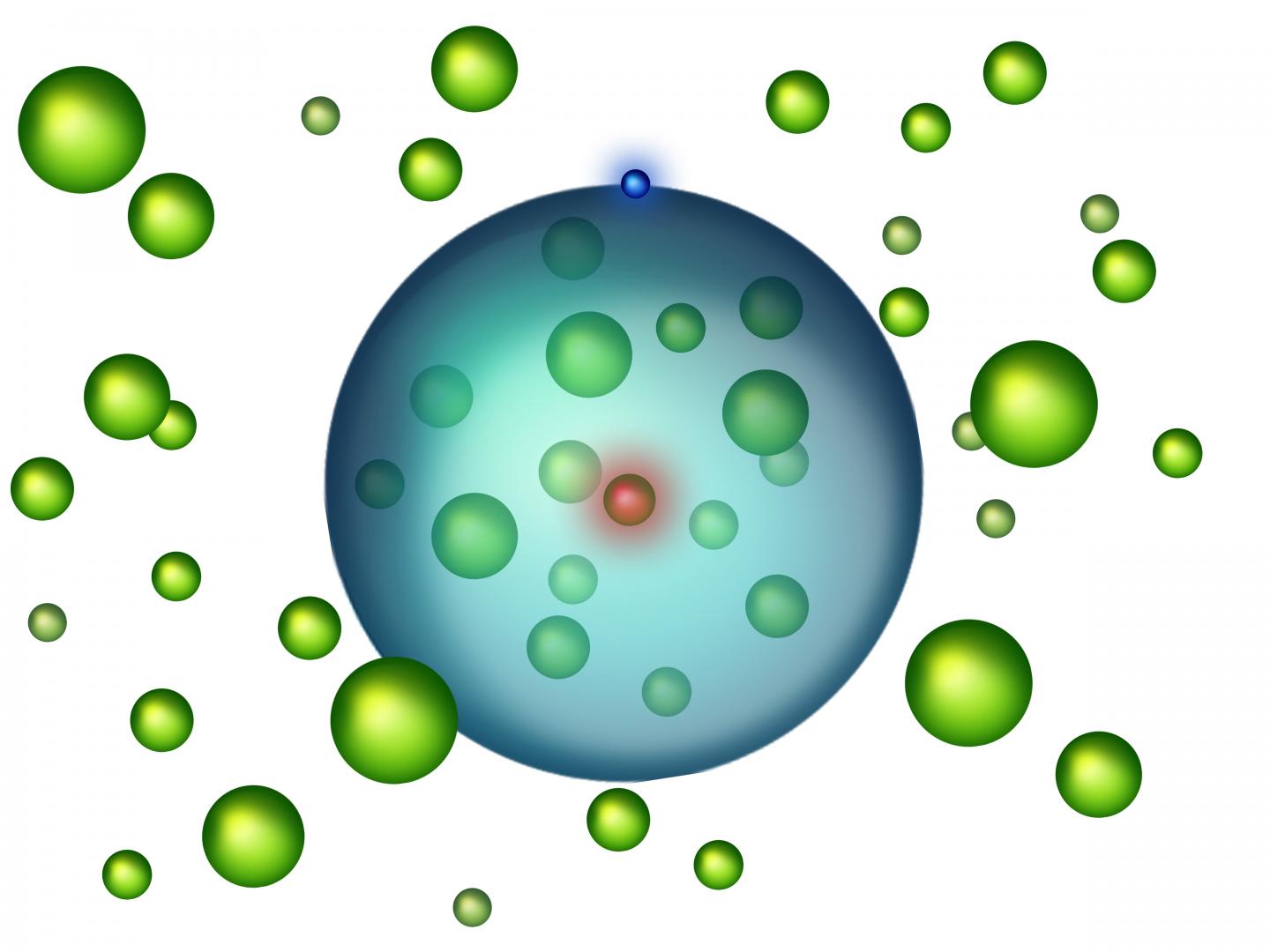 The electron (blue) orbits the nucleus (red) -- and its orbit encloses many other atoms of the Bose-Einstein-condensate (green).

What is inside an atom, between the nucleus and the electron? Usually there is nothing, but why could there not be other particles too? If the electron orbits the nucleus at a great distance, there is plenty of space in between for other atoms. A "giant atom" can be created, filled with ordinary atoms. All these atoms form a weak bond, creating a new, exotic state of matter at cold temperatures, referred to as "Rydberg polarons".

A team of researchers has now presented this state of matter in the journal Physical Review Letters. The theoretical work was done at TU Wien (Vienna) and Harvard University, the experiment was performed at Rice University in Houston (Texas).

Two very special fields of atomic physics, which can only be studied at extreme conditions, have been combined in this research project: Bose-Einstein condensates and Rydberg atoms. A Bose-Einstein condensate is a state of matter created by atoms at ultracold temperatures, close to absolute zero. Rydberg atoms are atoms, in which one single electron is lifted into a highly excited state and orbits the nucleus at a very large distance.

"The average distance between the electron and its nucleus can be as large as several hundred nanometres - that is more than a thousand times the radius of a hydrogen atom", says Professor Joachim Burgdörfer. Together with Prof. Shuhei Yoshida (both TU Wien, Vienna), he has been studying the properties of such Rydberg atoms for years. The idea for the new research project was developed in their long-standing cooperation with Rice University in Houston.

First, a Bose-Einstein condensate was created with strontium atoms. Using a laser, energy was transferred to one of these atoms, turning it into a Rydberg atom with a huge atomic radius. The perplexing thing about this atom: the radius of the orbit, on which the electron moves around the nucleus, is much larger than the typical distance between two atoms in the condensate. Therefore the electron does not only orbit its own atomic nucleus, numerous other atoms lie inside its orbit too. Depending on the radius of the Rydberg atom and the density of the Bose-Einstein condensate, as many as 170 additional strontium atoms may be enclosed by the huge electronic orbit.

Neutral Atoms do not Disturb the Electron's Orbit

These atoms hardly have an influence on this Rydberg electron's path. "The atoms do not carry any electric charge, therefore they only exert a minimal force on the electron", says Shuhei Yoshida. But to a very small degree, the electron still feels the presence of the neutral atoms along its path. It is scattered at the neutral atoms, but only very slightly, without ever leaving its orbit. The quantum physics of slow electrons permits this kind of scattering, which does not transfer the electron into a different state.

As computer simulations show, this comparatively weak kind of interaction decreases the total energy of the system, and so a bond between the Rydberg atom and the other atoms inside the electronic orbit is created. "It is a highly unusual situation", says Shuhei Yoshida. "Normally, we are dealing with charged nuclei, binding electrons around them. Here, we have an electron, binding neutral atoms."

This bond is much weaker than the bond between atoms in a crystal. Therefore, this exotic state of matter, called Rydberg polarons, can only be detected at very low temperatures. If the particles were moving any faster, the bond would break. "For us, this new, weakly bound state of matter is an exciting new possibility of investigating the physics of ultracold atoms", says Joachim Burgdörfer. "That way one can probe the properties of a Bose-Einstein condensate on very small scales with very high precision."