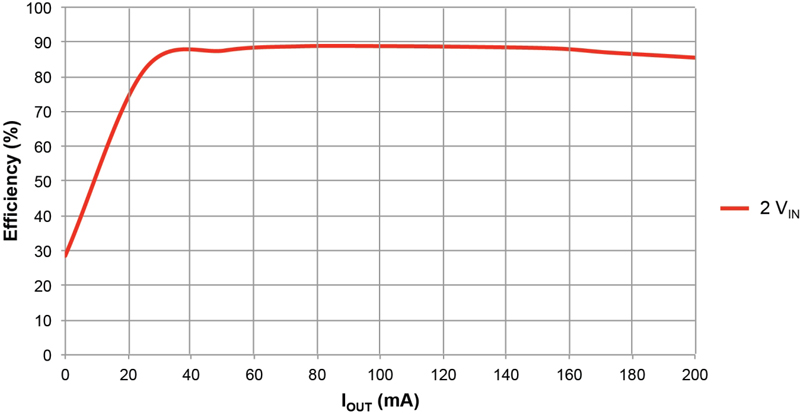 The measured efficiency of the total circuit, step-down converter plus auxiliary charge pump and linear regulator, running at the minimum input voltage of 2 V and 1-mA load on the 2.5-V output, is fairly constant at 88 percent (figure 2). System efficiency this high prolongs battery life. Furthermore, the linear regulator cleans up the switching noise of the auxiliary charge pump circuit, conditioning it to power the sensitive analog reference voltage or sensor. Of the three power-converter topologies we've examined, the auxiliary charge pump is the lowest cost and provides sufficient noise performance to power a sensitive analog circuit in an insulin pump. The efficiency of the auxiliary charge pump circuit by itself is theoretically poor, but considering that it only provides 3.5% of the total output power, it has a negligible impact on the system's battery life. Since it lacks intricate and relatively costly switching semiconductor devices and requires few external components, it is a viable low-cost power supply for cost-sensitive systems. Texas Instruments