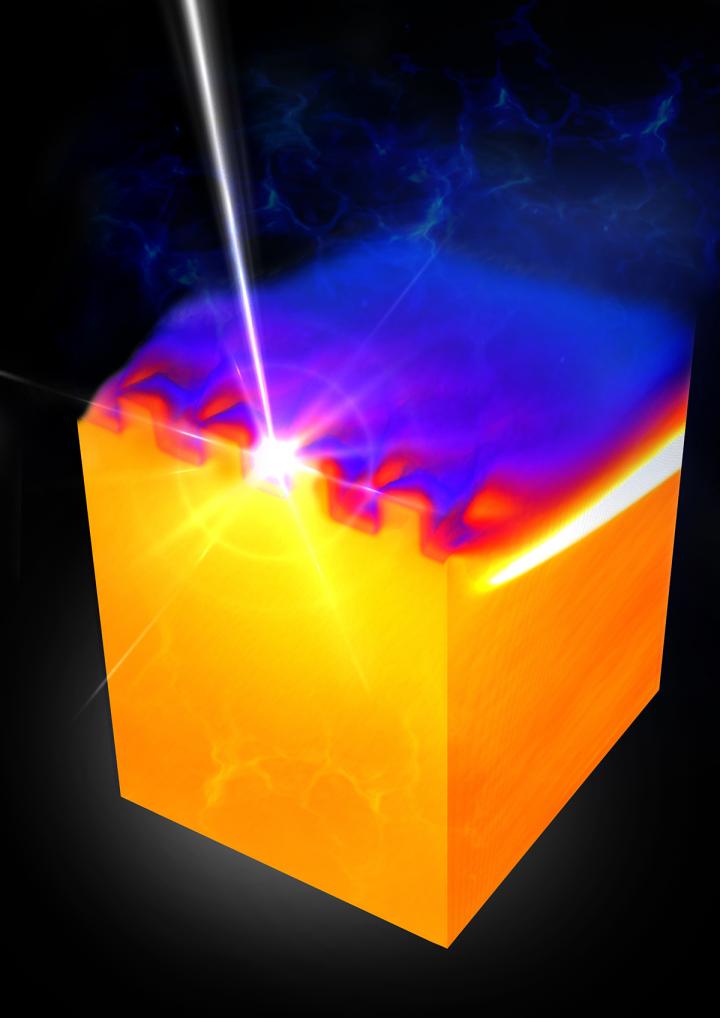 With the aid of the powerful X-ray free-electron laser at SLAC in California, HZDR researchers were able to investigate the plasma processes on the small scales of a few nanometers and femtoseconds on which the turbulent laser interaction with the particles to be accelerated takes place.

When light pulses from an extremely powerful laser system are fired onto material samples, the electric field of the light rips the electrons off the atomic nuclei. For fractions of a second, a plasma is created. The electrons couple with the laser light in the process, thereby almost reaching the speed of light. When flying out of the material sample, they pull the atomic cores (ions) behind them. In order to experimentally investigate this complex acceleration process, researchers from the German research center Helmholtz-Zentrum Dresden-Rossendorf (HZDR) have developed a novel type of diagnostics for innovative laser-based particle accelerators. Their results are now published in the journal Physical Review X.

"Our goal is an ultra-compact accelerator for ion therapy, i.e. cancer irradiation with charged particles," says physicist Dr. Thomas Kluge from the HZDR. Besides clinics, the new accelerator technology could also benefit universities and research institutions. However, much research and development work is needed before the technology is ready for use. The DRACO laser at the Helmholtz Center in Dresden currently achieves energies of around 50 megaelectronvolts. However, 200 to 250 megaelectronvolts are required to irradiate a tumor with protons.

Thanks to its ultrashort pulses in the range of a few femtoseconds - a time during which a light beam crosses just a fraction of a human hair - the DRACO laser achieves a power of almost one petawatt. This corresponds to one hundred times the average electrical power generated worldwide.

"We need to understand the individual processes involved in accelerating electrons and ions much better," stresses Kluge. Together with colleagues from Dresden, Hamburg, Jena, Siegen and the USA, the HZDR researchers have now succeeded for the first time in observing these extremely fast processes virtually in real time at the SLAC National Accelerator Laboratory of Stanford University in the USA.

To achieve this feat, the scientists need two special lasers at the same time: The high-intensity laser at SLAC has a power of around 40 terawatts - that is, about 25 times weaker than DRACO. When striking the material sample (target), it ignites the plasma. The second laser is an X-ray laser, which is used to precisely record the individual processes: from the ionization of the particles in the target and the expansion of the plasma, to the plasma oscillations and instabilities that occur when the electrons are heated to several million degrees Celsius, up to the efficient acceleration of the electrons and ions.

"Using the small-angle scattering method, we have realized measurements in the femtosecond range and on scales ranging from a few nanometers to several hundred nanometers," says HZDR doctoral student Melanie Rödel, who played a leading role in the experiment. Several years of work were necessary to access these areas and obtain clean signals on the scattering images of the X-ray laser.

"The new diagnostics for laser-based accelerators has excellently confirmed our expectations regarding its spatial and temporal resolution. We have thus paved the way for the direct observation of plasma-physical processes in real time," says Dr. Josefine Metzkes-Ng, head of one of the participating junior research groups at the HZDR's Institute of Radiation Physics.

Starting in 2019, the Helmholtz International Beamline for Extreme Fields (HIBEF), which the HZDR is currently setting up as part of an international collaboration at the world's strongest X-ray laser, the European XFEL near Hamburg in Germany, will provide a next-generation experimental setup with a significantly more powerful short-pulse laser.

For the physicists involved in the experiments, a specific detail from their calculations made for a particular eye-opener. "Our targets were specially developed at the HZDR Ion Beam Center to have a kind of tiny finger structure on their surface. The laser beam scatters on this structure, resulting in a particularly large number of electrons from the corners being accelerated and crossing each other," explains Thomas Kluge.

The fact that this detail predicted by the calculations could be discovered in the experiment, which after all lasts only ten femtoseconds, raises hopes - for instance, to be able to observe further spontaneous pattern formations (instabilities). These can be caused, for example, by the oscillation of the electrons in the electromagnetic field of the laser.

The researchers are interested in identifying instabilities that disrupt the acceleration of the electrons and ions - with the aim of avoiding them by selecting suitable targets, for example. "However, we also know from our simulations that instabilities can even increase the efficiency of the acceleration process," explains the physicist. "In our simulations, we have identified the Raleigh-Taylor instability, among others." This causes the optical laser to transfer more energy into the plasma it generates. Such 'positive' instabilities could thus be an important adjusting screw to optimize the process of ion acceleration mediated by the electrons.

The laser scientists expect the new HIBEF facility to provide many more insights into plasma acceleration. This 'extreme laboratory' of the HZDR will provide the High Energy Density Science (HED) instrument at the European XFEL with high-power lasers. "The X-ray pulse from the European XFEL, with which we will be measuring the processes in the plasma, is very short. We are also planning to use additional diagnostic tools so that we can optimally study the plasma oscillations, for example, see further instabilities in the experiment, and also generate them in a targeted manner," predicts Thomas Kluge. In this way, the HZDR researchers aim to move gradually closer to their goal of developing an ultra-compact laser accelerator for the proton therapy of cancer.

The most important in brief

Scientists from the German research center Helmholtz-Zentrum Dresden-Rossendorf (HZDR), together with colleagues from the European XFEL as well as from Siegen, Jena and the USA, have taken a decisive step towards the use of next-generation laser-based particle accelerators. With the aid of the powerful X-ray free-electron laser at SLAC in California, they were able to investigate the plasma processes for the first time on the small scales of a few nanometers and femtoseconds on which the turbulent laser interaction with the particles to be accelerated takes place. In the future, the processes could thus be optimized and the compact laser-based particle accelerators could be used, for example, for tumor irradiation using protons.