Feds Back Rice U. Study of Nanoscale Electrocatalysis 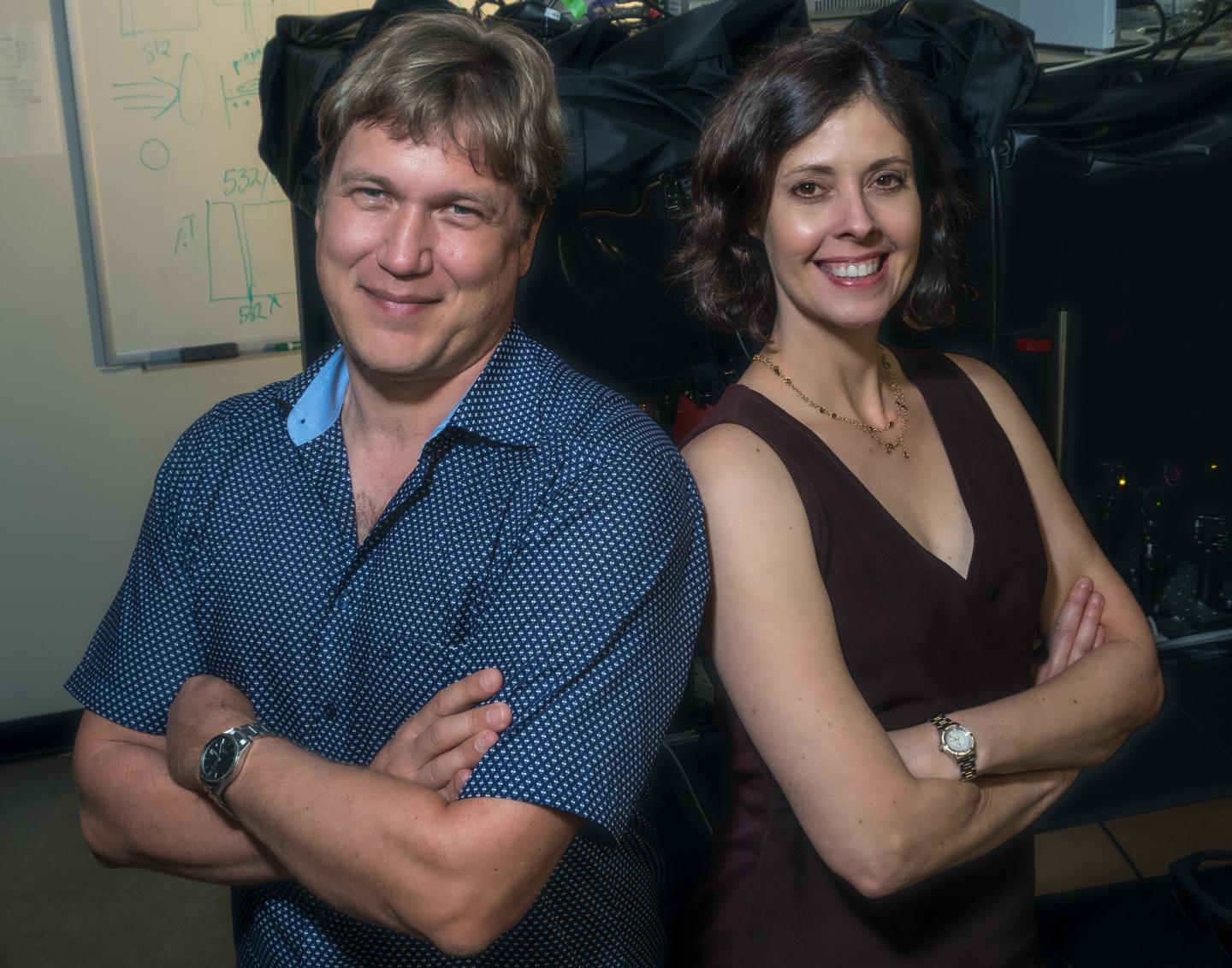 Rice University's Stephan Link and Christy Landes are both professors of chemistry and of electrical and computer engineering.

HOUSTON - The U.S. Department of Energy's Office of Basic Energy Sciences has awarded Rice University researchers $1.1 million to study single nanoparticles and their ability to act as electrocatalysts.

The Rice laboratories of Christy Landes and Stephan Link, both professors of chemistry and of electrical and computer engineering, received the three-year renewal of an earlier grant to develop and use single-particle spectroscopy techniques to understand how nanoparticles can be improved for use as electrocatalysts that facilitate chemical reactions.

They already know that single metallic nanoparticles are more efficient catalysts than they are in their bulk forms, due primarily to their high surface areas and unique surface chemistries. The particles they study are plasmonic; an input of energy, usually from a laser, triggers the oscillation of electrons that flow like ripples across their surfaces.

These can generate hot charge carriers, highly energetic electrons and holes that in turn can participate in catalytic charge transfer with surface molecules. The researchers want to know how hot carriers are influenced by the shape and stability of nanoparticles as well as how they interact with their environments, all while applying an electrochemical potential.

They hope that knowledge will allow them to fine-tune nanoscale electrocatalysts in future applications.

Landes said many industrial processes are aided by catalysts but still require high temperatures and pressures. "If we can understand and control light-driven catalysis using otherwise nonreactive catalytic supports, it may be possible to use sunlight and dramatically decrease the cost to produce materials," she said.

Enantiomers are chiral molecules whose structures mirror each other but, like hands, cannot be superimposed upon each other. Opposing enantiomers can catalyze very different reactions even though they are chemically identical.

The Rice researchers said they are uniquely qualified to study nanoparticle electrocatalysis at molecular scales. Landes' lab has advanced the development of super-resolution microscopy, which allows scientists to image things smaller than the diffraction limit of light. Link specializes in single-particle spectroscopy to study plasmonic materials and the principles that govern their interactions with each other and their environments.

The grant comes just as Link, Landes and their Rice colleagues publish a massive review of the state of the art of plasmonic sensing and control of single-nanoparticle electrochemistry. The paper appears online in the journal Chem.

The paper and the proposal went hand in hand, Link said. As the researchers worked to acquire data for the Department of Energy pitch, they noted a need for an updated review of the field. "We hope the review will be helpful to other colleagues in the growing field of plasmonic photoelectrochemistry," he said.

The researchers plan to combine super-resolved, electro-generated chemiluminescence microscopy and voltammetry to analyze catalytic mechanisms via oxidation reactions in a model nanoscale system. They will also explore the plasmon-induced instability of electrocatalysts and locate the most active and stable sites within particles.