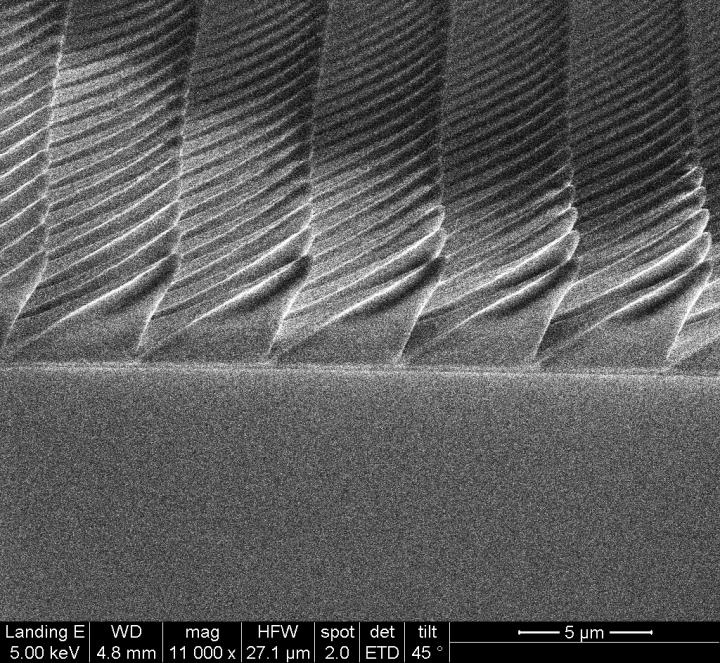 A new type of light-emitting diode lightbulb could one day light homes and reduce power bills, according to Penn State researchers who suggest that LEDs made with firefly-mimicking structures could improve efficiency.

"LED lightbulbs play a key role in clean energy," said Stuart (Shizhuo) Yin, professor of electrical engineering. "Overall commercial LED efficiency is currently only about 50 percent. One of the major concerns is how to improve the so-called light extraction efficiency of the LEDs. Our research focuses on how to get light out of the LED."

Fireflies and LEDs face similar challenges in releasing the light that they produce because the light can reflect backwards and is lost. One solution for LEDs is to texture the surface with microstructures -- microscopic projections -- that allow more light to escape. In most LEDs these projections are symmetrical, with identical slopes on each side.

Fireflies' lanterns also have these microstructures, but the researchers noticed that the microstructures on firefly lanterns were asymmetric -- the sides slanted at different angles, giving a lopsided appearance.

"Later I noticed not only do fireflies have these asymmetric microstructures on their lanterns, but a kind of glowing cockroach was also reported to have similar structures on their glowing spots," said Chang-Jiang Chen, doctoral student in electrical engineering and lead author in the study. "This is where I tried to go a little deeper into the study of light extraction efficiency using asymmetric structures."

Using asymmetrical pyramids to create microstructured surfaces, the team found that they could improve light extraction efficiency to around 90 percent. The findings were recently published online in Optik and will appear in the April print edition.

According to Yin, asymmetrical microstructures increase light extraction in two ways. First, the greater surface area of the asymmetric pyramids allows greater interaction of light with the surface, so that less light is trapped. Second, when light hits the two different slopes of the asymmetric pyramids there is a greater randomization effect of the reflections and light is given a second chance to escape.

The LED-based lighting market is growing rapidly as the demand for clean energy increases, and is estimated to reach $85 billion by 2024.

"Ten years ago, you go to Walmart or Lowes, LEDs are only a small portion (of their lighting stock)," said Yin. "Now, when people buy lightbulbs, most people buy LEDs."

LEDs are more environmentally friendly than traditional incandescent or fluorescent lightbulbs because they are longer-lasting and more energy efficient.

Two processes contribute to the overall efficiency of LEDs. The first is the production of light -- the quantum efficiency -- which is measured by how many electrons are converted to light when energy passes through the LED material. This part has already been optimized in commercial LEDs. The second process is getting the light out of the LED -- called the light extraction efficiency.

"The remaining things we can improve in quantum efficiency are limited," said Yin. "But there is a lot of space to further improve the light extraction efficiency."

In commercial LEDs, the textured surfaces are made on sapphire wafers. First, UV light is used to create a masked pattern on the sapphire surface that provides protection against chemicals. Then when chemicals are applied, they dissolve the sapphire around the pattern, creating the pyramid array.

"You can think about it this way, if I protect a circular area and at the same time attack the entire substrate, I should get a volcano-like structure," explained Chen.

In conventional LEDs, the production process usually produces symmetrical pyramids because of the orientation of the sapphire crystals. According to Chen, the team discovered that if they cut the block of sapphire at a tilted angle, the same process would create the lopsided pyramids. The researchers altered just one part of the production process, suggesting their approach could easily be applied to commercial manufacture of LEDs.

The researchers have filed for a patent on this research.

"Once we obtain the patent, we are considering collaborating with manufacturers in the field to commercialize this technology," said Yin. Other researchers who worked on the project were Jimmy Yao, Wenbin Zhu, Ju-Hung Chao, Annan Shang and Yun-Goo Lee, doctoral students in electrical engineering.