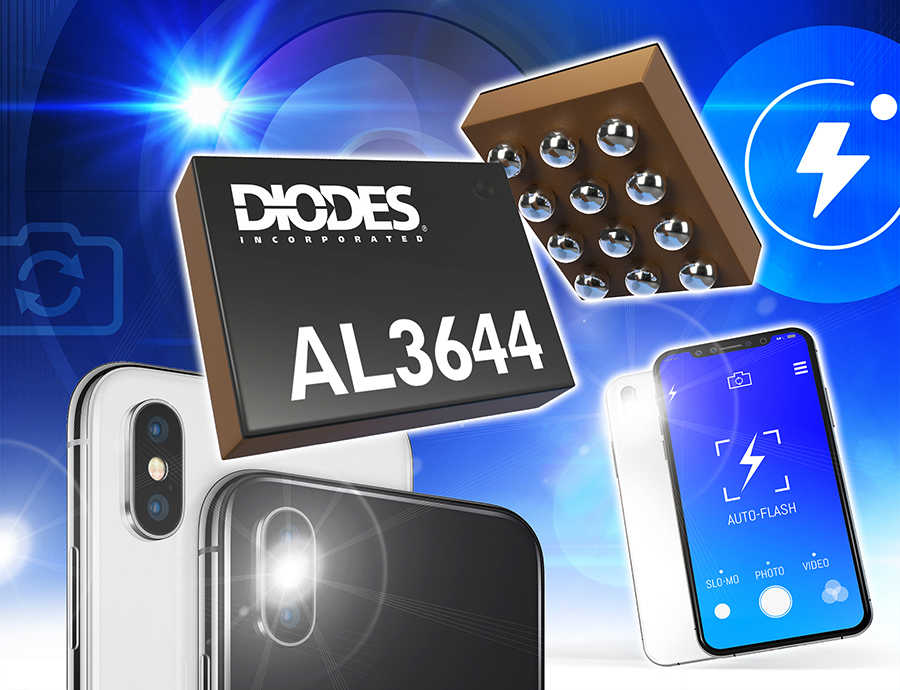 Plano, Texas - Diodes Incorporated announced the AL3644, a high-speed, dual-channel flash LED driver designed to support advanced camera flash and torch functionality, as offered by the latest smartphones and other portable consumer devices. Key features include independently controlled output currents configured through an I2C-compatible interface and the ability to combine two devices (with different device identification addresses) to drive four LEDs up to 6A for quad-channel applications. The AL3644 is offered in chip-scale packaging and combines flexible switching-frequency capabilities with constant output current.


The AL3644 employs a constant-frequency, synchronous-boost, current-mode PWM converter to deliver up to 1.5A for each of the two constant current sources across its 2.5V to 5V input voltage range. The I2C-compatible interface, operating at up to 400kHz, is used to configure the device to deliver a constant current at one of 128 levels between 1.4mA and 1.5A. The ratio between the two outputs is also adjustable through the I2C-compatible interface.


With the increasing trend towards portable and wearable devices that offer sophisticated camera functionality, including video, along with the convenience of a torch, the demand for highly flexible LED drivers is increasing. The AL3644 meets this need by offering dual, parallel current sources at efficiencies over 85% in both torch mode and flash mode.


As well as being the first LED driver from Diodes Incorporated to feature an I2C-compatible interface, the AL3644 also integrates a comparator that can be used with an external NTC to detect thermal variations. An input voltage monitor ensures the output current remains stable if, for example, the input voltage level drops as the device’s battery supply falls. Fault status bits, interrogated over the I2C-compatible interface, provide a host controller with operational data, such as flash current time-out, LED overtemperature, LED open/short failure, thermal shutdown, and input undervoltage.


The AL3644 and AL3644TT (signifying different device identification addresses) are available in low torch current and high torch current variants in a U-WLB1713-12 package measuring 1.75mm × 1.35mm and priced at $0.30 each in 1000 piece quantities.


Further information is available at www.diodes.com.