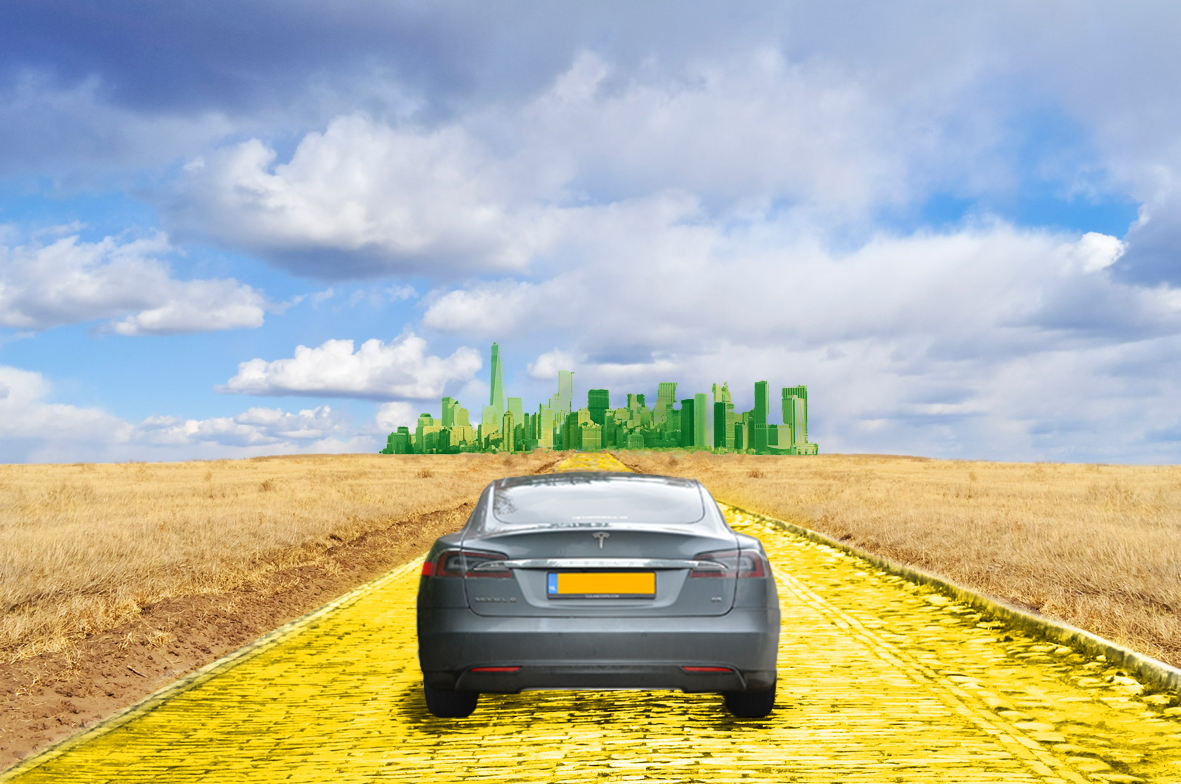 Growth in electric vehicle adoption is now exponential. According to the International Energy Agency ‘Global EV Outlook 2019’ document, there were over 5 million electric passenger cars on the roads in 2018, up 63% from 2017, with the figure set to reach 250 million in just ten years. This is in the EV30@30 scenario, where the goal, set by the Eighth Clean Energy Ministerial, is a 30% market share for electric vehicles in the total of all vehicles (except two-wheelers) by 2030.

However, this increase depends on increased charging infrastructure and expected technological advances to lower vehicle prices and importantly, to give better range. Battery and motor manufacturers are hitting physical limits for performance using known technologies, but in the drivetrain, where battery energy is converted into three-phase AC power for the motors, there is an obvious upgrade path away from traditional designs. This is to use wide band-gap semiconductors such as Silicon Carbide (SiC).

SiC, an iridescent crystal that glows yellow when electrically excited, might have been the brick paving in the land of Oz – it certainly would have good grip – its other name is carborundum. In modern times, EVs following the ‘yellow brick road’ towards a green future in the emerald city are increasingly likely to have SiC in their power electronics, displacing older IGBT technology.

SiC switches have not always been the ideal solution however, SiC-JFETs are inconveniently normally-ON devices and SiC-MOSFETs have very particular gate drive requirements, with gate threshold voltage varying strongly with temperature. SiC-MOSFETs also have significant ON-resistance for the voltage ratings needed in 400V and 800V drivetrains, making their conduction losses high at the current levels involved, typically over 100A. SiC-MOSFET ON-resistance also varies with temperature, like Si-MOSFETs, typically doubling from 25°C to 175°C. Famously, SiC can switch at very high frequencies, enabling smaller associated magnetic components, but in EV motor drive applications, the magnetic element is the motor, which is sized for torque and power, so switching frequency is often set at less than 10kHz and the value of SiC is questioned. The fast edge rates of SiC switches do still produce lower switching losses at these frequencies, compared with IGBTs with their long ‘tail’ currents, but conduction losses have still been problematic.

Some EV applications have picked up the technology though; battery chargers, auxiliary DC-DC converters and solid-state circuit breakers have benefited from SiC at lower power levels. Drivetrain power designers, however, have waited for SiC technology to progress towards acceptably low ON-resistance, better robustness and easier application. Now, a breakthrough in performance is addressing all of those concerns – the latest generation SiC-FET or ‘stacked cascode’ from UnitedSiC.

Latest generation SiC-FETs are the answer in EV drivetrains

So what is a ‘stacked cascode’? The principle is that you put a high-voltage SiC JFET in series with an optimized low voltage Si-MOSFET. When the gate is high the MOSFET shorts the JFET gate-source which turns it ON. When the gate is low, the MOSFET drain voltage rises but only to the point that the JFET pinches OFF, around 10V. The result is a normally-OFF device with an easy gate drive and with all the benefits of SiC as a wide band-gap semiconductor: low ON-resistance, high voltage and high-temperature operation, and an integral body diode effect with excellent reverse recovery characteristics. The MOSFET die is physically stacked on top of the JFET source pad as in Figure 1.

The cascode idea has been around since the time of vacuum tubes, but JFET versions are now achieving ON-resistances at high voltage ratings that are making then close to the ideal switch. Putting some figures to it, Table 1 is a selection of SiC-FETs from UnitedSiC showing RDS(ON) figures as low as 8.6 milliohms for a 1200V device and 6.7 Milliohms for a 650V device, both at 25°C. All devices are in the TO-247 package format, some with 4-lead Kelvin connections for optimum gate drive. 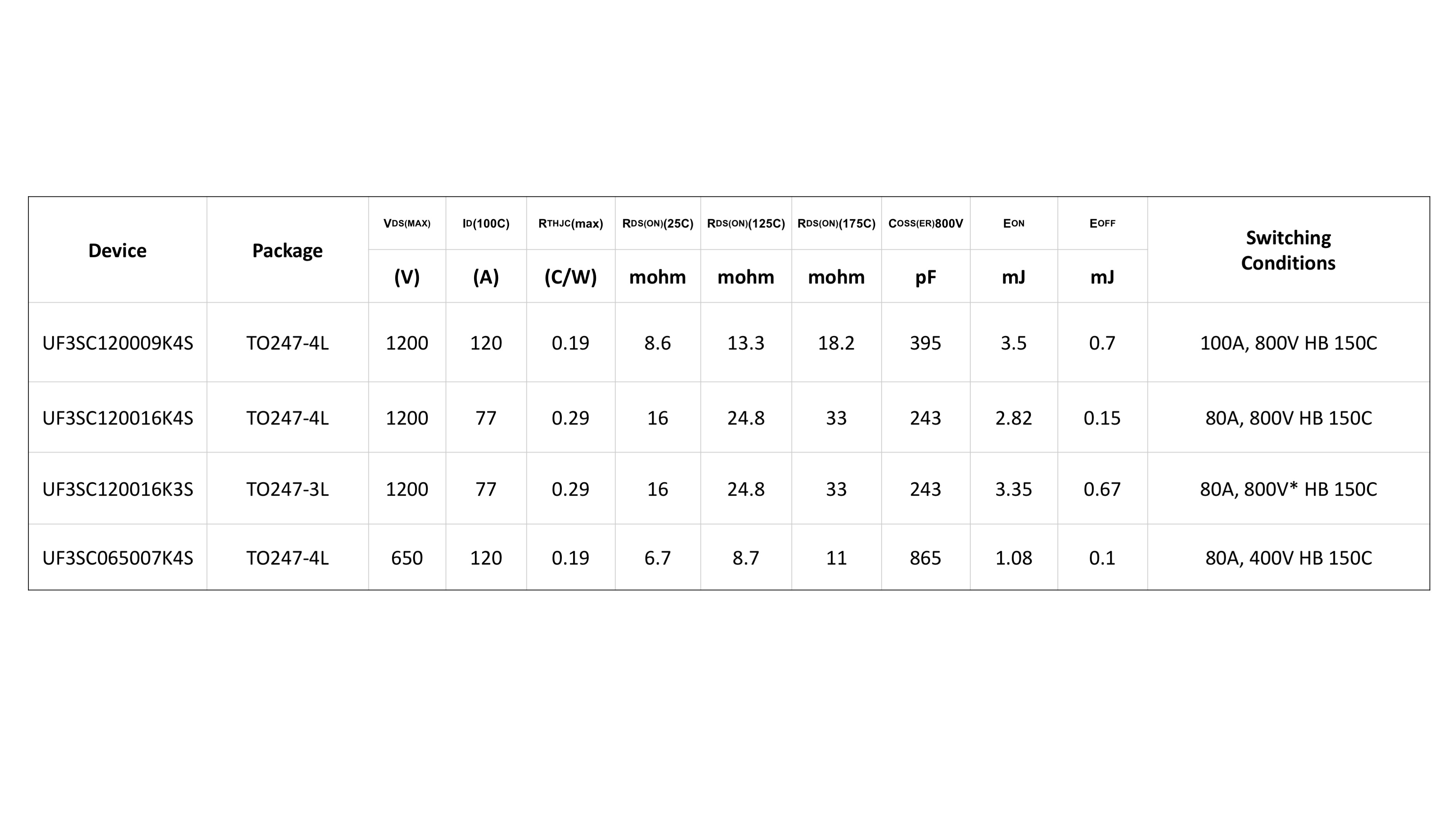 Minimized conduction losses resulting from the low RDS(ON) values are just part of the story; low values for output capacitance COSSand switching energy EONand EOFFalso reduce losses. It gets better – switches with inductive loads such as in motor drives have to ‘commutate’, that is, allow reverse conduction. In IGBT circuits, a high-voltage parallel diode is necessary to allow reverse current flow. This is an extra cost and the diodes need to be high performance with minimal reverse recovery energy loss. Si-MOSFETs have an integral reverse diode but it is a relatively poor performance with a high forward voltage drop and significant recovery losses.  The SiC-FET, however, allows reverse conduction through the channel with no reverse recovery effects and low forward drop, effectively across the already low ON-resistance. The stacked Si-MOSFET in the package also conducts in reverse but being an optimised low voltage type, its body diode drop is small and also contributes little in recovery losses. 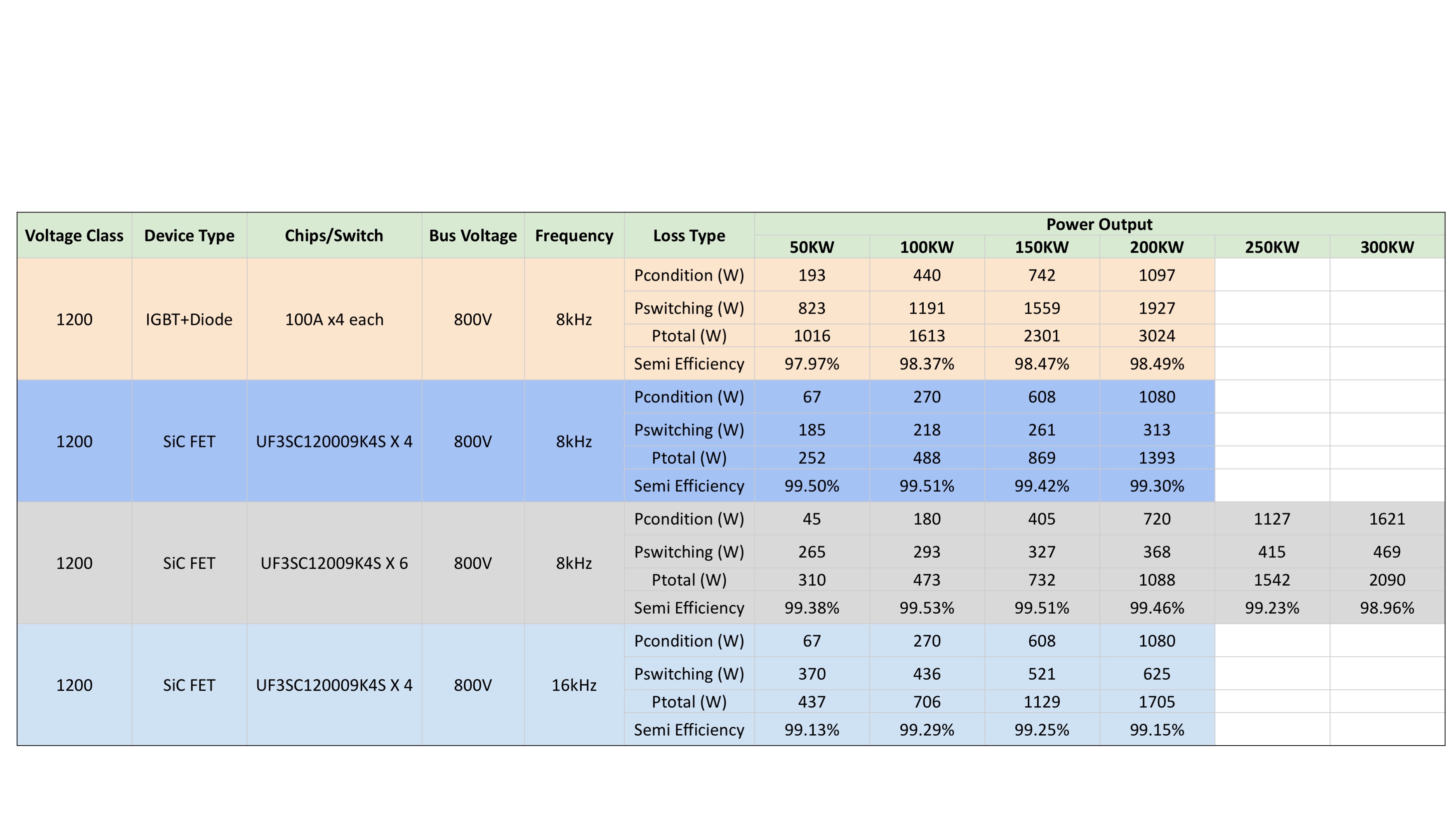 Efficiency achieved with the SiC-FET approach is consistently around 1% better than with IGBTs, representing nearly 4x reduction in power loss at the typical 100kW level and nearly 3x reduction at 200kW in the examples shown. In EV applications, this equates to more energy available for extended range and reduced cooling requirements leading to smaller and lighter heatsinking, leading in turn to reduced load on the vehicle and better range – a virtuous circle.

Wide band-gap technology is relatively new and there have been understandable concerns about practical reliability. Latest generation SiC-FET parts now have extensive testing data and use mature production processes to guarantee robustness. SiC-FETs particularly have built-in advantages; apart from the inherent high-temperature capability of silicon carbide, SiC-FETs have a self-limiting avalanche drain voltage characteristic with the channel self-biasing to active mode with overvoltage, absorbing transient energy up to several Joules.

This effect makes SiC-FETs easy to parallel with automatic current balancing, aided further by the relative insensitivity of the stacked MOSFET threshold voltage and reverse recovery characteristics to temperature changes.

SiC-FETs are also ideal in fast charger applications where they offer peak efficiency in PFC front ends as well as in the main DC-DC conversion stage, typically using phase-shifted full bridge or LLC topologies. Output rectification in high voltage chargers is often implemented with SiC diodes for their low drop and absence of reverse recovery losses, as synchronous rectification (SR) using Si-MOSFETs is complex at high voltage and can give no loss saving over diodes. However, SR using SiC-FETS with low RDS(ON) can tip the balance with UnitedSiC showing that at 100A, 50% duty cycle, 125°C, their UF3C065007K4S device has a loss of just 45W compared with 100W for a typical SiC diode. SR also opens up the possibility of bi-directional power flow, allowing the EV battery to return power to the grid for utility load-levelling for example, with corresponding financial benefit.

Solid state circuit breakers are an important application in EVs with the mandatory requirement to be able to isolate batteries during servicing and fault conditions. JFETs find a natural home here with their normally ON characteristic.

Backward compatibility is a bonus

With the UnitedSiC SiC-FETs available in TO-247 three- and four-lead packages, they can be a drop-in replacement for many IGBTs and Si-MOSFETs in motor drives, giving a significant efficiency boost with little change in the circuit, apart from perhaps gate drive resistors to tailor the switching edges. Gate drive voltage requirements are un-critical, typically 0-12V and other benefits could be considered such as reducing existing snubbers for lower loss and even removing parallel diodes in designs that were originally IGBT-based.

Follow the yellow brick road to a greener future

SiC-FETs have swept away reservations about using wide band-gap semiconductors in the demanding EV drivetrain application with the latest generation of low RDS(ON) devices from UnitedSiC.

When the land of Oz goes emissions-free, those yellow crystals are surely going to be in Dorothy’s EV as well as paving the roads.