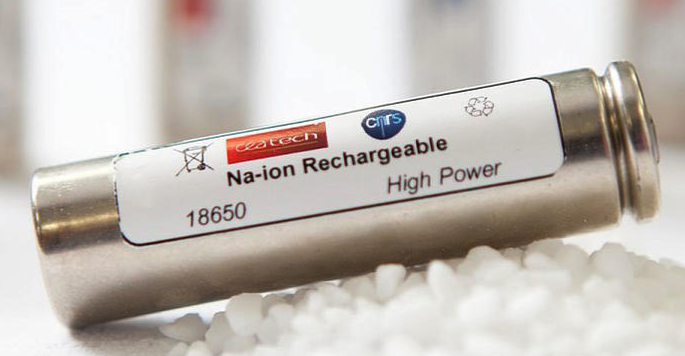 Prototype of a sodium-ion battery

A prototype of a sodium-ion battery has just been revealed by the RS2E, a French network bringing together researchers and industrial actors. This technology, inspired by the lithium-ion batteries already used in portable computers and electric vehicles, could lead to the mass storage of intermittent renewable energy sources.

The announcement should cause a stir in the highly competitive world of batteries. French researchers from the RS2E network revealed the first prototype of the sodium-ion "18650" battery, a standard format used notably in portable computers. The information may not sound exciting to non-specialists... Yet scientists across the globe, including the US, Japan, the UK, and Israel, are working on this technology—which today is considered the most serious alternative to the lithium-ion batteries that equip practically all portable electronic devices (portable computers, tablets, smartphones...)—and are beginning to take a serious look at electric vehicles. The battery used for Tesla cars, for example, is nothing more than the combination of several thousand "18650" lithium-ion batteries.

"The sodium-ion battery is directly inspired by lithium-ion technology," explains Jean-Marie Tarascon, the French battery "guru" who is a solid-state chemist at the CNRS, and professor at the Collège de France. Like lithium ions, sodium ions "travel" from one electrode to another, during the course of charging and discharging cycles, and they do so without in any way modifying the "host materials" located at each electrode, as the latter take the form of crystalline structures the ions can smoothly enter into... Its format, called "18650," indicates that it is presented in the form of a cylinder, with a diameter of 1.8 centimeters and a height of 6.5 centimeters.

Considered desirable objects today, sodium batteries have nevertheless come a long way. In the late 1980s, this technology had in fact been set aside in favor of lithium, whose superiority seemed obvious to all: thanks to a voltage of 3.5 V, lithium in theory provides the most energy. Being three times lighter than sodium ions, lithium ions also make it possible to produce very lightweight batteries, an undeniable asset when it comes to portable electronics. Lithium's only disadvantage is its (relative) rareness, and the fact that it is only found in a few specific locations (Colombia, Chile, China, etc.).

"When the electric vehicle market began to develop, we feared a surge in lithium prices, and sodium thus entered the race again,” Tarascon recalls. True enough, it has the significant advantage of being abundant (2.6% sodium can be found in the Earth's crust, compared with barely 0.06% lithium), and widely accessible, notably in seawater in the form of sodium chloride (NaCl).

In 2012, the French researcher decided to take the bull by the horns and make the most of France's know-how in sodium batteries. "For lithium, all fundamental research had been conducted in Europe, especially in France," Tarascon points out. "Yet it was in Japan that the technology was transferred and brought to market, allowing Sony to launch its first lithium-ion battery in 1991. As a result, 95% of Li-ion production today takes place in Asia." It is out of the question to repeat history. The CNRS (responsible for fundamental research) and the LITEN-CEA (in charge of technology transfer) have thus joined forces with around 15 industrial players such as Renault, Saft, and Alstom to create the RS2E network dedicated to new-generation batteries. Their stated objective is to ensure research AND development, in order to bring sodium-ion batteries to market on European soil as soon as they are ready.

A global market worth $80 billion

The commercial possibilities are indeed immense. The global market for batteries should reach 80 billion dollars in 2020, twice that of today. Too large for the time being to equip portable electronic devices, sodium-ion batteries could secure a privileged position in the electric vehicle market, as well as in the storage of intermittent renewable energies, such as wind or solar power. Energy stored during the day or in windy weather could be subsequently released using batteries (or rather series of batteries) potentially the size of a house! Another possible market is that of domestic batteries, which the founder of the Tesla car, the Californian Elon Musk, launched with much publicity in April 2015. His "power wall," a mural battery meant to be installed in individual households, is intended to store the energy produced by solar panels fitted directly on the house's roof, as well as to regulate consumption by storing electricity during off-peak hours, when it is less expensive.

"The 18650 format enables us to provide proof of concept , and compare the performance of our batteries with those of similar format that are already available on the market. However, other formats will need to be designed to meet new requirements," explains Simonin. Time is of the essence, as Toyota are working relentlessly on a prototype of a sodium-ion car battery, while the British startup Faradion, in association with Oxford University, made a first demonstration this year of an electric bicycle powered by a sodium-ion battery.