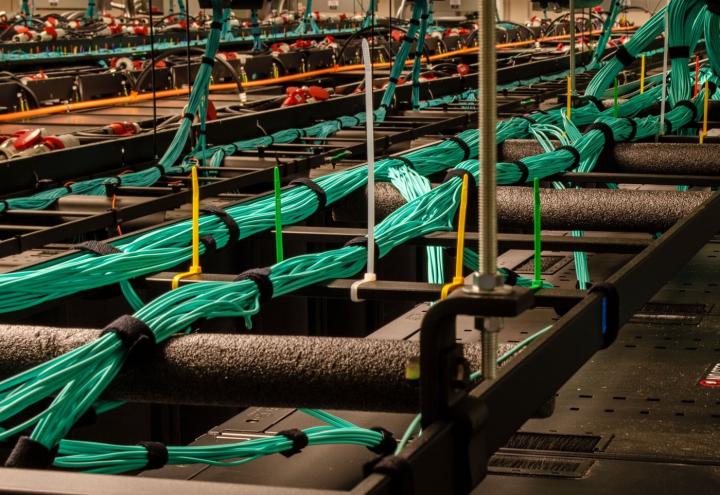 Over 50 miles of network interconnect cabling enable Frontera's compute nodes to communicate to each other and to the network servers.

The Frontera supercomputer at the Texas Advanced Computing Center (TACC) earned the #5 spot on the twice-annual Top500 list , which ranks the world's most powerful non-distributed computer systems. Located at The University of Texas at Austin, the National Science Foundation (NSF)-supported Frontera is the fastest university supercomputer in the world.

Frontera achieved 23.5 PetaFLOPS on the high-performance LINPACK benchmark, a measure of the system's floating point computing power. To match what Frontera can compute in just one second, a person would have to perform one calculation every second for about a billion years. The main system's theoretical peak performance will be 38.7 PetaFLOPS.

When Frontera goes into full operation later this summer, it will support dozens of research teams aiming to solve the most massive computational problems in their fields, including high-resolution climate simulations, molecular dynamics models with millions of atoms, and machine learning-enabled cancer studies.

"Many of the frontiers of research today can only be advanced using computing," said TACC Executive Director Dan Stanzione. "Frontera will be an important tool to solve Grand Challenges that will improve our nation's health, well-being, competitiveness, and security."

"Frontera demonstrates what is possible when TACC, Dell Technologies and our industry partners collaborate on innovation at its very essence," said Thierry Pellegrino, vice president of Dell EMC High Performance Computing. "We take great pride in working with TACC to stand up this incredibly powerful system and look forward to aiding in new discoveries and advancements."

"We are excited to see our HDR InfiniBand accelerating a world-leading supercomputer at TACC," said Gilad Shainer, senior vice president of marketing at Mellanox Technologies. "We have a long history of great collaborations with TACC and are looking forward to continue working with TACC on future HPC and AI missions."

Supported by a $60 million award from NSF, Frontera will provide U.S. academic researchers, and international researchers through collaborations, with the most advanced capabilities for science and engineering.

Phase one of the NSF grant funded the acquisition and deployment of Frontera -- a leadership-class resource that offers the highest scale, throughput, and data analysis capabilities ever deployed at a university in the U.S. Phase two will support the design of a follow-up system in five years that will be 10 times more powerful.

"Frontera will provide scientists across the country with access to unprecedented computational modeling, simulation, and data analytics capabilities," said Jim Kurose, NSF Assistant Director for Computer and Information Science and Engineering. "Frontera represents the next step in NSF's more than three decades of support for advanced computing capabilities that ensure the U.S. retains its global leadership in research frontiers."

Frontera is unique among the top systems in the world in its use of Intel Xeon processors to provide its primary computing power. Intel x86 architecture is the most widely used standard in computing, and requires fewer changes to scientific software codes to run.

"Congratulations to the Texas Advanced Computing Center on the Top-5 ranking of the new Frontera supercomputer," said Trish Damkroger, Vice President and General Manager of Intel's Extreme Computing Organization. "The innovation and scientific discovery that TACC will be able to research using 2nd Gen Intel Xeon Scalable processors will enable new insights and discoveries that will advance the industry."

Early users, who were awarded access to the system by NSF through a competitive process, are beginning to use Frontera now. The system enters full production in August, supporting hundreds of the nation's most experienced computational scientists in areas ranging from high-energy physics to genomics to artificial intelligence.

Frontera joins more than a dozen advanced computing systems currently deployed at TACC, including Stampede2, the 19th fastest system in the world and the 2nd most powerful supercomputer at a U.S. university. Frontera is the fourth top-15 system TACC has built in the past 10 years (Ranger, Stampede1, Stampede2, Frontera), enabling breakthrough discoveries in fields ranging from astrophysics, materials science, to the life sciences.

"TACC is proud to deploy this amazing NSF-funded resource, built to support the needs of the science and engineering community," Stanzione said. "We look forward to the discoveries Frontera will enable."