An international research team led by the University of Bern has succeeded in developing an electrocatalyst for hydrogen fuel cells.... 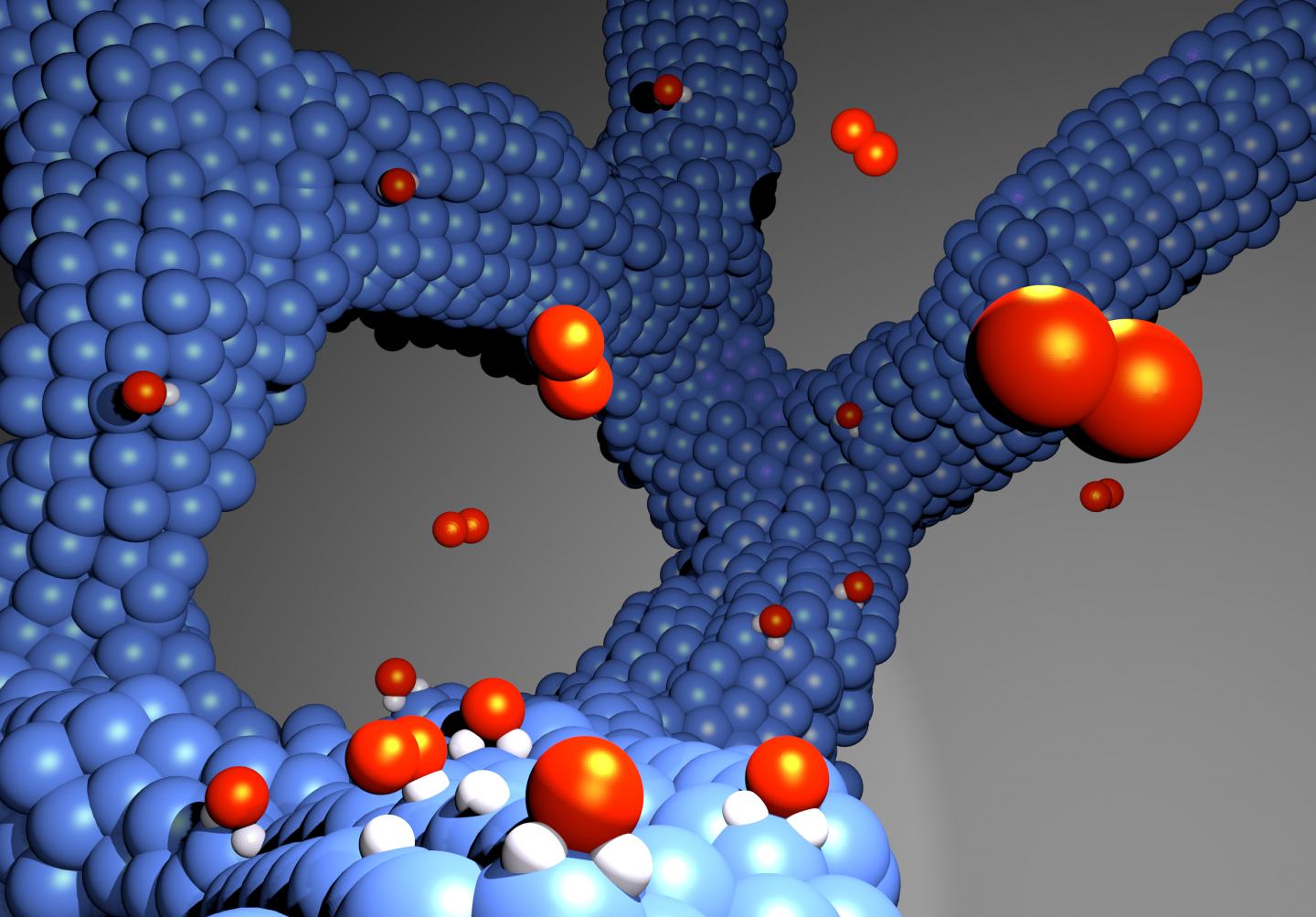 The new electrocatalyst for hydrogen fuel cells consists of a thin platinum-cobalt alloy network and, unlike the catalysts commonly used today, does not require a carbon carrier.

Fuel cells are gaining in importance as an alternative to battery-operated electromobility in heavy traffic, especially since hydrogen is a CO2-neutral energy carrier if it is obtained from renewable sources. For efficient operation, fuel cells need an electrocatalyst that improves the electrochemical reaction in which electricity is generated. The platinum-cobalt nanoparticle catalysts used as standard today have good catalytic properties and require only as little as necessary rare and expensive platinum. In order for the catalyst to be used in the fuel cell, it must have a surface with very small platinum-cobalt particles in the nanometer range, which is applied to a conductive carbon carrier material. Since the small particles and also the carbon in the fuel cell are exposed to corrosion, the cell loses efficiency and stability over time.

An international team led by Professor Matthias Arenz from the Department of Chemistry and Biochemistry (DCB) at the University of Bern has now succeeded in using a special process to produce an electrocatalyst without a carbon carrier, which, unlike existing catalysts, consists of a thin metal network and is therefore more durable. "The catalyst we have developed achieves high performance and promises stable fuel cell operation even at higher temperatures and high current density," says Matthias Arenz. The results have been published in Nature Materials. The study is an international collaboration between the DCB and, among others, the University of Copenhagen and the Leibniz Institute for Plasma Science and Technology, which also used the Swiss Light Source (SLS) infrastructure at the Paul Scherrer Institute.

In a hydrogen fuel cell, hydrogen atoms are split to generate electrical power directly from them. For this purpose, hydrogen is fed to an electrode, where it is split into positively charged protons and negatively charged electrons. The electrons flow off via the electrode and generate electric current outside the cell, which drives a vehicle engine, for example. The protons pass through a membrane that is only permeable to protons and react on the other side on a second electrode coated with a catalyst (here from a platinum-cobalt alloy network) with oxygen from the air, thus producing water vapor. This is discharged via the "exhaust".

The important role of the electrocatalyst

For the fuel cell to produce electricity, both electrodes must be coated with a catalyst. Without a catalyst, the chemical reactions would proceed very slowly. This applies in particular to the second electrode, the oxygen electrode. However, the platinum-cobalt nanoparticles of the catalyst can "melt together" during operation in a vehicle. This reduces the surface of the catalyst and therefore the efficiency of the cell. In addition, the carbon normally used to fix the catalyst can corrode when used in road traffic. This affects the service life of the fuel cell and consequently the vehicle. "Our motivation was therefore to produce an electrocatalyst without a carbon carrier that is nevertheless powerful," explains Matthias Arenz. Previous, similar catalysts without a carrier material always only had a reduced surface area. Since the size of the surface area is crucial for the catalyst's activity and hence its performance, these were less suitable for industrial use.

The researchers were able to turn the idea into reality thanks to a special process called cathode sputtering. With this method, a material's individual (here platinum or cobalt) are dissolved (atomized) by bombardment with ions. The released gaseous atoms then condense as an adhesive layer. "With the special sputtering process and subsequent treatment, a very porous structure can be achieved, which gives the catalyst a high surface area and is self-supporting at the same time. A carbon carrier is therefore superfluous," says Dr. Gustav Sievers, lead author of the study from the Leibniz Institute for Plasma Science and Technology.

"This technology is industrially scalable and can therefore also be used for larger production volumes, for example in the automotive industry," says Matthias Arenz. This process allows the hydrogen fuel cell to be further optimized for use in road traffic. "Our findings are consequently of importance for the further development of sustainable energy use, especially in view of the current developments in the mobility sector for heavy goods vehicles," says Arenz.