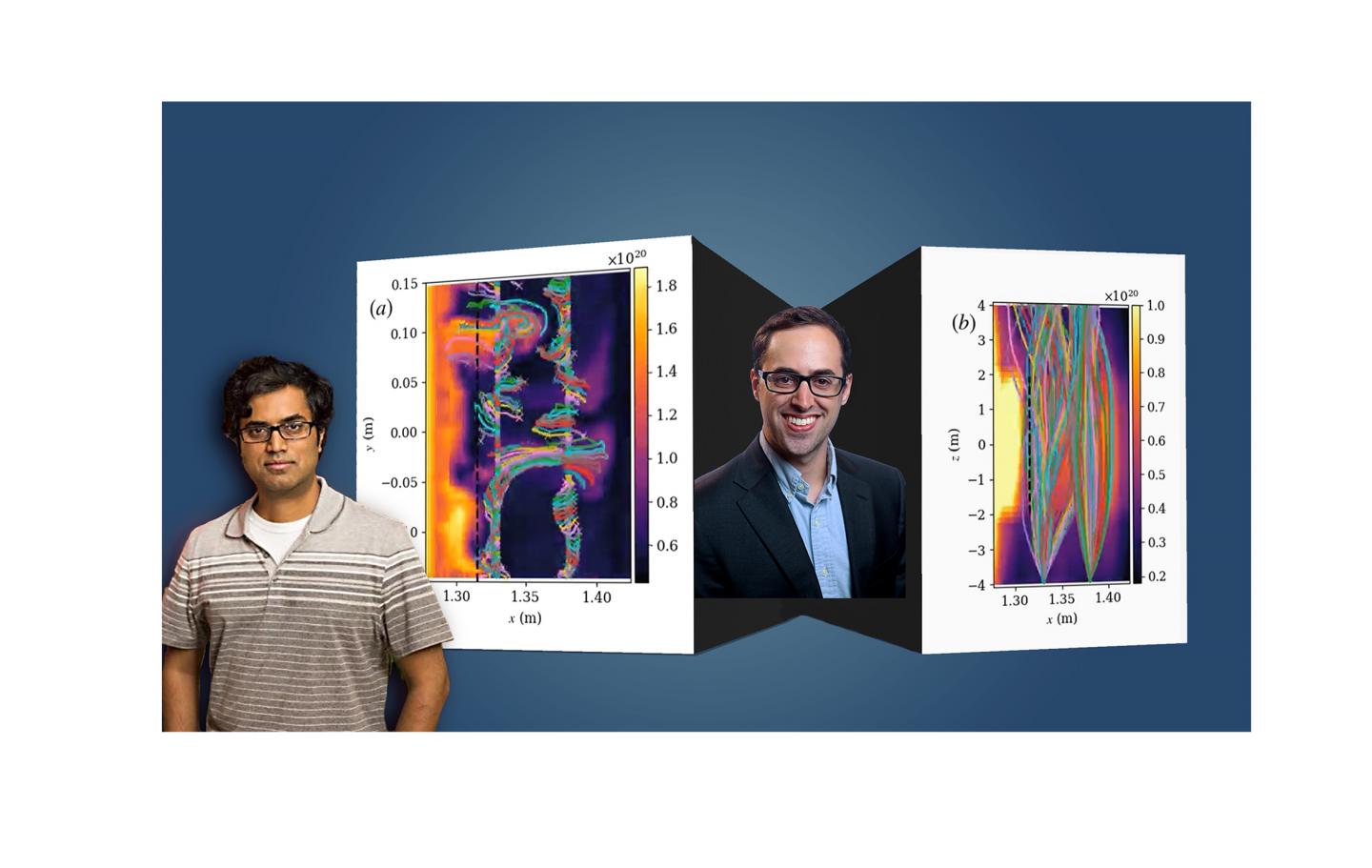 PPPL physicist Ammar Hakim, left, and graduate student Noah Mandell with figures from Mandell's paper showing the first computer simulations of kinetic plasma turbulence near the edge of fusion devices that can account for fluctuations of magnetic field lines.

A major roadblock to producing safe, clean and abundant fusion energy on Earth is the lack of detailed understanding of how the hot, charged plasma gas that fuels fusion reactions behaves at the edge of fusion facilities called "tokamaks." Recent breakthroughs by researchers at the U.S. Department of Energy's (DOE) Princeton Plasma Physics Laboratory (PPPL) have advanced understanding of the behavior of the highly complex plasma edge in doughnut-shaped tokamaks on the road to capturing the fusion energy that powers the sun and stars. Understanding this edge region will be particularly important for operating ITER, the international fusion experiment under construction in France to demonstrate the practicality of fusion energy.

Among the first-of-a-kind findings has been the discovery that accounting for the turbulent fluctuations in the magnetic fields that confine the plasma that fuels fusion reactions can significantly reduce the turbulent particle flux near the plasma edge. Computer simulations show that the net particle flux can go down by as much as 30 percent, despite the fact that the average magnitude of turbulent particle density fluctuation goes up by 60 percent -- indicating that even though the turbulent density fluctuations are more virulent, they are moving particles out of the device less effectively.

Researchers have developed a specialized code called "Gkeyll" -- pronounced just like "Jekyll" in Robert Louis Stevenson's "The Strange Case of Dr. Jekyll and Mr. Hyde" -- that makes these simulations feasible. The mathematical code, a form of modeling called "gyrokinetics," simulates the orbiting of plasma particles around the magnetic field lines at the edge of a fusion plasma.

"Our recent paper summarizes the Gkeyll group's efforts in the area of gyrokinetic simulation," said PPPL physicist Ammar Hakim, lead author of a Physics of Plasmas paper (link is external) that provides an overview of the group's achievements, based on an invited talk he gave at the American Physical Society's Division of Plasma Physics (APS-DPP) conference last Fall. The research, coauthored by scientists from six institutions, adapts a state-of-the-art algorithm to the gyrokinetic system to develop the "key numerical breakthroughs needed to provide accurate simulations," Hakim said.

Such breakthroughs are part of the worldwide effort to grasp the science behind the production of fusion reactions on Earth. Fusion reactions combine light elements in the form of plasma -- the hot, charged state of matter composed of free electrons and atomic nuclei that makes up 99 percent of the visible universe -- to generate massive amounts of energy that could provide a virtually inexhaustible supply of power to generate electricity for humanity.

Noah Mandell, a graduate student in the Princeton University Program in Plasma Physics, built on the team's work to develop the first gyrokinetic code able to handle magnetic fluctuations in what is called the plasma scrape-off layer (SOL) at the edge of tokamak plasmas. The British Journal of Plasma Physics has published andhighlighted his report as a featured article (link is external).

Mandell explores how blob-like plasma turbulence bends magnetic field lines, leading to the dynamics of "dancing field lines." He finds that field lines usually move smoothly but when dancing can abruptly reconfigure into reconnection events that cause them to converge and violently snap apart.

For a video of first computer simulations of kinetic plasma turbulence near the edge of fusion devices click here (link is external).

Mandell's findings are best described as "proof-of-concept" with regard to the magnetic fluctuations, he said. "We know there are more physical effects that need to be added to the code for detailed comparisons with experiments, but already the simulations are showing interesting properties near the plasma edge," he said. "The ability to handle bending of the magnetic field lines will also be essential for future simulations of edge localized modes (ELMs), which we would like to do better to understand the bursts of heat they cause that must be controlled to prevent tokamak damage."

What makes this finding unique is that previous gyrokinetic codes have simulated SOL blobs but assumed that the field lines were rigid, Mandell noted. Extending a gyrokinetic code to calculate the movement of magnetic fields lines is computationally very challenging, requiring special algorithms to ensure that two large terms balance each other to an accuracy of better than 1 part in a million.

Moreover, while codes that model turbulence in the core of the tokamak can include magnetic fluctuations, such codes cannot simulate the SOL region. "The SOL requires specialized codes like Gkeyll that can handle much larger plasma fluctuations and interactions with the walls of the reactor," Mandell said.

Future steps for the Gkeyll group will include investigating the precise physical mechanism that affects the dynamics of the plasma edge, an effect likely connected to the bending field lines. "This work provides stepping stones that I think are very important," Hakim said. "Without the algorithms that we made, these findings would be very difficult to apply to ITER and other machines."