Rice U. engineers develop flying sensors that coordinate to warn communities of pollutants 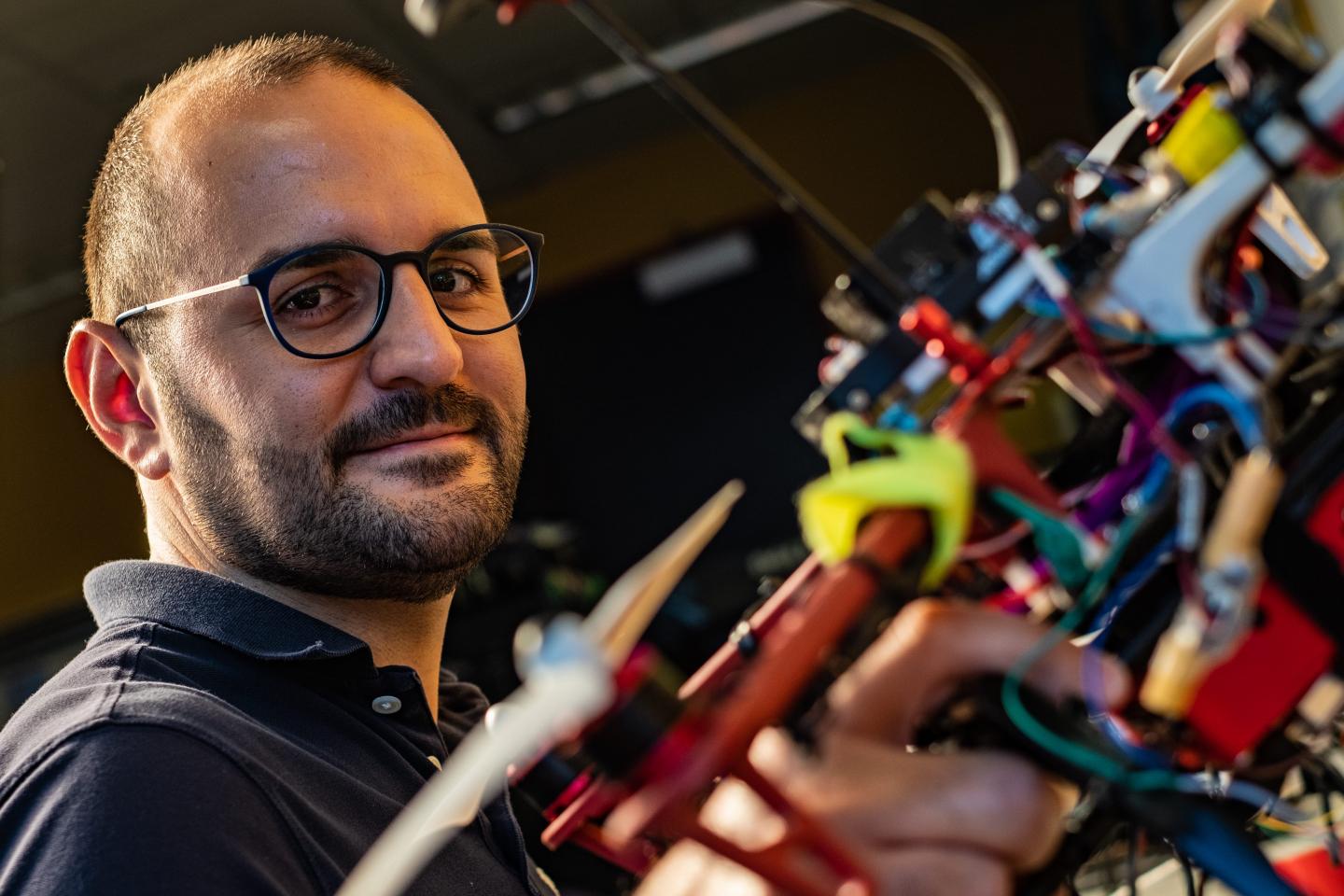 Rice University postdoctoral researcher Riccardo Petrolo shows one of several autonomous aerial drones being prepared to monitor for pollutants. The National Science Foundation awarded a grant to the Rice lab of electrical and computer engineer Edward Knightly to develop the platform.

Rice University researchers, in a collaboration with Baylor College of Medicine and Houston nonprofit Technology For All (TFA), are developing a fleet of autonomous aerial drones that coordinate with each other to detect, track and model the environment and let neighborhoods know of airborne perils that can be especially hazardous following extreme weather events.

Rice electrical and computer engineer Edward Knightly and his collaborators have won a National Science Foundation grant for $1.5 million to enable ASTRO, an aerial system to gather real-time, high-resolution data about volatile organic compounds (VOCs) released into the atmosphere by way of leaks, explosions or other accidents.

Early prototypes of the networked drones were demonstrated by Rice students who developed software protocols as their capstone design project at the Oshman Engineering Design Kitchen earlier this year. That project won the award for best gaming, creative, robotics or innovative technology award at the annual George R. Brown Engineering Design Showcase.

The new grant will allow the project team to not only continue to develop next-generation wireless and sensing technologies but to eventually deploy them in vulnerable locations.

"Now, if there's a chemical leak, people may not learn about it for a couple of days, but our system can inform them immediately through their mobile phones," said Riccardo Petrolo, a postdoctoral researcher in Knightly's lab. "We are also concerned about the dangers first responders might face during extreme events like Hurricane Harvey. We want them to know where the edge of a plume is located so they know where it's safe to breathe and where to set evacuation boundaries."

When properly rigged, multiple ASTRO drones will assemble a three-dimensional record of aerial pollution using advanced modeling techniques developed by Rice environmental engineering professor Rob Griffin. The researchers hope to deploy ASTRO for testing in a neighborhood near the Houston Ship Channel, home to industrial processing plants and chemical refineries. Cliff Dacso, a professor of molecular and cell biology at Baylor, will guide the team's analysis to focus on VOC signatures that are most detrimental to human health.

That community, on Houston's east side, is already being served by Rice engineers who worked with TFA to deploy a sophisticated Wi-Fi network in 2011. Together with Will Reed, TFA president and project team member, the researchers would like to capitalize on that connection so drones can serve information about air quality to residents of the neighborhood in real time.

ASTRO's unique abilities will allow the system to work without intervention from a person or a ground controller. Yingyan Lin, a Rice professor of electrical and computer engineering, is designing custom machine-learning methods for the project. "We might need someone in a car to pick them up, or they might have a base station on the ground, but day to day, they should be able to take off, track plumes and send that information back through the internet," Petrolo said.

Drones will have on-board sensors and transmitters that coordinate among themselves to find and track the plumes. Petrolo said Rice engineering colleagues led by laser pioneer and emeritus professor Frank Tittel are working to shrink the size of the sensors.

Petrolo said ASTRO's capabilities will stretch beyond gas sensing. "The platform is fully agnostic," he said. "There's no reason it can't support cameras and other wireless sensors to, for instance, find someone in an emergency response situation."

Petrolo said the technology will allow the use of as few or as many drones as necessary to perform a task.